A few days ago, I had a post about the new proposed 2m beacon for St Helena Island. Dee, ZR1DEE has very kindly sent on some additional information. 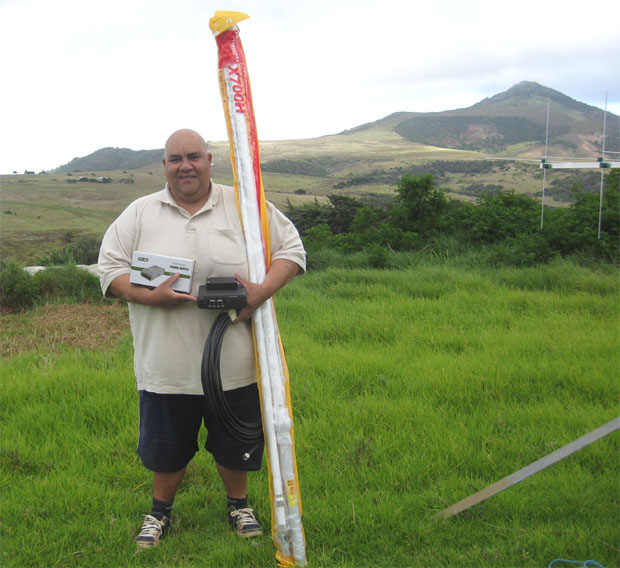 As of the 4th of February, the antenna still needs to be installed and then the beacon will be turned on.

Now we wait for the Diamond antenna to be erected and BEACON SWITCHED ON
* * *
Update 16th Feb 2021: Photos of the new antenna at the bottom of this post.
* * *

Analysis... Let's have a look at where St Helena is and who is likely to hear this beacon. 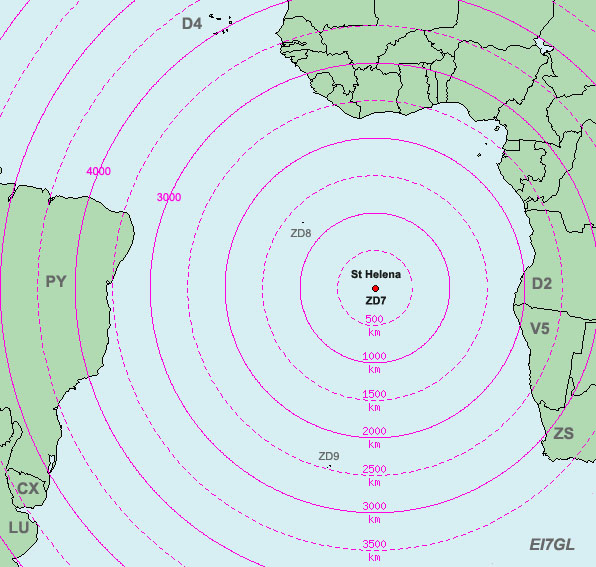 As the map shows, St Helena Island is a lonely spot situated way out in the South Atlantic Ocean and it's a long way from everywhere.

Tropo... The coast off the west coast of South Africa and Namibia has some excellent conditions for marine ducting of VHF & UHF signals at times and the path from South Africa to St Helena has already been bridged on 144 MHz and 433 MHz. It's likely that the new beacon will be very useful as a propagation indicator for these type of openings.

Looking further north, the path to the African coast is in the region of 2500kms but it's likely that a lack of active stations in these coastal states will be a limiting factor. The dominance of low pressure systems close to the equator may also be a factor in preventing long distance tropo paths.

The path to D4VHF on the Cape Verde Islands is over 4000 kms and probably unlikely.

The real test however will be the path to Brazil in South America. Is it possible??

As the map shows above, there is a 2000km stretch of Brazilian coastline which is about 3500kms from St Helena. While the north-west corner of Brazil is about 400kms closer, it is also closer to the Equator and the low pressure area. My own guess is that the more southerly Brazilian stations might have a better chance of hearing the St Helena beacon on 144 MHz.

There is also the chance of some Sporadic-E at these latitudes which might help with 2000kms or so of any path. Between a combination of Sporadic-E and some marine ducting, I suspect the path to Brazil should be possible.

Trans-Equatorial Propagation (TEP)... Another possible path is via TEP to an area around the south of Spain. 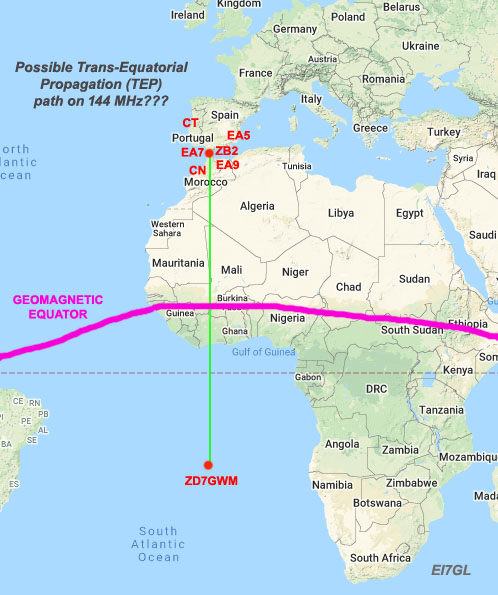 We'll have to wait and see. It'll be interesting to see who hears the beacon and how often.

Greetings All!  Beacon for St Helena Island and more….

Kobus ZS3JPY was instrumental in restarting up having a beacon for St Helena Island. Well, the time has come, and it is happening as history is being made!

Now, let’s follow the journey of the beacon and more….

Beacon frequencies:-
Channel 1: 144.475
Channel 2: 144.325
Channel 3: 144.375
Channel 4: 144.385
Garry ZD7GWM received the three boxes today (21 January 2021). He is smiling!
Sponsors were :
Diamond Antenna
Sam ZS6BRZ radio accessories X700H Diamond antenna with transport cost to Cape Town
Leon ZS6LMG and Linda ZS6LML CDS 20Amp power supply and 25m LMR400 coax and connectors.
CW Beacon from Marcos PY1MHZ Brazil
Also another Marcos, from Mcom Electronica, Brazil being the designer and programmer of the beacon, was instrumental in working with Naz ZS1NAZ to re programme the beacon he designed and built
Pieter V51PJ for the VHF radio, and fitting the CW beacon into the radio
Johan V51JH on holiday in RSA to transport the equipment to Naz ZS1NAZ
Pieter ZS3PV donated another VHF radio as a spare for back up and
Deon ZS6DEB From Bicom also donated a VHF radio for back up.
A golf shirt was made for Garry ZD7GWM with the Amateurs call signs that he worked in ZS1 and ZS3. The golf shirt was sponsored by Charles ZS1CF and xyl Hannelie.  All of the equipment arrived at ZS1NAZ Naz’s qth. Kobus ZS3JPY asked Naz ZS1NAZ to test the beacon and it worked fine, and while on test, DISASTER! The beacon started transmitting gibberish and the radio stopped putting out power. The race was on to find spare parts and get the beacon sorted ASAP. Naz ZS1NAZ contacted Kobus ZS3JPY to explain to him what had happened. Kobus said: “Don’t worry I will make a plan’’.  The plan was such that Kobus spoke to Deon ZS6DEB who sent a radio to Kobus. 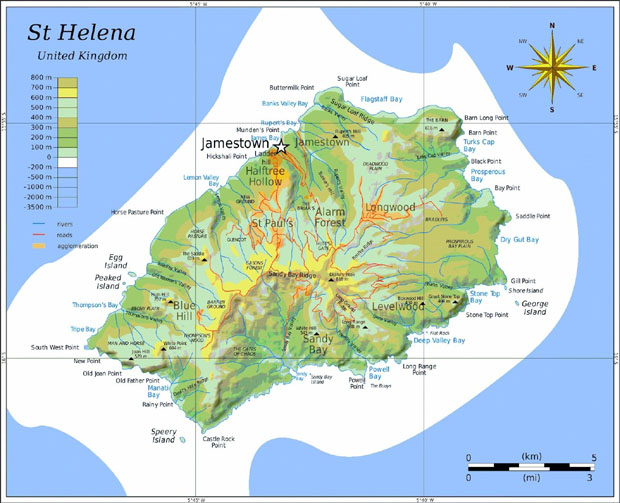 The next operation was to get the equipment to St Helena Island. Kobus ZS3JPY and Naz ZS1NAZ made many phone calls and eventually found the ship leaving to St Helena Island the first week in January 2021. Garry ZD7GWM received the equipment from Customs today (21 January 2021) He even took a day off work to go and collect, so you can only imagine his excitement! He was so overjoyed today that he said: “Finally, it’s here!” with a big smile in his voice.
A hearty Thank You to all the sponsors, and everybody else who contributed unselfishly, in making the St Helena Beacon Project a success.   A special note of thanks goes to Kobus ZS3JPY and his wife, Michelle ZR3TO. Through all this, Kobus ZS3JPY had his leg amputated, was in great pain most of the time, and still managed to pull off the Beacon Project.
Writer Dee ZR1DEE
* * *
Update 16th Feb 2021: The Diamond antenna for 144 MHz has now been mounted on a pole so that beacon operation can begin.
See photos below....
1) The Diamond X700H certainly isn't a small antenna as it's some 7.2 metres in length. The photo below shows Garry, ZD7GWM putting the internal sections together. 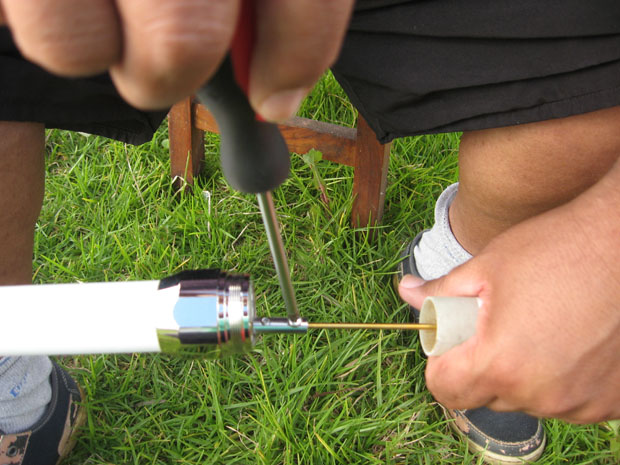 2) The fibreglass sections are held together with a series of compression clamps. 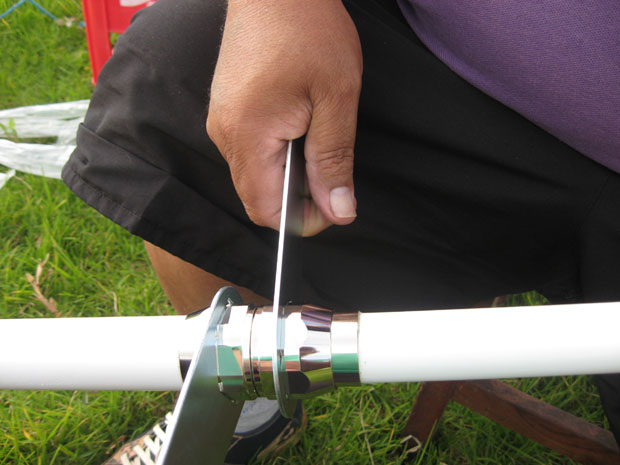 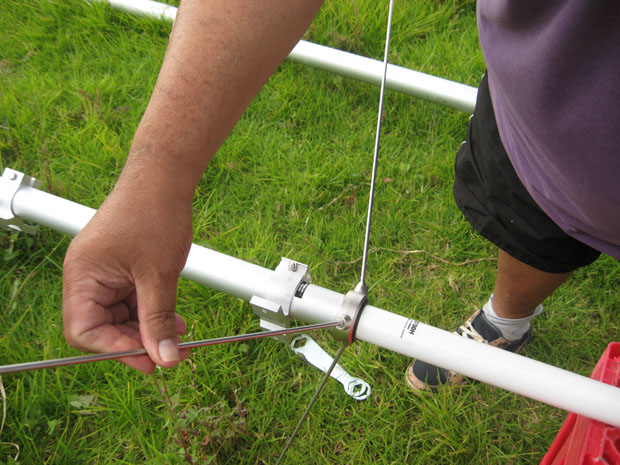 4) After assembly, the antenna was tested first on a short stub mast. 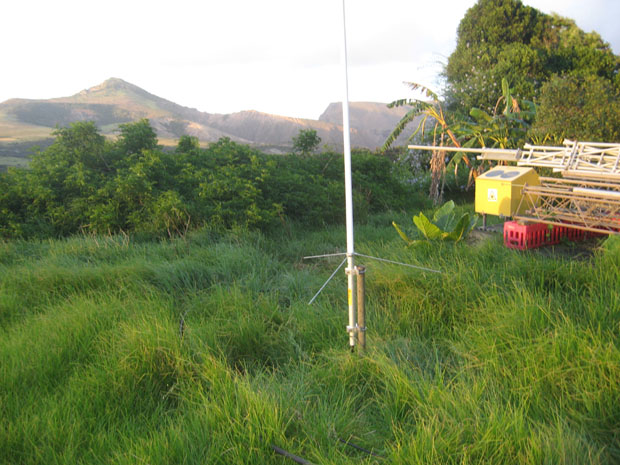 5) The antenna is mounted on a long pole with the guy wires attached... 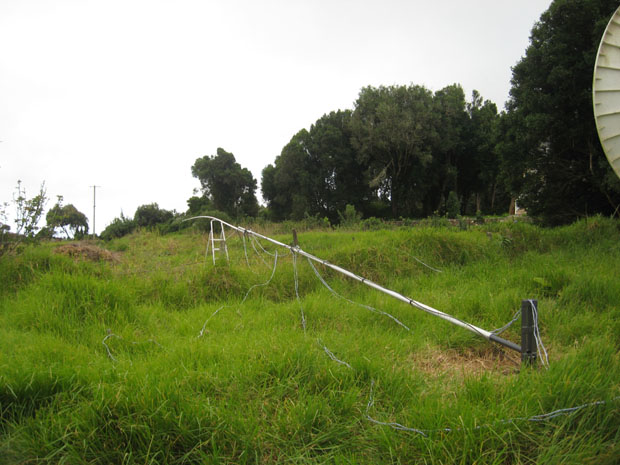 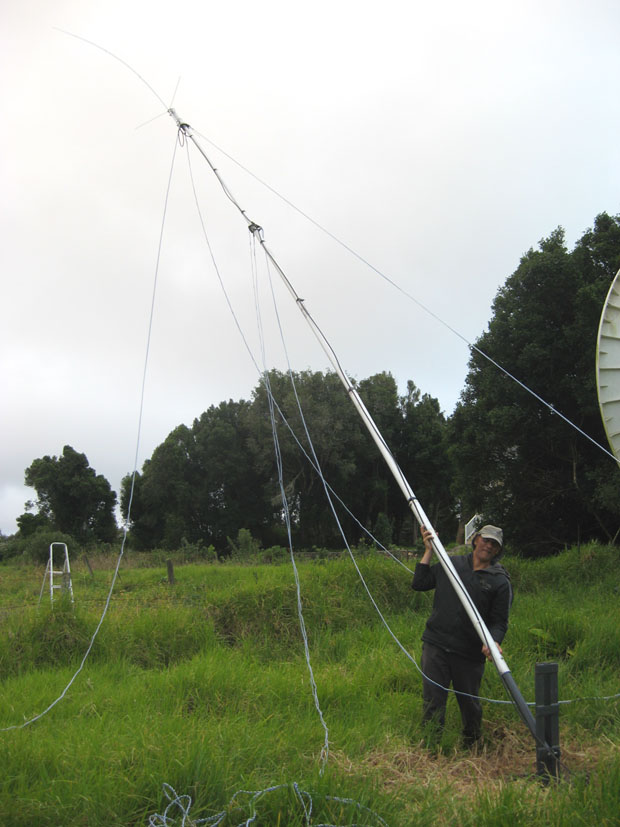 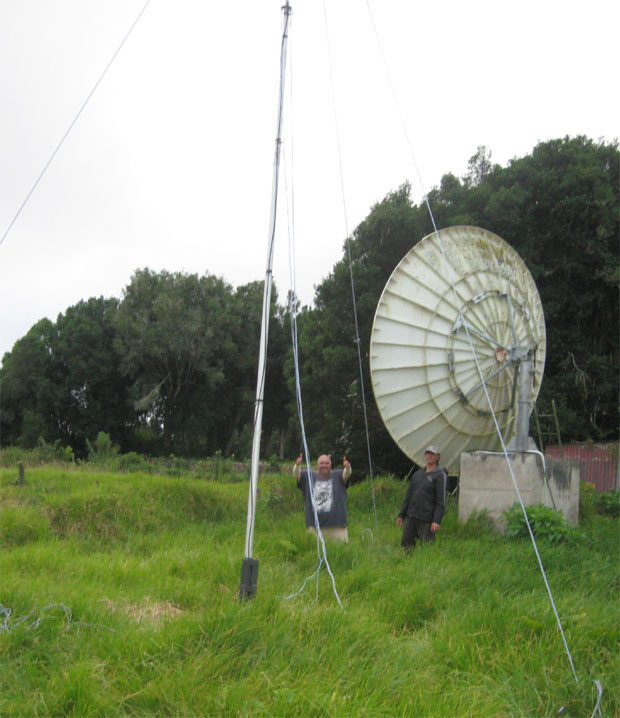