On the 16th of October 2020, there was a remarkable 3000+ km contact made on the 70cms band between South Africa and St.Helena in the South Atlantic. 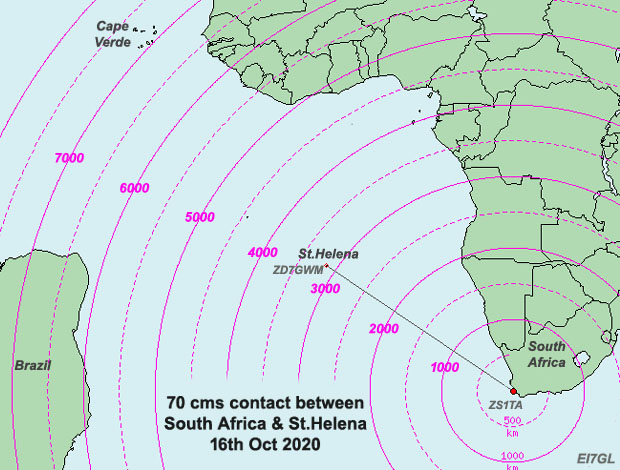 The contact at 433 MHz was made between Garry, ZD7GWM on St.Helena Island and Tom, ZS1TA in South Africa. The distance was approximately 3136 kms and what was even more amazing was that the contact was made on FM!

The power used for the contact was a modest 35 watts into a vertical antenna. This was a new distance record for a contact between South Africa and St.Helena on the 70cms band.

The mode of propagation was probably a marine duct as shown by this tropo forecast map from Pascal, F5LEN. 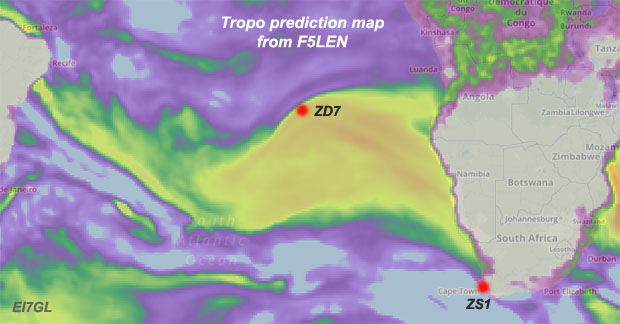 This 3000km+ tropo path between South Africa and St.Helena opens up on a reasonably regular basis. Back in November of 2018, there was an opening on 144 MHz as outlined in this previous post.

To put these remarkable contacts on 144 MHz and 433 MHz into context, the 3136 km distance is equivalent to the path across the North Atlantic between Newfoundland and Ireland.