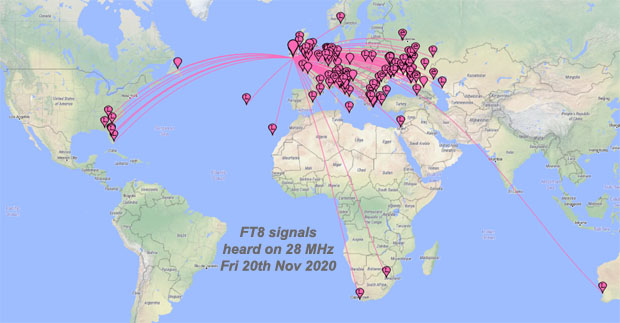 There was evidence of some Sporadic-E to central Europe as well as F2 signals out around the 3000km mark from Greece to Russia. Even a lone signal from the west of Australia made it through.

The signals that were of real interest to me however were the ones from the south-east of the USA. This is a classic example for me of a F2 layer opening on 28 MHz. A lone VO station appeared from the 1-hop zone near Newfoundland (~3000kms) and there was a group of stations clustered around the 2-hop zone near Florida (~6000kms).

During the sunspot minimum, F2 propagation via north-south paths on the 10-metre band are always possible. As we climb out of the minimum then we should expect to see more east-west openings on the band.

From my vantage point here in Ireland, the Great-Circle path to Florida is the most southerly of the east-west openings to the USA and it would be the first area I would expect to hear with a F2 layer opening on 10-metres.

The solar-flux on the 20th of November 2020 was around the 80 mark as opposed to say 67 around the time of sunspot minimum. We still have some way to go before we get F2 openings from NW Europe to say Japan or California on 28 MHz but at least we're on the way up.

I'd suspect that the conditions on 28 MHz in 12-months time in November 2021 should be dramatically better than now. Onwards and upwards!