An 18 month absence from the radio hasn't done much for my CW skills. At first, very rusty yet after a few minutes, it starts coming back. I guess it's a bit like learning to ride a bicycle, one you can do it, you never forget.

As well as listening to CW on the various bands, one of the ways to brush up on your CW is to use a contest simulator. 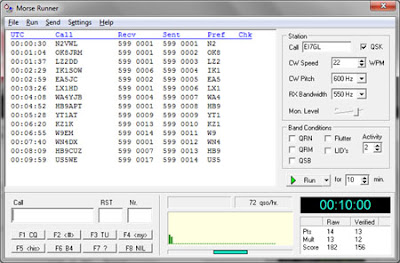 I came across Morserunner a few years back and it's a novel way of listening to morse. It basically simulates operating in a CW contest and you just use the function keys on the PC keyboard to control everything. As it is all off-air, there is no pressure and you can make as many mistakes as you like.
Posted by John, EI7GL at Monday, March 28, 2011 No comments:

After the good conditions on 28 MHz yesterday, I tried listening again the next day on the 24th of March. The band was a lot quieter though. No SE Europe or Middle East.

The band was pretty quiet though. Then I came across WA4FC/B in central Virginia on 28231.1 MHz running 5 watts to a vertical. Other than that beacon, there was no indication that the band was open to North America so I put this spot up on the Dx-Cluster. While the Dx-Cluster gets a fair bit of abuse with lots of rubbish spots, it's invaluable for the likes of 10 metres where a unusual path can open up.

Also heard was ZS6TQ and then VP8LP in the Falkland Islands. The VP8 station seemed nice and loud so out came the microphone from the drawer...plugged it in...and gave him a call......and....no joy :o(
There were just too many stations calling him. So, I just the radio on in the background and about 10 minutes later, his signal seemed to peak and I tried again....and success! :o) My first contact since July 2009. I have worked Falkland Island before on 10 metres but it was still nice to see that my signal was heard way down in the South Atlantic....even if it was only a 5/3 ;o)

Also heard were ZR1ADI (South Africa) and LU5FC....but the level of activity was still well down on yesterday. 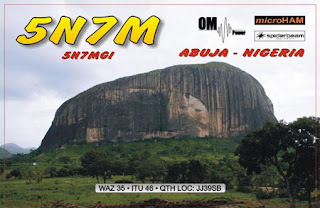 Email ThisBlogThis!Share to TwitterShare to FacebookShare to Pinterest
Labels: 10 metres

Turned on the radio again today after a long absence. Looking at my logbook, my last contact was in July 2009! Back then, the talk was of solar minimums and how poor conditions were. 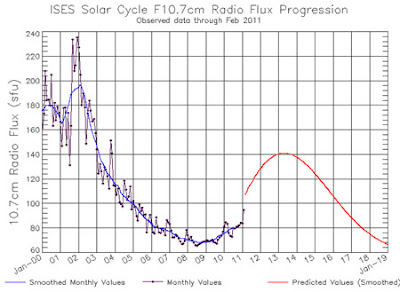 Today, the Solar Flux Index is at 100 and the 28 MHz band was in fine shape. There was plenty of genuine F2 propagation about with signals coming in from SE Europe / Middle East / Africa / South America / SE USA.

Considering I was only listening with an old simple half-wave CB vertical antenna, I was suprised at how strong some of the signals were...especially the beacons running only a few watts.