If you have been following the details of the current solar cycle then you'll know that the peak which is supposed to be coming up in 2013 will be pretty low in comparison to other previous peaks. If true then conditions on bands like 6 metres (50 MHz) won't be great...especially for East-West propagation. 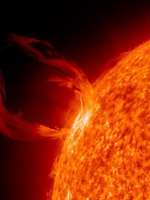 Now it seems as if there are signs that the following cycle won't be great either and the sun might be entering a quieter period.

This appeared in a recent article online.........
"For one, there is an east/west river of gas the flows under the surface of the Sun (it can’t be seen directly, but it generates sound waves that travel from it to the surface, revealing its presence). This river comes and goes, but usually forms at mid-latitudes on the Sun and shifts toward the equator as the cycle progresses. As it does so, sunspots form above it. Although the next cycle won’t start for a few years, the river associated with it should already be forming. However, there are no indications it has, making astronomers think the next cycle may be delayed."

Australia on 28 MHz this morning... 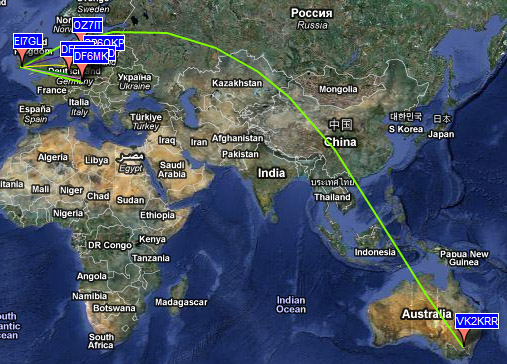 This one was a bit of a suprise! I had WSPR running on 28 MHz this morning and I was hearing some signals via Sporadic-E from Germany and Denmark.

Then I heard VK2KRR 3 times...all in the space of about 10 minutes. A quick check shows the distance to be 17,333 kms. If I worked it out correctly, then I think local sunset there was at roughly 06:58 UTC? So, the signals I heard from VK2KRR were about 10-20 minutes after his sunset.

It's likely that the F2 layer to the NW of VK2KRR became tilted after his sunset and turned his 'high' angle signal into a very low angle one.....hence the enhancement. After that it may have gone through several hops or become a chordal hop signal. I have often seen this before but it's interesting to see it displayed so well on screen. 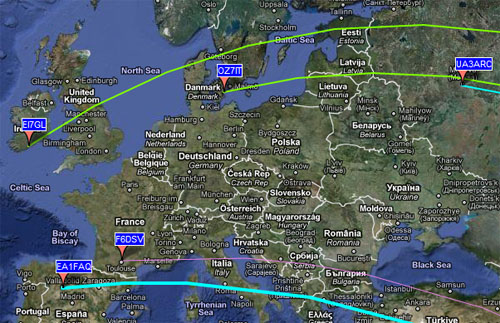 These are the European stations that heard VK2KRR. The last leg of the journey to me was probably via Sporadic-E from central Europe. Notice that I was hearing a station in Denmark earlier and OZ7IT was hearing VK2KRR.

His signal seemed to have hopped over all the stations listening in the UK.
Posted by John, EI7GL at Saturday, June 04, 2011 2 comments:

Friday morning 3rd June 2011.......Just started listening for WSPR signals early in the morning. After a few minutes, the trace looked like this.

The obvious horizontal line is a WSPR signal from a French station via Sporadic-E...........but all the little squiggles?

These are from illegal fishing beacons operating at 28 MHz. Basically, they turn on for about 10 seconds......drifting upwards slowly in frequency and then they give out their ID in morse. In this particular case, it just so happens to be 'AC'.

I have heard this one several times before as I had the rig turned on in the background.....but this was the first time that I actually noticed it appearing on the WSPR trace.