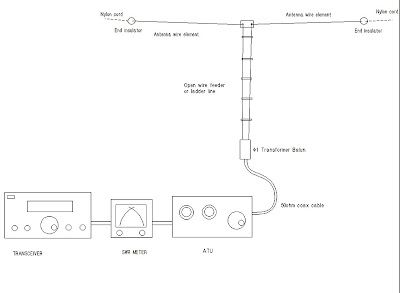 Repaired the HF Doublet antenna today. It had been down for months after getting damaged in the spring gales last March. It's currently only about 3 to 5 metres above ground level but it's better than nothing.

Big opening on the 26th of June to North America and the Caribbean. Needless to say, with a 2 element beam in the attic pointing east, signals were incredibly weak here. 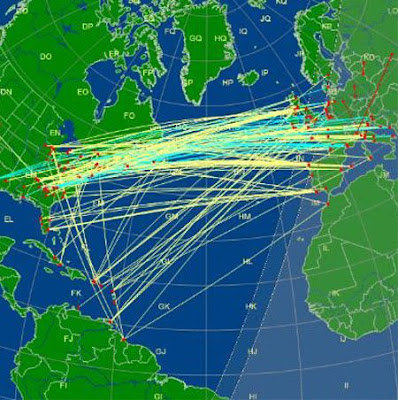 Reading through some recent e-mails, I came accross this...
NASA Releases New Predictions for Solar Cycle 24......An international panel of experts -- led by the National Oceanic andAtmospheric Administration (NOAA) and sponsored by NASA -- has released a new prediction for the next solar cycle: Solar Cycle 24 will peak in May 2013 with a below-average number of sunspots. "If our prediction is correct, Solar Cycle 24 will have a peak sunspot number of 90, the lowest of any cycle since 1928 when Solar Cycle 16 peaked at 78,". This report clarifies a NOAA report from earlier this month that stated that Solar Cycle 24 would bring "90 sunspots per day on average." 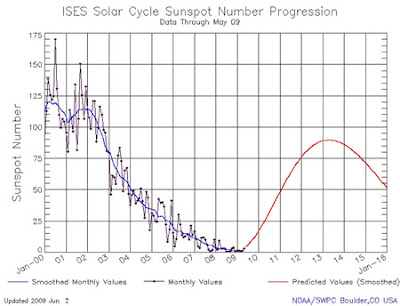 Looking at the date, they are predicting the peak to be between 80 and 100 sunspots per month at the peak. So what does this mean? Let's compare it to previous cycles... 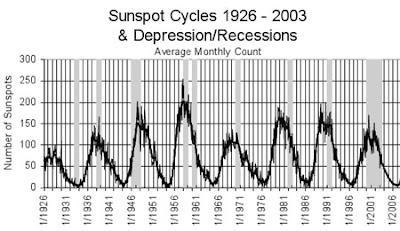 It looks as if it will be similiar but slightly lower than the peak of 1968/9 but worse than the last 3 peaks. What does this mean in practical terms?
In reality, near the sunspot maximum, the HF bands (14 MHz to 28 MHz) will be hopping and there will be worldwide dx regardless of how bad it turns out to be. The big issue is what will propogation on 50 MHz be like?
I remember reading before that the peak of 1968 was supposed to be pretty poor for DX on 6 metres with slim pickings via F2. If it turns out as predicted, I'd expect that there will be plenty of F2 type openings North-South from say Europe to Africa and South America. The big problem is will the MUF get high enough to support East-West type openings from say Europe to North America?....or Europe to the Far East? Stations in Southern Europe will probably work loads (EA/CT/I/etc) but what about those above 50 deg North?
Posted by John, EI7GL at Friday, June 26, 2009 No comments:

Saturday, 20th June........In the evening, I noticed that stations in the UK (G/GW) were working EA/CT on 144 MHz on the Dx-cluster. Having no antenna for the band, I sent Alan EI3EBB a text to notify him and went back to 50 MHz.

Not long afterwards, I noticed that EI stations were now working CT/EA on 2m so I decided to have a listen.... 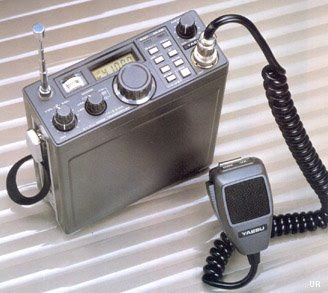 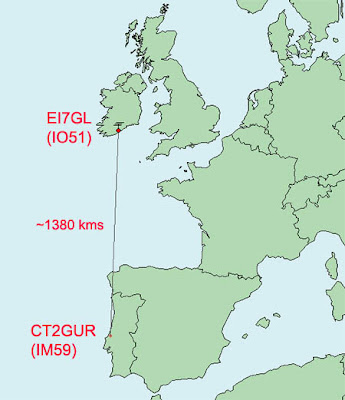 CT2 from EI on 144 MHz using 2.5 watts into a telescopic whip on a rig that was indoors! If I had the rig next to a window with a good view to the south then I'd say it was fair enough. But it wasn't! To the south was a concrete wall about 1 metre away and the view out the window is to the west. Imagine what my signal would have been like with any type of outdoor antenna!


Amazing conditions. It must be one of the strangest contacts that I ever had on 144 MHz.

Postscript.......Message from Paulo....
Hi  John...I've been watching your blog and noticed in our fabulous contact at 144, that since their conditions FT290 2.5W with whip antenna! Spathe! I register it at the time the contact but I never thought that their conditions were such, my setup at the time 2x17el in. H +800 W + LNA

Thank you for the wonderful contact...maybe in a next listen sporadic!

Since I put the 2 element up in the attic, I noticed that sometimes I would hear a series of almost musical tones on 50.057 MHz when the band was open. At first, I thought perhaps it was some commercial /military signal coming from North Africa but over the last few days, it got strong enough to get a positive ID.
Listening from Ireland, there are 2 beacons usually on 50.057 MHz........IQ4AD in JN54 in North Italy which is usually the strongest and IT9X in JM78 near Messina in Italy. From here, IT9X is almost at the maximum possible distance for single hop Sporadic-E. Even when it is almost impossible to read the morse ID, the alternating tones can be heard quite clearly.
Posted by John, EI7GL at Sunday, June 21, 2009 No comments:

The Sporadic-E season is in full swing at the moment with plenty of European signals on the band. I have been using the home brew 2 element yagi in the attic now for about 2 weeks and I'm getting a better idea of what the performance is like.

Signals.........It's certainly not up to the performance of my old 4 element outdoors up at 9 mtrs above ground level but that's to be expected. For such a simple antenna, I'm hearing a lot of signals and it was certainly worthwhile constructing it and fitting it in the attic. In the event that I put up a better outdoor antenna, I think I'll leave the indoor 2 element in place as a back-up.
DX........there were several openings to the west towards the Carribbean. With a fixed beam pointing east, anything from the west was going to get attenuated by about 10 dB anyway so maybe it was no suprise that I heard nothing. I can't say that I'm too bothered anyway because at the moment, my interest in 'chasing' dx on 6 metres is pretty low.
Fri 19th & Sat 20th June 2009..........I was on for both days and there were good openings into Europe. 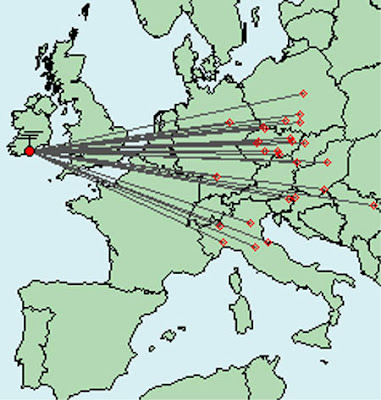 On the 19th, I caught an opening in the early afternoon working 28 stations in 21 squares. Most were pretty normal contacts. The one exception was YU1ACR in KN13 square at 2430 kms which is around the maximum distance possible for one hop Sp-E. 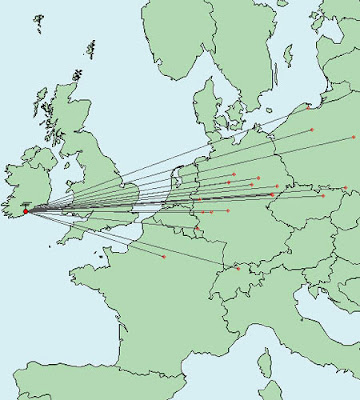 On the 20th, 50 MHz was open more or less all day. I was on air before the contest started and worked 21 stations in 17 squares. Note the footprint of the contacts....oval shaped with the north-south part narrow and the east-west section stretched. This is a typical footprint for a Sporadic-E opening.
Over the 2 days, I operated on cw all of the time. While the qso rate was slower, I was able to work stations that were pretty weak and there were several that I would have not worked if it had been on ssb. When you are using a decent antenna with 50-100 watts, ssb is fine. However, when you have to compromise (i.e. indoor antenna ;o) then cw comes into it's own.
Later in the evening, the band was wide open and full of EU stations working in the contest. It was obvious it was open to the Carribbean as well but as before, nothing was heard here off the back of the beam.
Posted by John, EI7GL at Saturday, June 20, 2009 No comments:

Things have been pretty quiet on the radio front recently....mainly due to a lack of interest on my part as much as anything else.


With the start of the Summer Sporadic-E season in May, I found myself listening more and more on 50 MHz but the aerial left a lot to be desired. A 145 MHz 5/8 wave magmount which acts like a loaded quarter wave on 50 MHz might be fine in an emergency but the performance is awful.


I tried tuning the HF doublet and while it was better than the magmount, it was only fair.


At this stage in the season, I decided to put up something fast in the attic and leave the outdoor work to later. My antenna of choice was a 2 element yagi, much the same as my first antenna on 50 MHz way back in 1991.


My choice was based on the following...
a) A modest bit of gain (~4dbd) with a Front to Back ratio of about 10-12 dB.
b) At the apex of the roof, it would be approx 8 metres above ground level.
c) Wide beamwidth....point it east towards Europe and forget about the west.
d) Feed point impedance close to 50 ohms so it is simple to feed with no complex matching arrangement required.
e) Permanent installation. This for me was probably the main consideration. As an indoor antenna, it is protected from the elements and the coax and elements will never corrode or break.


While an external antenna would be a better choice in terms of lower loss and less noise, at least the attic 2 element will always be there to fall back on if needs be. It got it's first airing on the 11th of June and despite the fact that it is indoors, it seemed to perform fine. Over the space of 3 hours, I worked 54 stations in 45 locator squares. Of particular note were some of the contacts with stations in OH (Finland) at around 2,000 kms. They were probably coming in at a low angle so the 2 element may not be so bad after all.


Putting the contacts into VQLog revealed one contact was a new square for me...JP53. Other interesting contacts were with DF2UU and OH1LEU. According to VQLog, I first worked them back in 1991, a mere 18 years ago!


It seems strange how out of 54 contacts, I should work stations that I had my first contact with around 20 years ago.
Posted by John, EI7GL at Monday, June 15, 2009 No comments: