Just a quick post to say that D41CV in the Cape Verde Islands managed to work G7RAU in the SW of England on FT8 on 144 MHz this morning, Saturday 28th Sept 2019.

The tropo forecast doesn't look great at the northern end of the path but it might be worth checking.

Opening on 144 MHz from the Azores results in several contacts over 3,000kms

On the evening of the 14th and the morning of the 15th of September 2019, there was a very good tropo opening on 144 MHz from the Azore Islands in the Atlantic Ocean to parts of the UK, France, Netherlands, Belgium and Germany. 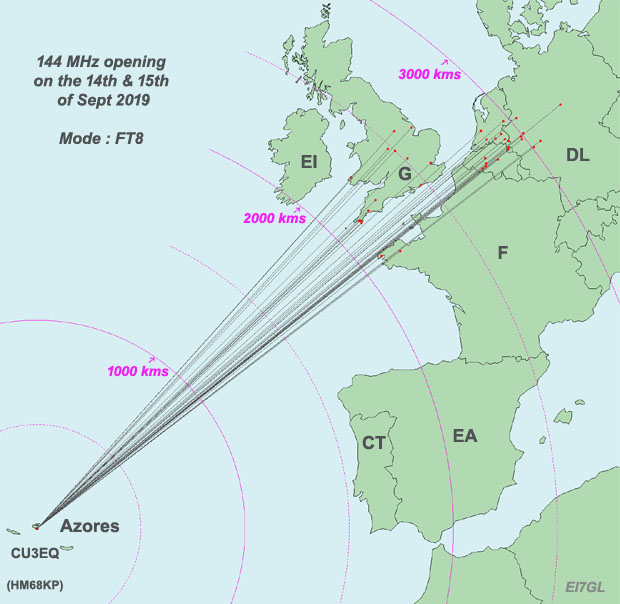 A list of the stations worked by José CU3EQ using the digital FT8 mode is shown below...

This is a more detailed view of the stations worked...

Thanks to Rob, PE9PE who sent on an interesting link recently about a US government report about the low VHF spectrum from 32 to 42 MHz.

After a bit of research, I established that the report titled "NTIA Special Publication 98-36 SPECTRUM REALLOCATION REPORT" was from February 1998. 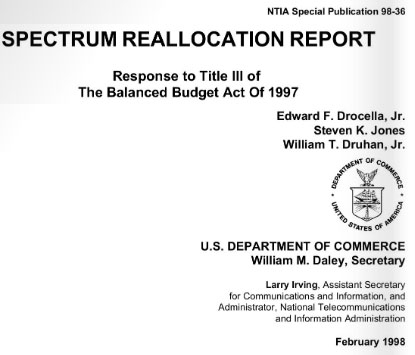 The report looked at who the existing users were in this part of the spectrum and whether some of the frequencies could be reallocated to commercial interests. 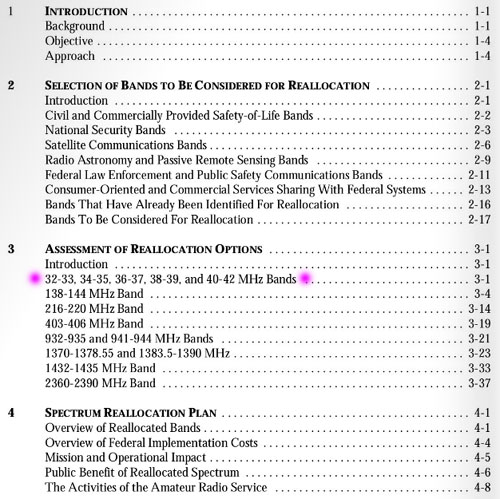 I have included sections of interest from the report below with certain key points highlighted in bold.

It might be worth pointing out that antennas for low band VHF tend to be very large compared to those for the higher VHF and UHF bands. For example, a full size quarter wave ground plane antenna is roughly 2.5 metres on 30 MHz and 2 metres on 40 MHz.

While the report is over 20 years old, it does show that even back then there was little commercial interest in the 30 to 50 MHz spectrum.

*****
SECTION 3 ASSESSMENT OF REALLOCATION OPTIONS
INTRODUCTION In the previous section, the bands to be considered for reallocation for non-Federal use were identified. All of the bands being considered for reallocation are used by the Federal Government agencies, in varying degrees, to support Presidential and Congressionally mandated missions. A band-by-band assessment of these factors is presented and recommendations are made as to which bands will be included in the spectrum reallocation plan.32-33, 34-35, 36-37, 38-39, AND 40-42 MHz

Watch out for VHF path to Cape Verde Is 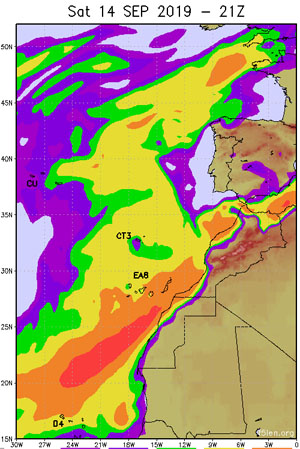 Just a note to say that there is a nice high pressure system over the eastern part of the Atlantic at the moment and there is a possibility of a VHF opening to Cape Verde Islands from the UK and Ireland.

As always, it's a long shot but keep an eye on the tropo prediction website of F5LEN. 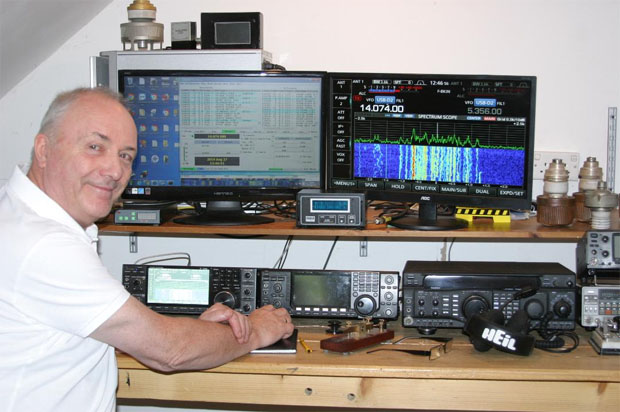 Congrats to Tom EI4DQ who recently achieved an 11 band DXCC!

While a number of EI stations have 10 band DXCC, Tom is the only one to get the magic 100 countries confirmed on eleven bands.

The key difference of course is that EI4DQ has managed to get DXCC on 144 MHz (2 metres) as well primarily by bouncing signals off the moon. 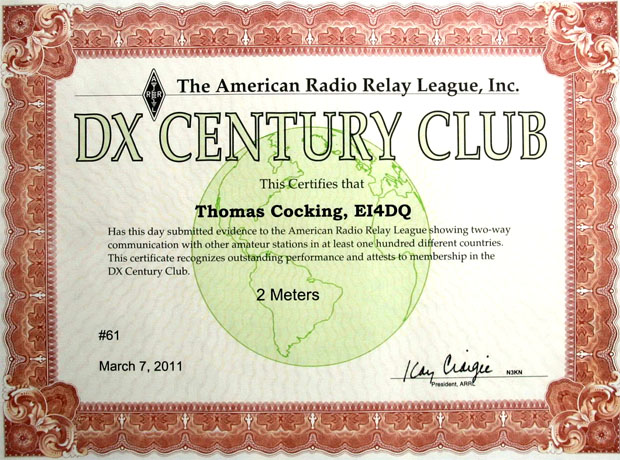 It's probably no exaggeration to say that it's easier to get an 8 band DXCC from 10m-80m than it is to get DXCC on 2m!

I had started my plan of trying to gain the 11 band DXCC goal back in March of 2015, after completing DXCC for the 2 metre and 6 metre bands. I decided it was time to try and get DXCC on the HF bands as well.

My first 160mtr antenna was a single wire inverted L. It worked ok but I had lots of issues feeding it at the base as it had a very low impedance. I always had to use some type of tuner at the base to feed it and make it work.

I then made a folded Marconi L antenna out of 450 ohm open wire feeder, i.e. 4x impedance transformation. Wow what a difference! 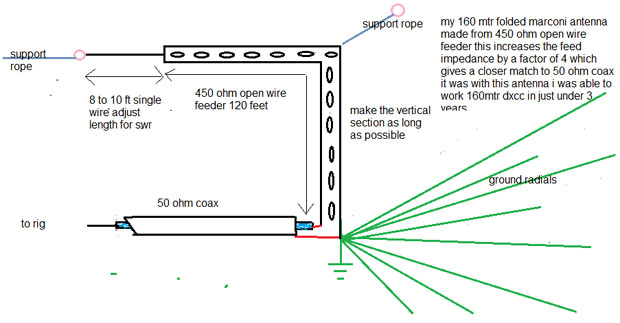 Direct 50 ohm feed, no tuner, 1:1 vswr, and hearing and working DX much better. I also had about 60 radials down of various lengths.

I started to listen to all the 160mtr contests picking off needed DXCC both on cw and ssb and then on FT8. I also started monitoring the Reverse Beacon Network, and the DXsummet DX cluster  for any new DXCC countries that were about. I was about to install a separate receive antenna for 160mts in late 2017, but when I purchased a ICOM IC7610, its noise reducing capabilities and receive were so good that I did not need any receive antenna. I completed DXCC on 160mtr in late February of 2019.

All contacts were confirmed via Logbook of the World (LOTW). I could have used some of my QSL cards from previous activity in the 1970's to 1990's period when I was very active on the HF bands but chose not to do so. I also tended to only pick out stations who were in the LOTW program.

The last band 12mtr (24 MHz) was completed in August of 2019. This band was the most frustrating band to work DX! It was a pain to hear DX on 15mtr and 10mtr and sweet nothing on 12mtr. It took me 2 months just to dig out the last needed DCXX to make 100 on this band. My final total on this band was 112 DXCC but only 100 of them uploaded to LOTW.

So at last on the 21st of August 2019, the 11 band DXCC was completed. All together it took me just over 4 years to complete the needed HF DXCC. 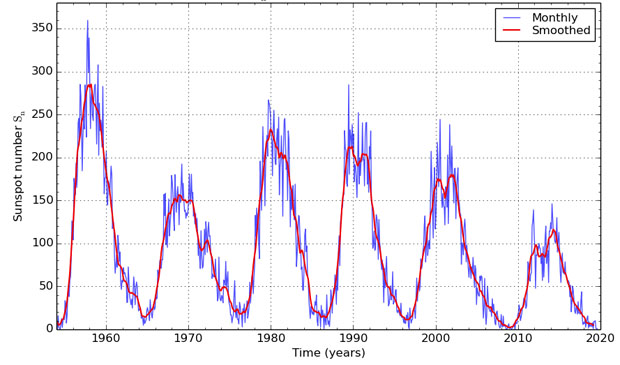 I recently across this news item based on a scientific paper which was released in May of 2019. Despite the huge differences in size, the study suggests that the planetary alignment of the planets Venus, Earth and Jupiter is large enough to effect the sun and its sunspot cycle.

"As with the gravitational pull of the Moon causing tides on Earth, planets are able to displace the hot plasma on the sun’s surface. Tidal forces are strongest when there is maximum Venus-Earth-Jupiter alignment; a constellation that occurs every 11.07 years."

The lead author of the study, Frank Stefani is quoted as saying...“There is an astonishingly high level of concordance: what we see is complete parallelism with the planets over the course of 90 cycles.”

If it is true then perhaps it might allow for better computer models to be built to predict future sunspot cycles?

Not only is the solar cycle of interest for radio propagation but it is hugely relevant to the large number of satellites in orbit in terms of drag and radiation.

More info on the study in the links below... 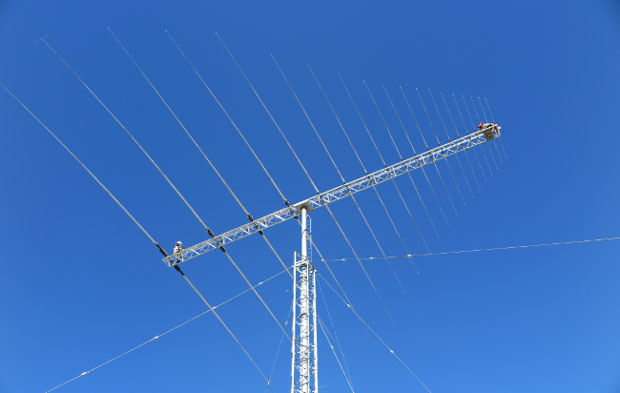 I came across this website recently which I think some readers might find of interest. It's a story of one persons antenna project in the USA which cost $14,000 and its eventual failure.