In April of 2018, Comreg...the Irish regulatory authority allowed Irish radio amateurs access to the 30 MHz to 49 MHz part of the VHF spectrum on a secondary basis. As one European administration has now allowed radio amateurs to experiment with this part of the spectrum, it is possible that others may follow.

The 60 MHz or 5 metre band has the potential to be a future allocation for the Amateur Radio service. The International Amateur Radi Union (IARU) are currently encouraging member societies to try and obtain small allocations at 40 MHz and 60 MHz.

The purpose of this page on the blog is to put any information that I have about the subject in one spot so that others can find it. 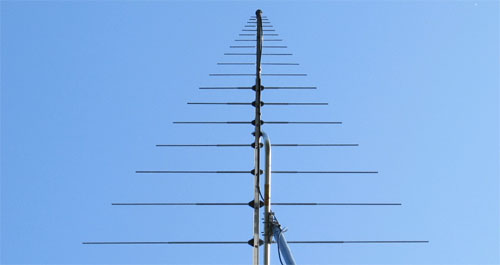 Following World War II, radio amateurs in the USA had access to the 5-metre band for a brief period but came to an end on the 1st of March 1946 when they allocated the 6-metre band of 50-54 MHz instead.

At the 1947 International Radio Conference in New Jersey, broadcasting was allocated 41 to 68 MHz in Region 1 (Europe/Africa).

For decades, this part of the spectrum was used for broadcasting television signals worldwide. Towards the end of the 20th century, many of the TV transmitters were moved up into the UHF part of the spectrum. With the advent of digital television, this has accelerated. This has the result that in many parts of the world, there aren't as many TV signals in the 60 MHz region as there once was.

In April of 2018, Ireland (EI) allocated much of the low VHF spectrum to Irish radio amateurs including 60 MHz.

In late 2019, LY2YR in Lithuania was given permission to operate at a spot frequency near 60 MHz.

IARU recommends beacons at 60 MHz...
IARU - International Amateur Radio Union.
IARU-R1 VHF Handbook - Version 8.01 November 2017
IARU-R1 RECOMMENDATIONS FOR VHF MANAGERS
Multi-Band beacon clusters (Cavtat 2008)
• National Societies should encourage the deployment of multi-band beacon clusters covering low
VHF between about 30 MHz and about 70 MHz.
• Deployed beacon clusters should wherever possible provide signals at around 40 MHz and
around 60 MHz.
• Amateurs should be encouraged to set up and maintain automated monitoring stations and to
contribute the measurement results to the community.
• A common transmission format should be adopted to aid the reception of multiple clusters
https://www.iaru-r1.org/index.php/downloads


Resources...
1) Clive Davies, G4FVP writes a column called VHF Low Down in the journal for the UK Six Metre Group. This often has items of interest for anyone interested in what is going on in the low part of the VHF spectrum outside of 50 MHz. Annual membership required. http://www.uksmg.org/