The PSK Reporter website is used by nearly everyone on digital modes to see what is being heard by stations active on the HF and VHF bands.

Thanks to the efforts of Tim EI4GNB, the new 40 MHz (8-metres) and 60 MHz (5-metres) bands have been added to this hugely popular platform. 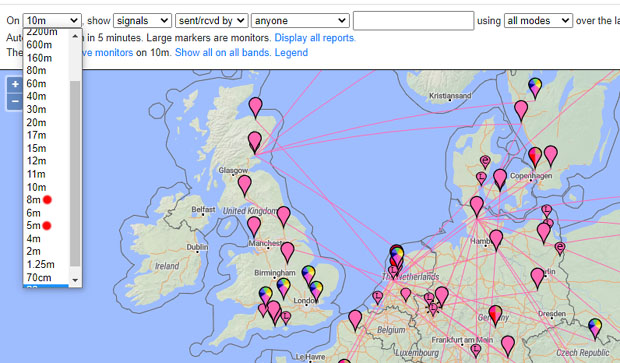 Tim writes...."After some emailing with Philip Gladstone, the coder behind the 'reverse beacon' system known as PSK REPORTER, it now officially supports 5m and 8m reporting and mapping, based on reports from [digital mode software] operating within the bandplan guidelines published on the IRTS website drafted by Dave Court."

"This will mean anyone operating FT8/FT4/Digimode etc., or logging PI4 beacons, using supporting software with the 'psk reporter' option enabled, will now be correctly placed on the PSK Reporter map.

It's safe to say that the majority of radio amateurs in the world are still are not aware of the 8-metre and 5-metre bands. Even though this is just a small step, it will hopefully raise the profile of these two new VHF bands.

Update: Example below of a FT8 contact between S50B and S59F on the 12th of August.