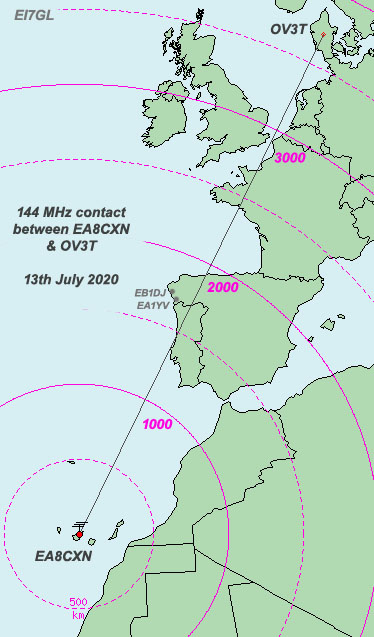 Long distance contacts on 144 MHz that are in the region of 3000kms are always of interest as that is the distance across the North Atlantic between Ireland and Newfoundland. In this series of blog posts, I will look back at some of the 3000km plus contacts on 144 MHz during the Summer of 2020 that I haven't reported on yet. 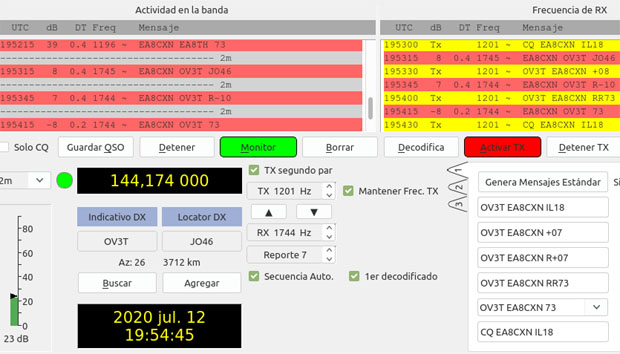 OV3T in Denmark was using 400 watts into a 10-element Yagi for the contact. I'm not sure what EA8CXN was using.
EA8CXN gave OV3T a report of +8dB while OV3T gave EA8CXN a report of -10dB. This probably meant that CW or FT8 were the only viable modes for making a contact.
Mode of Propagation... The distance was in the region of 3710 kms which is well in excess of the usual 2300km limit for one hop Sporadic-E. So what is the likely explanation?
First off, we can look at the Hepburn prediction map for tropo for the day...

While OV3T was working EA8CXN at 19:55 UTC, another Danish station OZ1CCM worked EA1YV at about the same time which suggests a short Sporadic-E opening from Denmark to NW Spain & N Portugal.

While we can never be 100% sure of what exactly happened, this is the likely scenario....

There was an marine duct from the Canary Islands to the west coast of Spain and Portugal for most of the day. This maritime duct probably didn't get more than 100kms inland and probably didn't cross over the mountains on the Iberian peninsula.

At about 19:50 UTC, there was a short Sporadic-E opening from Denmark to NW Spain & N Portugal. The Sporadic-E signals from Denmark got coupled into the marine duct and on to the Canary Islands.

The tropo part of the path probably accounted for 1500kms of the total while the remaining 2200kms was Sporadic-E.

In conclusion... This contact yet again shows the value of the FT8 digital mode in exposing propagation paths that we didn't know were possible.

The opening from Denmark to the Canary Islands also raises the possibility of a further extension further south to the Cape Verde Islands. The maritime duct off the west coast of Africa often extends from Cape Verde to Spain and Portugal and if that coincided with a similar Sporadic-E opening again then perhaps contacts in the region of 5,200kms might be possible.