On the 17th of July 2020, there was an opening between the Canary Islands and the UK & Ireland on the VHF & UHF bands. A remarkable contact was made on 1296 MHz between EA8CXN and EI2FG which turned out to be a new IARU Region-1 tropo record for the 23cms microwave band. 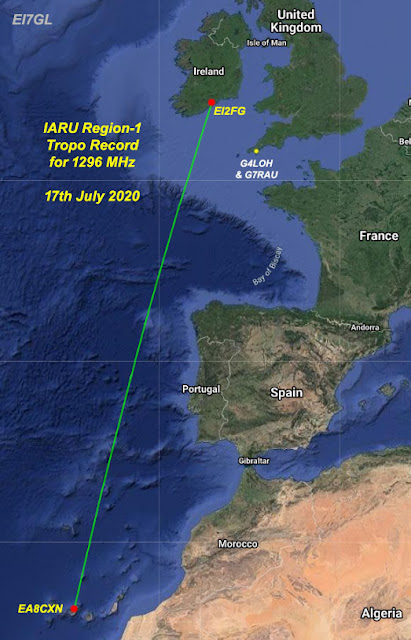 In a report on his website, Cesar EA8CXN reports that there was a good tropo opening on July 17, 2020,  between Ireland-England and the Canary Islands.
In the evening, EA8CXN completed contacts with G7RAU, G4LOH and EI20C (op. Mark, EI3KD) on 432 MHz. EI20C mentions that John, EI2FG is also active on 1296 MHz so tests begin.
G7RAU is the first to complete a successful contact on SSB on 1296.200 MHz using just 5 watts into a 56 element Yagi. G4LOH also completed a contact.
After a period of deep QSB, a successful SSB contact was completed with EI2FG on 23 cms with 5/1 and 5/4 reports exchanged. The distance was an amazing 2714 kms.
Not only was this the first ever contact between Ireland and Canary Islands on 1296 MHz but it was also a new IARU Region-1 tropo record for 23 cms. 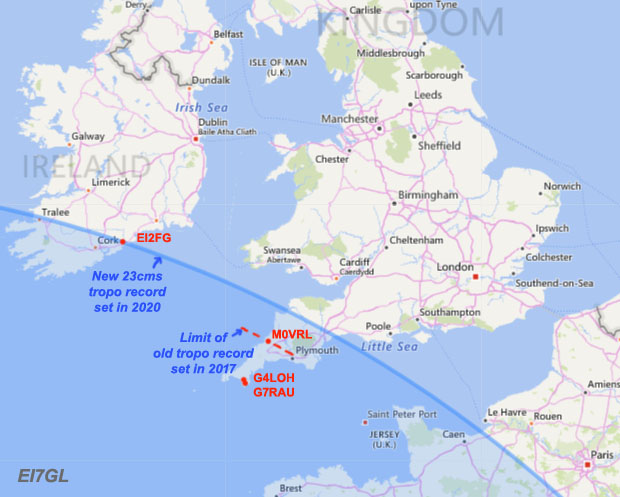 The map above shows the limit of the new record. The old record of 2661 kms was set on the 14th of July 2017 between EA8AVI and M0VRL.
The map also suggests that there is plenty of scope for the record to be broken with sea paths further north to the west of Wales and up the Irish Sea.
Equipment... For the record SSB contact on 23 cms, EA8CXN was using 150 watts into a small parabolic dish which was 50 cms in diameter. The feed point for the dish was a 3-element horizontally polarized PCB Yagi. 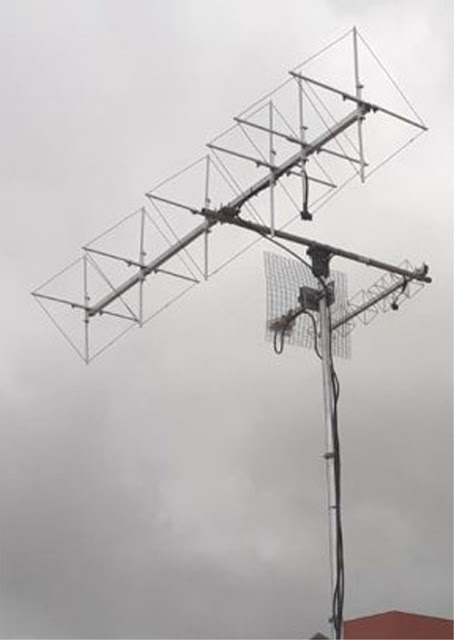 EI2FG was using his EME station of 200 watts into a 3-metre parabolic dish. The feed point was Right-Hand Circular Polarization on transmit and Left-Hand CP on receive. 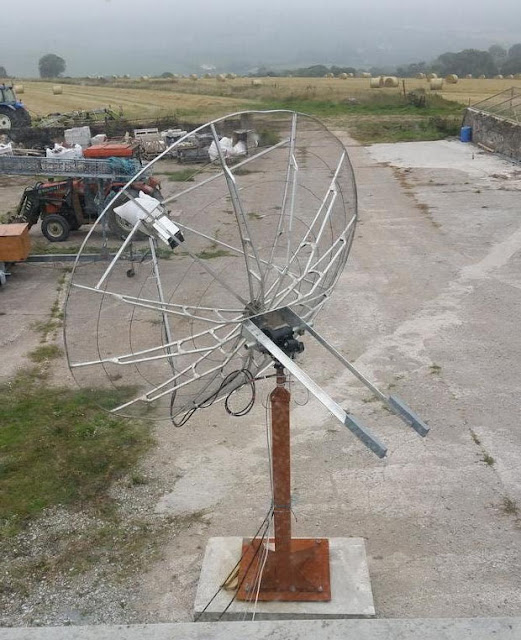 Propagation... The mode of propagation was via a maritime duct over the ocean. 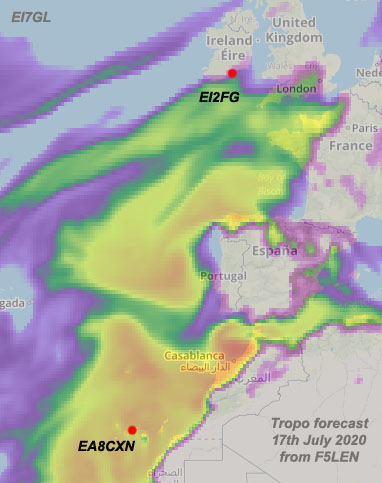 This duct exists for long periods of the year between the Canary Islands and the western coast of Spain & Portugal and then gets extended sometimes further north to the UK and Ireland.
In conclusion.... To put this this record 2714 km contact on 1296 MHz, a microwave band into perspective, it's worth remembering that the distance across the North Atlantic from Ireland to Newfoundland is around 3000kms.
It's also likely that the record distance could be exceeded further north to Wales or up the Irish Sea as outlined earlier. The biggest obstacle at the moment is probably the lack of stations on 23 cms.
If the D4VHF station on Cape Verde Islands off the coast of Africa ever became operational on 1296 MHz, the record could well be extended to about 4000 kms.
Links...
1) EA8CXN post in Spanish
Posted by John, EI7GL at Thursday, August 06, 2020

Excellent write up john, great achievement, reaching D4VHF would be quite a challenge and who know..