This clip has been doing the rounds on YouTube recently.

Not for the faint of heart ;o) 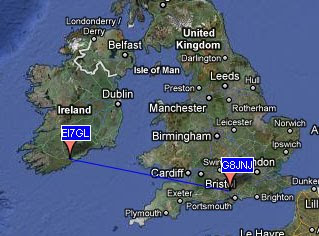 An unusual spot this morning.......I heard G8JNJ on WSPR on 28 MHz.
At the time, there doesn't seem to be any other reports.
G8JNJ was running 10 watts and the distance was 495 kms.
Mode of propogation....?
Tropo......10 watts over 500 kms! Very unlikely. Tropo propagation on 10 metres is very poor.
Sporadic-E......guess it's possible, you can't really rule it out.
Meteor Scatter.......my guess is that it was probably meteor scatter. Even though you need a transmission 2 minutes long for WSPR, I have often heard very long bursts on 10 metre beacons. Even checking the trace a few hours later, I can see traces of some signal on exactly the frequency that G8JNJ is supposed to be on.
Posted by John, EI7GL at Friday, April 09, 2010 No comments: 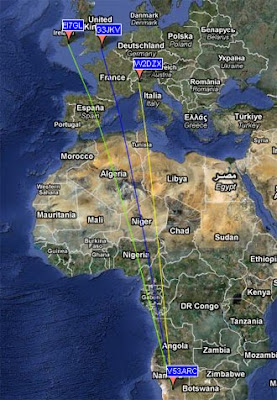 Back messing about with the radio again. Tried out listening with WSPR on 30m & 60m over the last few days. It's so easy.......just run the software, put the mic from the pc next to the loudspeaker of the HF rig and away you go.
Spotted a few German stations this morning so there was some Sp-E about. Start of the Sporadic-E season!
Around 14:00, I heard V53ARC in Namibia which was a big suprise! So much for a dead band!
I would say the most likely reason was a single F2 hop from V53 to southern Europe and then via a single Sporadic-E hop from there to the UK and Ireland.
WSPR spots below for V53ARC
Posted by John, EI7GL at Thursday, April 08, 2010 No comments: