Sorting out those QSL cards...

Things have been pretty quiet here on the radio front. The spring gales took their toll and my HF doublet is down at present although it won't take much to get it going again. Otherwise, I have been sorting out my QSL cards. I tried before to sort them out by band but it was just way too awkward. So, I have sorted them out now by country and they're all now neatly filed away. Once thing that became apparent however is the number of German QSL cards. Germany has a large amateur radio population and the distance from Ireland to Germany is almost optimum for Sporadic-E contacts on 10m, 6m and 2m....hence the large number of cards. 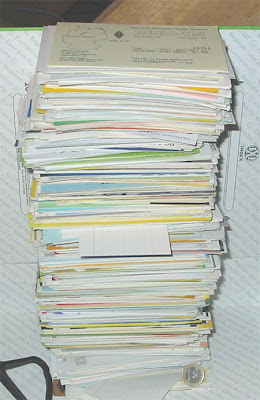 I'm not exactly sure how many are in there but there is a 1 Euro coin at the bottom for scale.
I think it's safe to say that I have Germany confirmed by QSL at this stage ;o)
Posted by John, EI7GL at Sunday, May 31, 2009 No comments: