This item appeared on the IRTS news last Sunday...

Will this be the year? The 2m WA1ZMS trans-Atlantic beacon The WA1ZMS beacon on 144.285000 MHz is now running a 500 watt transmitter giving 7 kW ERP The beacon is GPS locked and the antenna comprises two 5-element stacked yagis beaming at 60 degrees from IARU locator FM07fm.
I'm sure most people accepted it at face value and assummed that it was a beacon on the Eastern side of the Atlantic beaming accross (60 deg) on 144 MHz to Europe.
However, when you look at the location of it, some serious issues arise... 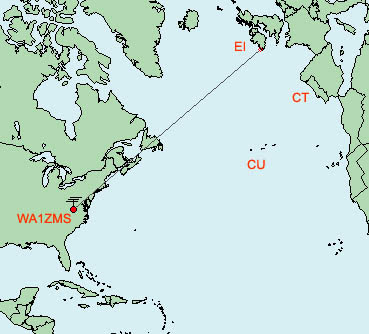 The distance between the nearest point in Europe (Ireland) and the nearest point in North America (Newfoundland) is generally considered to be around 3,000 kms. The WA1ZMS beacon is in locator square FM07fm which is in the state of Virginia, some 5,480 kms from Ireland. In fact, it's so far away that it's one Sporadic-E hop from Newfoundland alone. To put that into a European context, it's the same as putting a trans-Atlantic beacon in Romania (YO) and asking someone in Newfoundland to listen for it!
Now, I'm sure that it's an excellent beacon and it is very valuable fas a propogation indicator along the Eastern seaboard of the United States and Canada. And I guess, there is always the possibility that it might bridge the gap accross to the Azores (72 deg...12 deg off beam heading of 60 deg)....especially when the Azore High Pressure system moves around when it expands in the Summer/Autumn month. Even at that though, the distance is still about 4,500 kms.
To suggest that it might make it all of the way accross to Europe proper would take a big leap of faith.
Posted by John, EI7GL at Wednesday, August 05, 2009 3 comments: 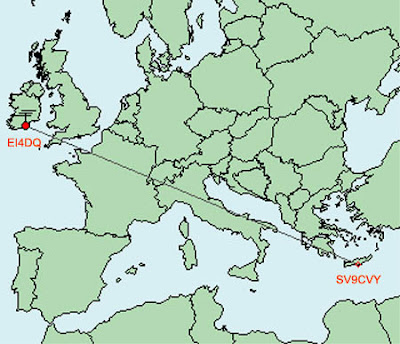 This is something I meant to post a while back but never got around to it unil now.
Back on the 3rd of July, there was some excellent Sporadic-E propogation over Europe with some very impressive distances. One of those contacts was between Tom, EI4DQ (IO51wu) and SV9CVY (KM25ka) on the island of Crete, a distance of about 3,213 kms. Anyone that knows about Sporadic-E will know that the usual maximum distance for 1 hop is around 2,300 kms so the above distance is unusual. (On the map above, 2300 kms would be roughly from EI4DQ to roughly the heel of Italy).

Now, there are probably 3 possible explanations for this type of contact...
1) Double hop Sporadic-E as shown above...using clouds #2 and #3
2) Chordal hop where the Sporadic-E clouds may be slightly tilted and the signal goes from cloud to cloud rather than bouncing off the ground in the middle.......i.e. the signal goes directly from cloud #2 to cloud #3.
3) There was an extension at either end or both ends due to tropospheric propogation.
Considering that the MUF does not reach as high as 144 MHz that often, it's remarkable that it should happen in 2 spots at once. Hence, that's why these type of contacts are pretty rare.
Now for a bit of fun ;o)......what happens if we take that 3,213 km contact and plot it from EI4DQ's location in the opposite direction... 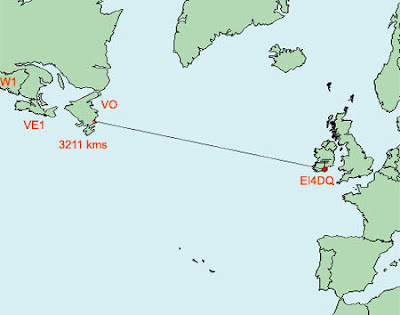 In fact, if EI4DQ managed to get a signal to travel that far to the west, it would end up in Newfoundland! To date, no-one has managed to make a contact accross the Atlantic on 144 MHz and it remains the 'holy grail' of VHF propogation. In fact, the IRTS have a special trophy called the Brendan Trophies for the first 2 stations to achieve this special contact.

Now, there's a big difference between the path from EI to SV9 compared to the path from EI to VO (Newfoundland). For one thing, EI to VO is a lot further North and Newfoundland is a lot closer to the magnetic North pole, all factors which seem to reduce the chances of there being suitable Sporadic-E.
It does however raise the question of whether it is possible? Europe to North America direct on 144 MHz.......can it be done???
Posted by John, EI7GL at Sunday, August 02, 2009 No comments:

I have been listening on the low power weak signal mode WSPR for about 3 weeks now. For a lot of that time, I have left the receiver on overnight on 30 metres to see what signals I could hear. 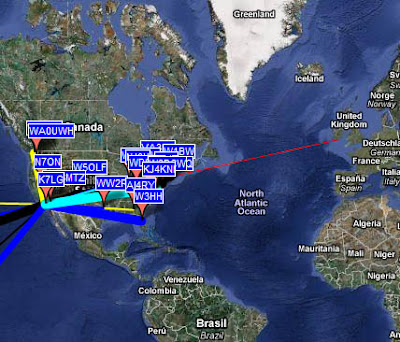 A typical morning might show plenty of signals logged from Europe and the East coast of the USA. But there's nearly always one or two signals from the West coast that I have heard and more often than not, I am the only one or one of a few in Europe to have heard their signal. An typical example looks like the one above from K7LG in southern California. As you can see, I am the only European station that heard him that night/morning. 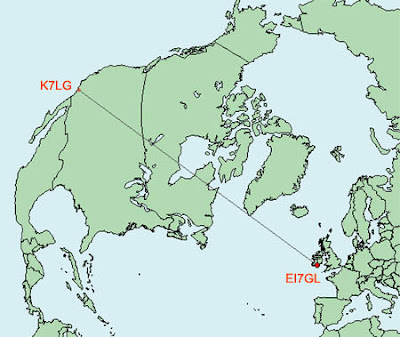 Looking at the great circle path, it becomes obvious that Ireland and Britain are closer than most of the mainland Europe for propogation to the west coast of the USA. As well as 30m, I have seen the same results on 40m and I presume it is the same for 20m.

So, if you are an EI/GI/GM station and are on the air after midnight or in the early hours of the morning, have a listen for those west coast stations.
Posted by John, EI7GL at Saturday, August 01, 2009 No comments: