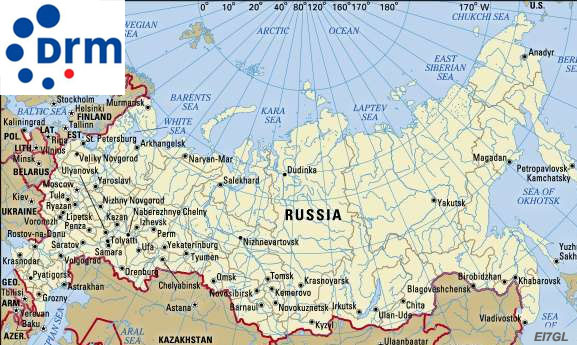 On the 11th of September 2018, it was reported that the Russian Federation proposes to use the digital DRM+ standard for broadcasting on the  the radio frequency bands 65.9-74 MHz and 87.5-108 MHz.

While this move may not have much of an issue here in Ireland, it has the potential of being a major source of interference to radio amateurs using the 4 metre band (70 MHz) in central and eastern Europe. As 'Secondary Users' of this part of the spectrum, radio amateurs have no choice but to live with any interference, especially during the Summer Sporadic-E season.

The 65.9 MHz to 74 MHz spectrum has been used up to now for analogue FM transmissions in Russia and some adjacent countries. Over the last 20 years, the general trend has been to close these low band VHF transmitters and move them instead to the usual 88 to 108 MHz band. It seemed as if the 65.9 to 74 MHz band might eventually close but this new digital DRM allocation will see it being put to a new use.

This highlights the fact that while extensive parts of the low band VHF spectrum were allocated to the Amateur Radio Service in Ireland, that is very unlikely to happen elsewhere in Europe.

MOSCOW, September 11 (Itar-Tass) - RIA Novosti. New digital broadcasting standards are being introduced in the Russian Federation, the radio frequency bands 65.9-74 MHz and 87.5-108 MHz will be allocated for use by digital radio broadcasting means of digital terrestrial broadcasting of the DRM + standard, this will have a significant impact on the development of the broadcasting market in the country, service of the Federal Agency for Press and Mass Communications.

"On September 11, 2018, the Ministry of Digital Development, Communications and Mass Communications of the Russian Federation held a regular meeting of the State Commission on Radio Frequencies, which supported the decision to allocate the radio frequency band 65.9-74 MHz, 87.5-108 MHz for the creation on the territory of Russia networks of digital broadcasting of the standard DRM +, "- said in a statement received by RIA Novosti.

It is noted that the implementation of the DRM + standard significantly increases the efficiency of the use of radio frequency resources. In the frequency band of the DRM + 100 kHz radio channel, up to four stereophonic programs can be transmitted, including additional information. Compared with FM broadcasting, the quality of the perception of sound programs improves due to the possibility of switching to multi-channel stereo.

The standard allows you to enter additional data services, including text, statistical images, the Traffic Message Channel (TMC), and also provides the ability to use the Emergency Warning Function (EWF). With DRM +, the number of radio channels is almost doubled, and the operating costs and payback periods of new equipment are reduced by reducing the required transmitter power and the available capability of their operation in a single-frequency network, which leads to additional energy savings. The introduction of the new standard does not require changing the frequency planning adopted in the Russian Federation and allows integration into the global information system without additional costs.

"This is an uneasy but fundamental decision that will have a significant impact on the development of the broadcasting market in our country." In Europe, the digital broadcasting standard has been actively implemented for a long time. "Norway, Switzerland, Austria, Germany, Italy, Denmark, Belgium and Latvia several years ago began a stage-by-stage refusal of analogue broadcasting in favor of digital, "said Mikhail Seslavinsky, head of the Federal Agency for Press and Mass Communications, after the meeting, his words are quoted by the press service of Rospechat.

It is noted that before recommending a standard for use in Russia, FSUE RTRS jointly with the St. Petersburg State University of Telecommunications. prof. M.A. Bonch-Bruevich conducted research work, during which the claimed in the standard characteristics of the DRM + system were confirmed, field tests were conducted in the modes of fixed mobile reception of the DRM + signal in the radio frequency bands 65.9-74 MHz, 87.5-108 MHz, service areas were estimated with the transmitter power selected, laboratory studies of the required radio frequency protection ratios at the receiver input were made.