Back in early 2018, the 60 MHz (5-metre) band was allocated to radio amateurs in Ireland (EI) on a secondary non-interference basis. A new 5-metre beacon with the call EI1KNH became operational on the 16th of December 2019. See previous post.

It is on 60.013 MHz and runs 25 watts into a vertical folded dipole. This is currently the only 5-metre beacon operational in the world.

The new 5-metre beacon is co-sited with some of the existing Irish beacons - EI0SIX on 50 MHz, EI4RF on 70 MHz. The elevated site has a locator of IO63VE and is located about 20 kms to the south of Dublin. 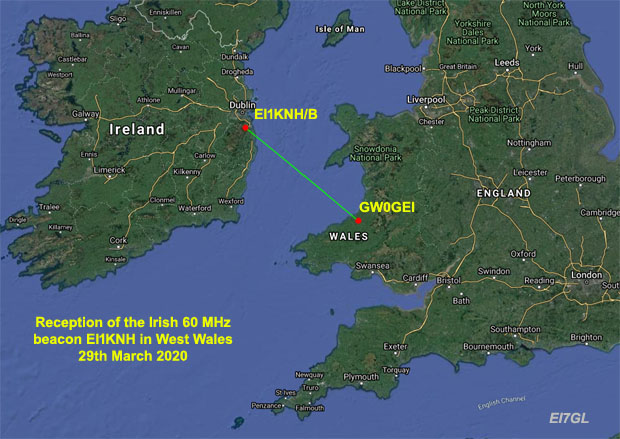 On Sunday the 29th of March 2020, Steve GW0GEI in West Wales reported reception of the EI1KNH beacon on the DX Cluster, a distance of about 175 kms.

While there isn't anything particularly remarkable about this reception, it does seem to be longest reception report to date on the cluster.

It's also an excuse for me to remind people about this beacon on 60 MHz as we head into the Sporadic-E season. A lot of people will have SDR receivers that cover that portion of the spectrum and might well be able to hear it.

More info about the EI1KNH beacon in this previous post.

If you do hear the beacon then make sure to report it on dx-clusters like DXSummit or DXMaps as some of the other clusters ignore spots for 60 MHz as they assume they're a mistake.
Posted by John, EI7GL at Wednesday, April 15, 2020