The Irish Radio Transmitters Society announced today in their weekly news that Irish radio amateurs are to gain access to a huge part of the low band VHF spectrum. 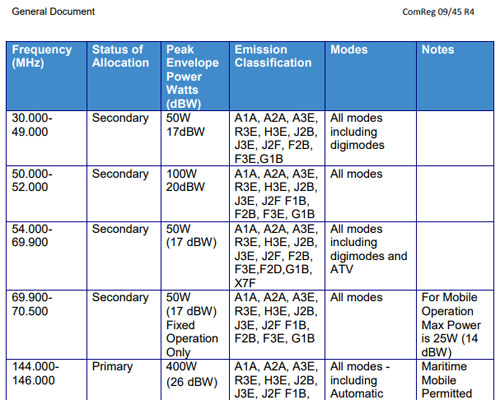 Over the years, it's usual for the IRTS to lobby the licensing authority to get access to a small band here and there but not on this scale. I'm still assuming it isn't a mistake as the information on the Comreg website has been verified in the IRTS news. It may well be possible that it may in time become more defined as two distinct bands in the 40 MHz and 60 MHz region but for now, you can see the allocation as per the Comreg website shown above.

IRTS News...
Additional Frequencies
In December 2015 ComReg published a Draft Radio spectrum Management Strategy 2016-2018. The Society responded with a comprehensive submission to this draft and a summary of this was published in the March 2016 edition of Echo Ireland.

In June 2016 ComReg published its final Radio Spectrum Management Strategy 2016-2018 and indicated its intention to grant some additional spectrum to the amateur service. This has now been done and is in line with some of the requests made in the Society’s submission.

The 70 MHz band has been extended to 69.9 MHz to 70.5 MHz. This is an increase of 275kHz over the existing band of 70.125 to 70.450 MHz and is the full band that may be allocated to the amateur service under the European Common Allocations table.

Further spectrum covering all modes including digimodes has been granted on a secondary basis at 30 to 49 MHz and 54 to 69.9 MHz. The latter band also includes digital television in addition to all other modes. These new frequency bands are listed among the bands available generally to radio amateurs in Annex 1 of a recently revised version of the Amateur Station Licence Guidelines document ComReg 09/45 R4 which is available on the ComReg website.

The new bands in the 40 MHz and 60 MHz regions will, among other things, facilitate modern type beacons in the region of these frequencies as well as moving the existing 70MHz beacon on 70.130 MHz to the section of the band designated for beacons.

IRTS will be producing a local band plans for these two bands in consultation with countries that have allocations at these frequencies and IARU.

The Society would like to express its appreciation to ComReg for the release of this extensive spectrum to the amateur service on a secondary basis.

Subsequent news item from the Royal Society of Great Britain (RSGB)..."In a landmark step, the Irish regulator Comreg has agreed to amateur access, on a secondary basis, to an extensive amount of VHF spectrum including 30-49MHz and 54-69.9MHz. In addition, their existing 4m band has been widened to the full 69.9-70.5 MHz CEPT range. It is expected that this will facilitate a number of innovative developments, including digital amateur television and new or realigned VHF propagation beacons. The RSGB congratulates its IRTS colleagues on their success, which dates back to a 2016 consultation input."
Posted by John, EI7GL at Sunday, April 29, 2018

Sounds good to me John.

I suspect that the RSGB will be looking for similar low-VHF extensions in the UK, it is notable that no geographic restrictions appear to exist on the use of any of the 'huge swathes of the VHF spectrum' near the Northern Ireland border (or east coast of Ireland either).

Having no restrictions near another border seemed a bit strange alright. It's almost as if 17dBw / 50 watts is considered too low to be of any consequence. The reality on the ground though is that the numbers using this part of the spectrum are likely to be very low and those that do will likely have the savvy to use frequencies that will avoid any problems. It's not like the band will be flooded with people using Chinese handhelds.