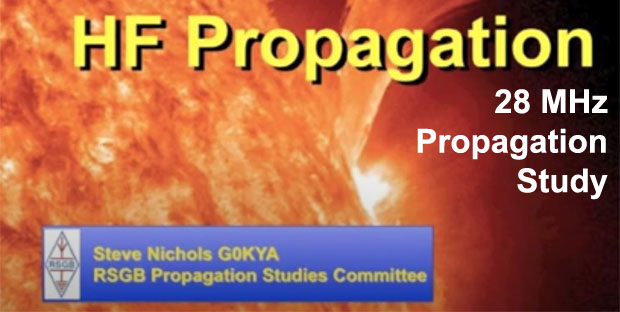 In this months RADCOM magazine from the Radio Society of Great Britain (RSGB), there was an interesting news article about a new propagation study on the 10-metre amateur radio band.

The RSGB Propagation Studies Committee are interested in looking at the modes of propagation responsible for signals in the 150km to 800km range. 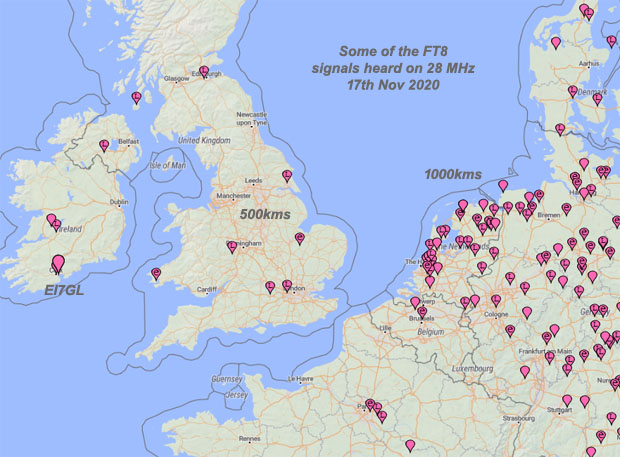 The signals from the Netherlands, Germany and Denmark (1000 kms plus) are easily explained as they were via Sporadic-E propagation. As the skip distance gets shorter however, it gets harder for the signal to return from the Sporadic-E layer.

Tropospheric propagation also happens at 28 MHz but it's a lot weaker than on the higher VHF bands. On the map above, the two stations about 100kms to the north of me and the station on the west coast of Wales who was about 200kms distant are probably via tropo.

The question then arises as to what is the propagation mode for the signals from England and Scotland in the 400km to 700km range? On the day, it seemed to be too close for Sporadic-E and too far for tropo.

This wasn't unique to just this particular day. It happens pretty much most of the time. Over the Summer months for example, I seem to hear G0OYQ near Hull (579 kms) on FT8 on 28 MHz practically every day.

Are these signals due to meteor scatter? Sp-E backscatter? Aircraft scatter? Tropo? The RSGB study hopes to address this.

The news article from RadCom is shown below...

RSGB's Propagation Studies Committee (PSC) has launched a new study to look at the mechanism behind long-distance inter-UK 10m propagation.

The study came about after PSC chairman Steve Nichols, G0KYA noticed that he was often seeing inter-UK 10m contacts on FT8 occurring between stations that were more than 100 miles apart.

"Normally you would expect 10 metres to give contacts out to about 30-50 miles at best," Steve said, "But these contacts, which are often fleeting, were over distances of about 150 miles. I also that they often appeared in the early mornings, but disappeared as the day progressed. We've had to wait for the Sporadic-E season to end to exclude Es as a possible propagation mode."

Steve said that the likely propagation mode was tropospheric, although aircraft scatter or ionospheric scattering can't be ruled out. Either way, it warrants closer examination.

To take part in the study, just log any UK stations heard via FT8 on 10 metres in excess of 100 miles, making a note of date, time, received SNR and the location of both you and the distant station. Please also include details of your antenna and any beam heading if applicable. Steve can then compare this with weather patterns and barometric information at the time.

PSKReporter.info and DXMaps.com can also be used to track contacts online. "We'd like to encourage new amateurs to take part as the reporting isn't too onerous, but the information you supply could be invaluable," Steve said. Steve can be contacted via email to psc DOT chairman AT rsgb DOT org DOT uk