After reading reports of recent activity on 28 MHz, I started listening again on FT8 on the 10-metre band to see what conditions were like. 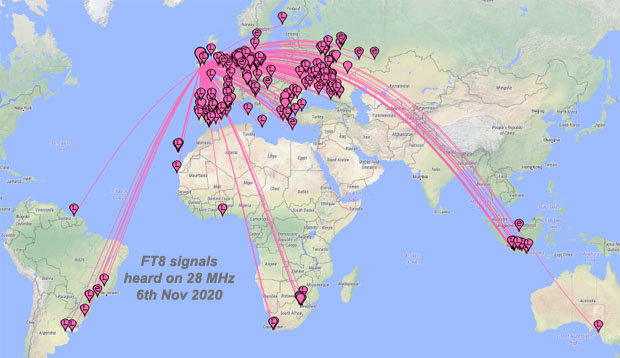 As the PSK Reporter map above shows, there was plenty of activity on the band on Friday the 6th of November 2020.

While there was some evidence of Sporadic-E activity around Western Europe, there was plenty of evidence of F2 propagation from Russia and SE Europe. Outside of some North-South propagation to Africa and South America, it was interesting to see openings to Indonesia and Australia.

There's always something special for me about hearing Australia on 28 MHz. It's no big deal on the other HF bands but for the path to be open at 28 MHz then something must be happening.

The Sunspots Return... The improvement in conditions on 28 MHz is due to the sunspots returning and the solar flux getting up into the low 90's. The chart below from NOAA (National Oceanic and Atmospheric Administration) in the USA shows the number of sunspots from 2009 to 2020 and projected out to the next peak of the solar cycle projected to be in 2025-2026.

It shows a peak back in 2014 and the minimum of the sunspot cycle in December of 2019. It also shows an increase in the sunspot number.
The chart below shows the minimum period in more detail.

As we come out of the sunspot minimum, there will be peaks and dips but the overall projection is still upwards. As the solar flux increases, the higher HF bands will spring into life especially on North-South paths.

It will be interesting to see when will we get regular openings to the USA on 28 MHz from NW Europe? It will probably start with openings to Florida but it's the F2 openings to Newfoundland, Nova Scotia and Maine that I'd be really interested to see.

Great to see such a dramatic uptick! 12m brought VK and OA the other day, and at very robust signal levels, too.

Let's hope we use this opportunity to get more people into the hobby better than we have in the past!

No doubt those NBFM transmissions from taxis in Russia will be heard all over the 28MHz band as well . I suppose there are no attempts to clear them from the band , even though it would be easy to trace them there .
Des Walsh EI5CD

The nice thing is that 10m is open already for over 2 weeks. I was a little late today but saw I spotted VK again. Had a few QSOs with ZS. When propagation decreased I switched to 12m which was alive. 73, Bas