2700km contact made on 2m from South Africa to St.Helena Island

It was announced on Southgate Amateur Radio News during the week that a contact had been made between South Africa and St.Helena Island on 145 MHz. 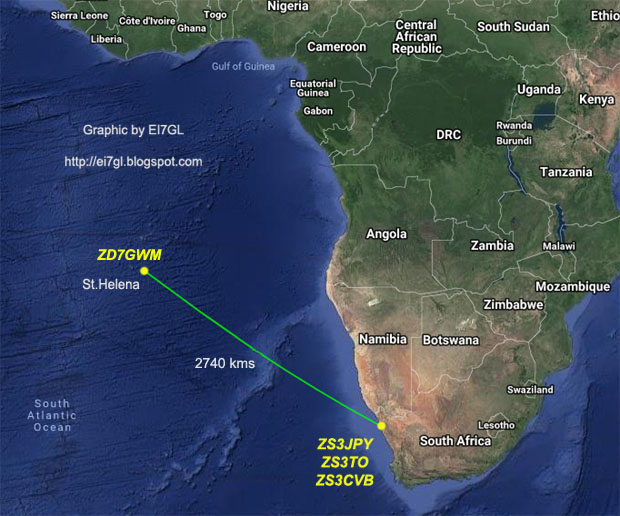 The QSO was on 145,500 MHz FM using a vertically polarised antenna between Garry Mercury, ZD7GWM and Kobus ZS3JPY and Michelle ZS3TO van der Merwe in Kleinzee as well as Cobus van Baalen, ZS3CVB in Port Nolloth.

They did try a QSO on 70 cm, but the signals did not provide for a successful QSO. "

Me and Cobus were having our evening qso on 145.500 and Gary called in and Cobus ZS3CVB said somebody is breaking in and iam jumping up and down screaming to Michelle: St Helena Island is calling in on the frequency!"

This was a really good contact especially as it was on FM as opposed to SSB, CW or FT8. The tropo forecast for the area shows very good conditions off the west coast of Namibia so the propagation mode was probably marine ducting.

How does this compare to other contacts made on the 2m band? This is the equivalent distance of 2740kms from the South-West of Ireland.

It almost reaches across the Atlantic to Newfoundland. However, it's also the same distance from Ireland to the Canary Islands off the west coast of Africa.

Most years, we have openings from Ireland and the South-West of the UK to the Canary Islands (EA8) via marine ducting tropo. It's unusual but not rare.

I suspect that the contact from South Africa to St.Helena is pretty much the same, unusual but not rare. If anyone looks at the topography of St.Helena then they can see that the populated area on the north-west of the island is blocked to the south-east by hills. ZD7GWM is in the centre of the island with a better take off and perhaps this is what made the difference. When similar ducting happens again...and it will, another contact may well be possible.

Although I seem to remember a news item from a few years back where someone in Namibia did tests on 2m with someone in Brazil?
Posted by John, EI7GL at Saturday, November 10, 2018