Back in February of 2021, I had a post up about the new 144 MHz on St Helena Island in the South Atlantic. On the 3rd of March, I reported that the beacon had been heard over 3000kms away in South Africa.

Now just two days later, F0FYF in France claims to have heard it.

For updates, scroll down to the end of this post. 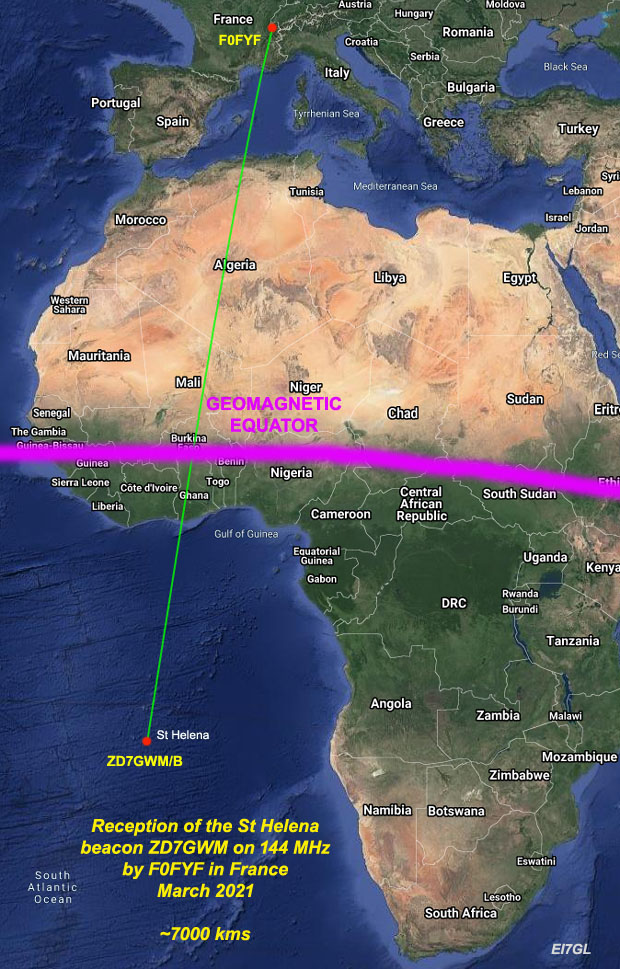 The path is almost 7000 kms! If confirmed then it looks likely that the propagation mode was via Trans-Equatorial Propagation (TEP) from St Helena Island to the north coast of Africa and then via tropo across the Mediterranean.

An audio recording from F0FYF can be heard below...

Check out the audio of the beacon here...

The D7GWM/B in CW can be clearly heard. The beacons locator is IH74DB.

In a post on his website, F0FYF wrote..."The other day, I was touring the audible beacons from my house on a VHF. The spread appeared to be good especially to the south / southwest. The Pic Neulos arrived in excellent conditions on 144.4765 Mhz, even CN8LI was audible at times, with great difficulty but the LNA was there to help. I used for these receptions, a stack of 2 x 9 elements at 7m from the ground on a temporary pylon (the neighbors cannot stand the sight of metal and their nausea and headaches happen, as if by chance, as soon as I mount my pylon, even not connected ^^, in short ..)

During my little tour, I stopped on 144.47535 Mhz after hearing some very delicate pieces of walrus to decode. The antennas pointed at 200 ° and as soon as I turned more than 5 ° in one direction or the other, the signal disappeared. Surely a reflection on a massif. 200 ° de chez moi passes just between the Semnoz massif and Le Mont du Chat. I am still at 700m with a fairly clear view from my home. I started the recording and I was able to recover some bridles but I couldn't get it correctly. Another OM that I had warned could hear absolutely nothing from his position. I went around MMMonVHF , my reference for beacons, to try to know its origin but I haven't found anything yet. The beacon disappeared around 11 p.m."

4) There are recent reports of 144 TEP on the DX cluster from the Caribbean to Brazil & Argentina. This suggests that it might be possible for the ZD7 beacon to be heard in Europe.

This is the second recording...

It would be great if more people in southern Europe could listen for this beacon on 145.475 MHz. If it is TEP as expected then it should be heard again in the late evening.

Like any good science experiment, we need more data points!

Update 1 of 2... 10th March 2021: There seems to be a difference between what the beacon really sounds like in South Africa and what was heard in France. This casts some doubt as to whether it was really the St Helena beacon. More to follow...

I was sent recordings of what the beacon sounded like when it was on the bench under test and what it sounded like as recorded by V51DK in Namibia.

I fed these audio clips and the one from F0FYF into the Spectrum Lab audio programme and this is what I found.

The three recordings are shown above. The dotted vertical line is a 2-second mark.

4) Character Spacing: If you examine the F0FYF recording, the space between the letter 'M' and the character '/' is about equal to the length of a dash. In the ZS1NAZ recording, this is clearly different.

I was sent recordings of what the beacon sounded like when it was on the bench under test and what it sounded like as recorded by V51DK in Namibia.

In conclusion, the signals as displayed above from the F0FYF and ZS1NAZ look different. To the ear, they sound different. The F0FYF recording as more of a T9 clean tone where as the ZS1NAZ recording sounding very different with the morse sounding more abrupt. As someone said to me..."The keying on this recording has a staccato nature".

The F0FYF reception recording was described to me as being probably a genuine reception of a non-genuine signal.

What really needs to happen now is for stations in countries like Spain, Portugal and the south of France to take their radios off the 2m FT8 frequency and listen for the ZD7GWM beacon on 144.475 MHz late in the evening. There are reports of 2m TEP in South America at the moment so there is no reason why it shouldn't be happening on this side of the Atlantic.

I listened to the whole recording and there are about 20 examples of where a signal can be heard.

This is what the recordings look like on the Spectrum Lab audio programme. I have them time stamped so you can have a listen yourself if you want to. There are five separate graphics and some will become larger if you click on them.

As you can see, the callsign ZD7GWM/B is being sent at two different speeds. Click on the image above for a closer look.
Also, have a look at the gaps between the letter Z and D on the two signals and they are different.
Not only do the signals look different but they also sound different to the ear.
After listening to the full 1h 54m recording, I'd have no doubt that the two signals are not from the same source.
Posted by John, EI7GL at Thursday, March 11, 2021

That does not sound like an evening TEP signal at all, you'd never get a pure tone like that. If the path does not include TEP, it must be something unusual - fascinating!

check location of ISS space station at that time ..
any other high altitude objects ??
funny is .. there is no doppler shift or ??
any tropo ducting around that time ??
maybe convince beacon holders to have beacons transmit in relevant digimodes too 50 % CW , 50 % Q65

was there a high flying object like ISS around ??
any special tropo duct ??

Do you hear a doppler shift on the signal ?? that might indicate the speed of the reflection object ..

There is TEP and TEP....spreading can be anything from near zero to several hundred Hz or more, maybe 800-900Hz in extreme cases. However, its usually accompanied by some serious chopping (60dB or so) of the signal, such that even with a strong signal individual CW characters will be lost.
Spectral analysis of the recording(s) suggests this is indeed the case here.
There have been many unexplained events like this in the past, probably the best is OK1AIY-ZS6LW on 432 on 08-March-81. Signals strong and spectrally T9 but the event was early in the morning....
There is NO correlation between TEP events and solar flux. Since all long distance QSO's reported tend to be a combination of prop modes then clearly TEP becomes more apparent in northern EU when there is Es/Tr or F2 linking.
My experiences of operating near the equator for the last 5 years or so means the current propagation rulebook went out the window long ago.
Keith G4FUF

Thanks Keith (G4FUF) for the explanation. Your description certainly matches what was heard in the audio clips.

I often think TEP is a neglected propagation mode in Europe, maybe it's a lack of stations at an appropriate distance south of the geomagnetic equator.

Beacon tone is perfectly clear, no fultter at all. Although it is TEP season now, time is a bit to late for 2m TEP, it usually occurs 1-2 hours after equatorial sunset. I don't know how long signals were present, but I wonder is ISS passage crossing near path mid-point about that time just a coincidence.(yes, i know - a big QRB for ISS reflection, but...)

Amazing��, callsign Was perfectly readible, while loc vannished after IH7...

After a review and comparison of the recordings from the beacon audio during initial testing, a recording made in ZS3 and the recording by the station in France it seems clear that the chance that it was the ZD7 beacon that was heard in France is very slim. Apart from the stated TEP issues, the speed and weighting of the CW is completely different. The ZD7 beacon has a very distinct CW signal.

Now there are 3 files its possible to make comparison.
First I will state that if you get someone to compare the ratio of 2 different vertical bars and tell you the proportion of the bars width to each other they will be 100% wrong, so visual interpretation of the waveforms can be misleading. This is a well acknowledged perception issue.
The ZS1NAZ and V51DK files are comparable.
Overall transmission length is 8.98s with a DIT, SPACE duration of 72.8ms and
the DAH 218.4ms, a correct ratio of 3,all timing is +/- 50us.
The inter-character gap is ~6.5 DIT elements, so that is not in accordance with the standard convention for mechanised CW.
The F0FYF file time is not comparable.
Overall transmission length is predicted as 10.4s with a DOT/DAH ratio of 3 and a DAH/inter-character spacing ratio of 1.
So, this recording is in accordance with normal mechanised CW with 1 exception....
The clue once you spot it is the leading DAH of "Z" is shortened.
That's the classic timing one would expect from a modern SSB/CW radio, first character is always truncated 10-20ms if break-in or VOX is used.
Despite the audible characteristics of the file the conclusion is that the F0FYF recording is what one might expect from a correctly programmed keyer but not the real ZD7 beacon unless its keyer has been recently reprogrammed....