There's a story that way back on the 14th of August 1959, there was a partial trans-Atlantic  contact between two MARS stations operating at 143.950 MHz!

W1REZ in Fairfield, Connecticut was operating under the MARS callsign of AF1REZ and the station at the eastern end of the path was using the call AJ2GA at the Torrejón Air Base near Madrid in Spain.
It is alleged that each station heard the other station and audio recordings are supposed to exist. It was thought that the propagation mode was meteor scatter aided by tropo ducting formed by two high pressure systems over the North Atlantic.
I examined the locations and the path was around 7,800 kms. The date of the 14th of August would certainly tie in with the annual Perseids meteor shower. 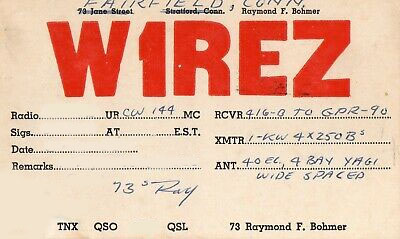 Is this one of those stories that when it got retold multiple times, errors crept in and it became essentially like an urban myth?
Or did a VHF signal just below the 2-metre amateur radio band really cross the North Atlantic all those years ago?
Posted by John, EI7GL at Wednesday, March 17, 2021

Very interesting! It's pretty clear by now that we only need the right alignment of conditions to make this possible, so all we need now is that to happen in the modern era, where we have all the equipment to record and confirm it.

Miguel you are right about that. 73 John PA5MS

FT8 (and similar) means there are multiple stations monitoring. It is also more sensitive than SSB and CW.