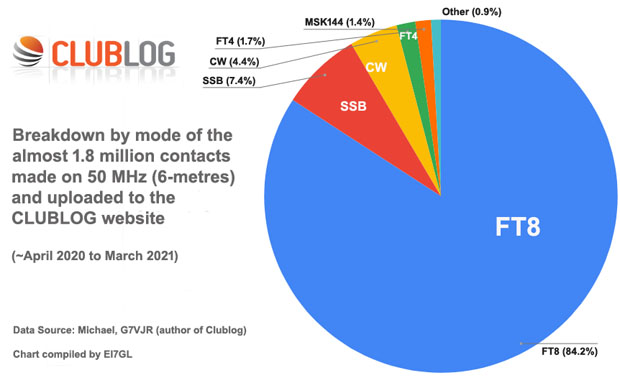 A new report by Michael, G7VJR of the popular  ClubLog website shows that an amazing 84% of contacts on the 50 MHz band over the last 13-months have been via the FT8 digital mode.

The data is taken from the almost 1.8 million QSO's logged on the site in the last 13-months.

This is bound to stir some controversy with a lot of people having misgivings about how this digital mode seems to be replacing the traditional SSB and CW means of communication.

As can be seen from this previous post, FT8 has enjoyed an explosion in popularity since it was released in 2017.

It does look though as if the pendulum have swung a bit too far in the digital direction. During the Summer Sporadic-E season, there are many times where signals are reasonably strong and a SSB contact could be completed in a much shorter time frame than say a FT8 contact with its 15-second transmission cycles going back and forth. 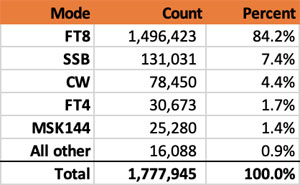 There is also the advantage of SSB and CW users being spread out over 100 or so kHz where as the FT8 users are all gathered at the 50.313 MHz watering hole.

How to get more of a balance though might be easier said than done.

This is why i have gave up on 6/4 , dont get me wrong i do see the plus side of ft8 ie propagation etc but i find it so boring and i have no interest at all in it , the big two could make a fortune selling a one freq rig as these days thats all they use and personally i am not going to spend my pocket money on a radio that i am not going to use or sit on one freq all day bored out my head , David