Is there a bogus ZD7GWM beacon operating on 144 MHz in the south of France???

Back in the middle of March 2021, I reported in a previous blog post how F0FYF in the east of France had heard a beacon on 144 MHz that was using the same callsign as the ZD7GWM beacon on St Helena in the South Atlantic.

After listening to various recordings, I was able to confirm that the signal heard by F0FYF was different from the real one.

Now, there is a report that the beacon has been heard by someone else in France but on a completely different beam heading. 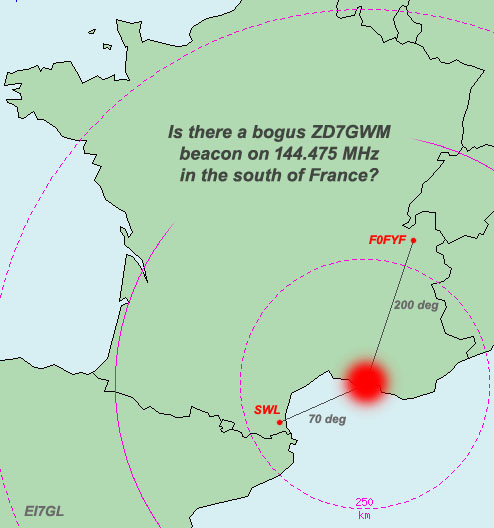 Someone left a comment on the blog of Jeff, F0FYF to say that they had heard the bogus ZD7 beacon on 144.475 MHz as well! This person said that he was in the south of Perpignan and that the 'beacon' was on a beam heading of 70 degrees from his location. He was using a 7-element Yagi on a 9-metre mast.

F0FYF originally said that he had heard the beacon on a beam heading of 200 degrees. I plotted out these two beam headings and they intersect near Marseilles. They also said that the beacon is often on air for 90 minutes to 2 hours at a time on a regular basis.

Is it located somewhere inside the circle above?? It would be interesting for some local French radio amateurs to have a listen. Is there an online SDR with 2m in the area?

2) Blog post on F0FYF blog with comments (in French)

Hi John,
There is F4IAH's websdr (http://websdr.f4iah.fr), he's located approx 70km NW of the plausible source of this fake beacon. It has R7_Marseille repeater as bookmark so I guess it could be possible to hear the fake beacon if the timing is correct.
73 de F4INU