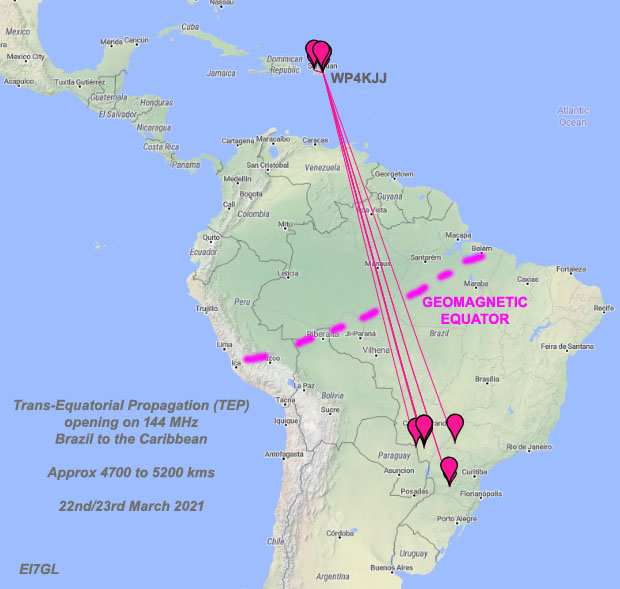 Around the time of the equinox every year, there are long distance VHF contacts made across the equator by means of Trans-Equatorial Propagation (TEP).

This year is no exception and on the evening of the 22nd of March 2021 (early morning on the 23rd in terms of UTC time), the 144 MHz band was open between Brazil and the Caribbean.

The map above shows the FT8 signals heard by WP4KJJ in Puerto Rico.

As can be seen from the chart, most of the distances are in the region of 4700 to 5200 kms.
It's worth pointing out that while the times for these TEP openings are around 00:00 UTC, that is about 8pm local time in Puerto Rico.
The TEP opening was also evident on the lower bands like 50 MHz with spots on the DX-Cluster showing paths from Brazil, Argentina and Chile across the equator to the Caribbean, Mexico and Central America.
The Band 2 FM band was also open as reported by the FM DX Brasil account on Twitter. 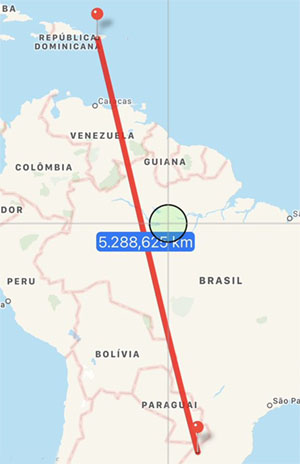 The map shows the TEP opening at 00:00 UTC with a FM radio station on 103.7 MHz FM on Puerto Rico being heard 5289 kms away in the south of Brazil.
I haven't seen any reports of 144 MHz openings across the equator in Africa and the Pacific. Is it just a lack of stations in the suitable locations? Are stations in the south of Spain and Portugal listening for the 144 MHz beacon on St. Helena???
Posted by John, EI7GL at Tuesday, March 23, 2021

The only info I could find on TEP in the Asia/Pacific region was this: https://www.sws.bom.gov.au/Educational/5/2/3

I am not well experienced in VHF/UHF propagation and the lack of people experimenting with this over here in this region make is very difficult to get into propagation research. For us here in Asia there are some VK beacons on 2m to monitor, but there are no 2m beacons at all that I know of (in J, BY, BV, HL, DU, XW) which the VK folk can monitor. 6m is a bit better with some beacons from J, HL and VR.

The FM broadcast band would be a good alternative to monitor, with the problem that this band is expanding here, with almost 80% of the frequencies occupied where I live. Luckily the Japanese still use the band below 87.5 MHz (down to 76 MHz), so for propagation checking (Es) this works well.

It's just too quiet here in Asia and I wish I was back in Europe to experience more activity on V/U. --Hans (BX2ABT, ex PA2BX)

In Thailand most of us on 2m FM but still have some on CW/SSB.
You can join https://www.facebook.com/groups/TSSBUG