Back in February of 2021, I had a post up about the new 144 MHz on St Helena Island in the South Atlantic. Now we have the first reception report! 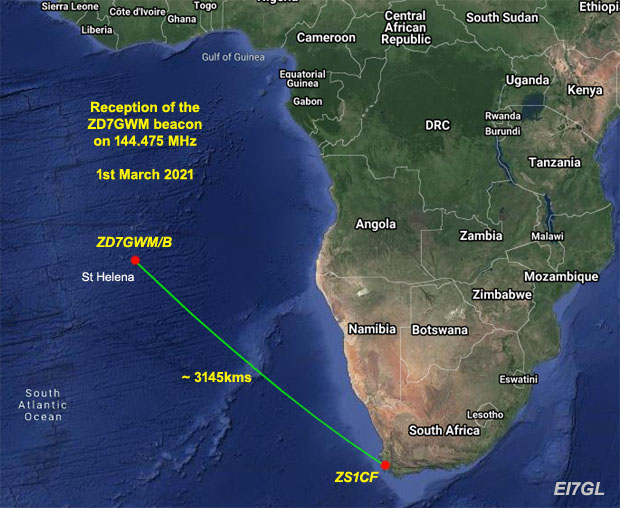 On the 1st of March 2021, Charles ZS1CF in Cape Town heard the ZD7GWM beacon on St Helena Island over a distance of approximately 3145 kms. The beacon operates on 144.475 MHz with 25 watts on CW into a vertical antenna. 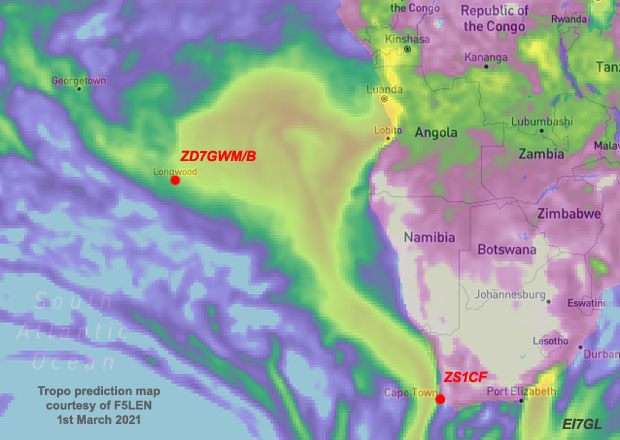 The tropo prediction map above from Pascal, F5LEN shows path and it is believed that the propagation mode was via a maritime duct just above the ocean.

This marine path from South Africa to St Helena is a relatively common occurrence and successful contacts have been made on 2m and 70cms in the last few years. It is hoped that the new beacon will give a better picture of just how often this 3000km+ path opens and encourage others to have a listen as well.

As outlined in the original beacon post, there may be a possibility of a 144 MHz trans-Atlantic path to Brazil or via TEP to Europe.

Please could someone enter the details of the spot (from ZS1CF?) on www.beaconspot.uk to help build a picture of the propagation? The Spot submission form allows BACK spots which are not passed to the DX Cluster, or LIVE spots which are passed on.

Back in 2007-2010, I was trying to drum up trans-Atlantic tropo ducting interest. I am very pleased to see more progress now. ZD7 to PY on 2m is 100% probable. I introduced John Turner at Saint FM, the local FM radio station, back in 2008-2010 to tropo ducting on the FM broadcasting band. He successfully logged many Angolan, Namibian, and Cape Town FM stations. One December he emailed that he was unsuccessful identifying an Angolan FM radio station as he had interference from a Brazilian station on the same frequency. This was using just a car radio with its whip antenna. Back in March 2008, ZD8I on Ascension Island reported that they sometimes heard Cape Town Marine Radio (ZSC) on 156.8 MHz FM. That is an omni antenna to an omni antenna on FM at a range of 4400 km. ZD8S reports listening to Brazilian FM stations with indoor portable radios. Since then, I spent the next ten years on Bonaire as PJ4VHF. My biggest tropo ducting success across the North Atlantic was the initial reception of D4C/b at a range of 4,694km. I strongly encourage any stations on ZD7 and ZD8 to be active on both 2m and 70cm. I have been studying trans-ocenic ducting for many decades (I started out as ZR2BI in East London). The South Atlantic may be the BEST location worldwide for long-haul ducting, both for range and how often the openings occur. FM vertical polarization works well bit SSB or FT8 on horizontal is even better. Maybe someday we may be allowed to and able to travel again, and I can afford to visit ZD7 in person. Until then, all I can do is strongly encourage others. 73, Dave N7BHC/PJ4VHF/ZR2BI dpedersen AT drasticom DOT com