I'm always interested to hear about exceptional VHF contacts or reception reports and I like to keep a record of them here on the blog to encourage more people to get active on the bands. I meant to put up this post months ago but it kind of got delayed! 😄

Back on the 16th of June 2020, there was a Sporadic-E opening on 144 MHz over eastern Europe with stations in the south of Russia working into Poland and the Czech Republic. What was really unusual was that it coincided with another opening further west from the UK & Ireland to the Czech Republic, Poland and Ukraine. 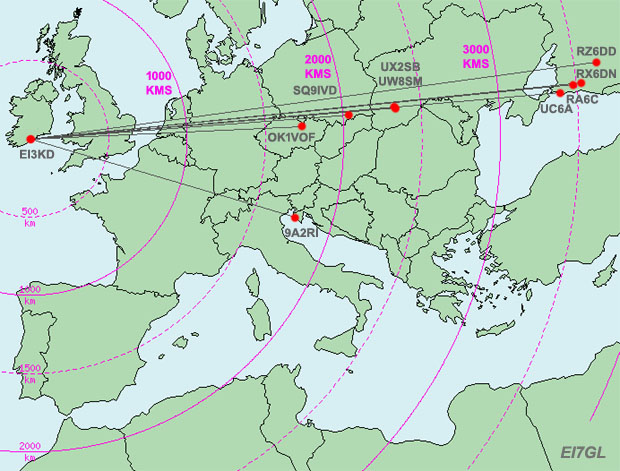 The normal maximum distance for single hop Sporadic-E is in the region of 2300 kms. What is highly unusual here is that EI3KD heard four stations in the south of Russia which were in the region of 3500kms!
The longest distance was RZ6DD at 3638kms.
The propagation mode was double hop Sporadic-E and this is clear from the fact that stations at the mid-way point were being heard as well. What's not so clear is if the signal was reflected off the ground at the half-way point or if it was chordal hop with the signal going between two Sp-E clouds without touching the ground. Whatever it was, it's an exceptional distance for 144 MHz.
This is an extract from DXMaps showing the DX-Cluster reports on that day on 144 MHz which were over 2500kms...

First a word of caution! As we all know, some mistakes occur with DX spots with people putting in the wrong band or info data. However, there are enough reports there to show that something special was going on that day.
You'll note that G4RRA in the SW of England also heard RZ6DD but at the slightly lower distance of 3356kms. See addendum below.
Why does this matter?... Because if someone in Ireland can hear a station in Russia on 144 MHz who is 3600+ kms to the east then why not across the North Atlantic to Newfoundland which is even closer at 3200kms?

Surely even if the chance of double hop Sporadic-E over the North Atlantic is incredibly small, there must be times when there are single hop Sporadic-E openings from either side with 1000kms of tropo making up the difference?
Wouldn't it be interesting to have a permanent online receiver based in Newfoundland with a beam pointing east and listening all of the time on 144 MHz? Stations in western Europe could then beam west and listen for their own signals online to see if the path is open. Or people could just log in and check if the receiver is hearing one of the Trans-Atlantic beacons?
At the moment, the North Atlantic path could open up on 144 MHz and nobody will ever know because there is no-one listening at the Canadian end.
Addendum: Thanks to Paul G4RRA for the following info...

Here's how my screen looked during that event. Both Mark and I are always looking out for events like this which are very rare indeed in my experience. 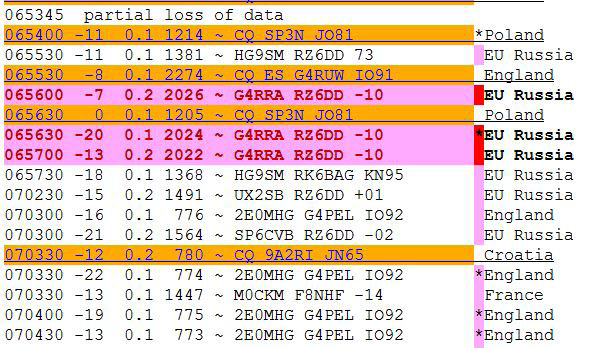 This was only the second one I've participated in in over 40 years, at least I managed a QSO in the first one !

These type of openings appear to be noted frequently over the last few years.
In reality they are actually pretty common, have been for years and also easily missed even over 100% land paths.
You can check LiveMUF or the EA6VQ animations for this day and see how there is a long chordal path stretching from the UK to UA6 where the MUF is above 144 for a good part of the path. This means access was not just limited to either end (and maybe the mid points if you really believe its 2 hops). Many stations could access the path off axis, so there is in fact multiple entry/exit points.
Another fine example is 16-06-2017, from JO01 it was open to Ukraine, hrd a CQ from UA4AQL (LO20) on CW and then for over 20 minutes solid to UA4 area out as far as LO53 wkd, LO77 (RA9) was hrd. Again, off axis QSO's for well equipped stations extended far south, i.e IN93(F2CT).
Observations are consistent with earlier red alerts gained from FM/airband traffic spots, I can only add you need to be on the ball, as well as behind the rig, FT8 now helps...
Earlier in the day following the big opening to JA on 6m my ODX on FM BC band was NN33 China, ~6200km....always expect the unexpected.

Keith, your reference to Chinese FM reception - do you have a recording? What was noted to make you believe you were receiving China. Was any PI or RDS information noted?

In the last twenty years only four receptions over 6000 km have ever been verified on the FM band by "Sporadic E" or it's variants, three by myself.

Any info would be interesting.

Not much there to support such a claim and given the path over land such reception would be almost unique for a broadcast FM signal. Tthe furthest verified reception I can find on Google for this band was by an English DXer in 2010, only 700KM further than this alleged reception, almost entirely over water and very few stations on the path to block distant signals.

What equipment was being used and how was reception confirmed?

At the moment, the North Atlantic path could open up on 144 MHz and nobody will ever know because there is no-one listening at the Canadian end.