On the morning of the 22nd of Dec 2008, I had a listen for meteor bursts from the GB3RAL beacon on 28.215 MHz during the Ursids meteor shower. This shower is supposed to have a number of active 'outburts' sometimes. This year, the forecast for the peak was for 07:30 UTC. 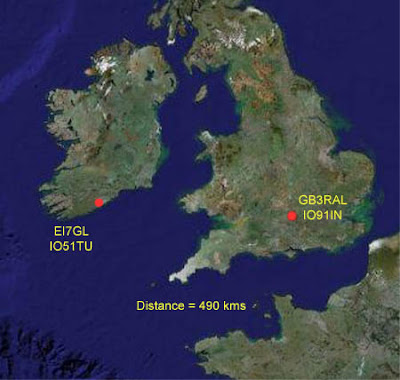 Why GB3RAL??.........I tried listening to other beacons in Europe around the 1,200 km to 1,500 km mark. Some run very low power so the refections are very weak. In addition, this distance is very good when there is any type of Sporadic-E propogation and it can be very hard at times to tell the difference between the Sp-E and meteor scatter. At least with GB3RAL at 490 kms, Sporadic-E is somewhat less likely and reflections for meteor scatter are likely to be stronger although shorter in lenght. 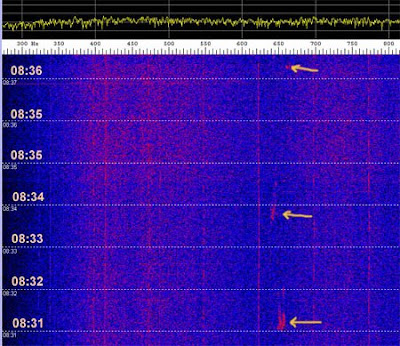 All signals were pretty weak. Note however that it was not possible to get a positive ID of the GB3RAL beacon as it's keyer is currently faulty. However, there would seem to be nothing else that it could be other than GB3RAL as there is no other beacon listed within meteor scatter range on that frequency.
From my point of view, there did not seem to be any 'outburst' in activity. Looking at the activity level plotted on the Make More Miles on VHF website, it does not seem to show much activity either. On the chart, the Geminids show up very clearly whereas the Ursids look pretty poor.