Another one from an old magazine article. This design is for a basic folded half-wave vertical for the 11m CB band on 27MHz but it can also be adapted very easily for 28Mhz or 29Mhz. For 10m operation, try reducing the half wave section to 5.10 metres and the quarter wave section to 2.53 metres. 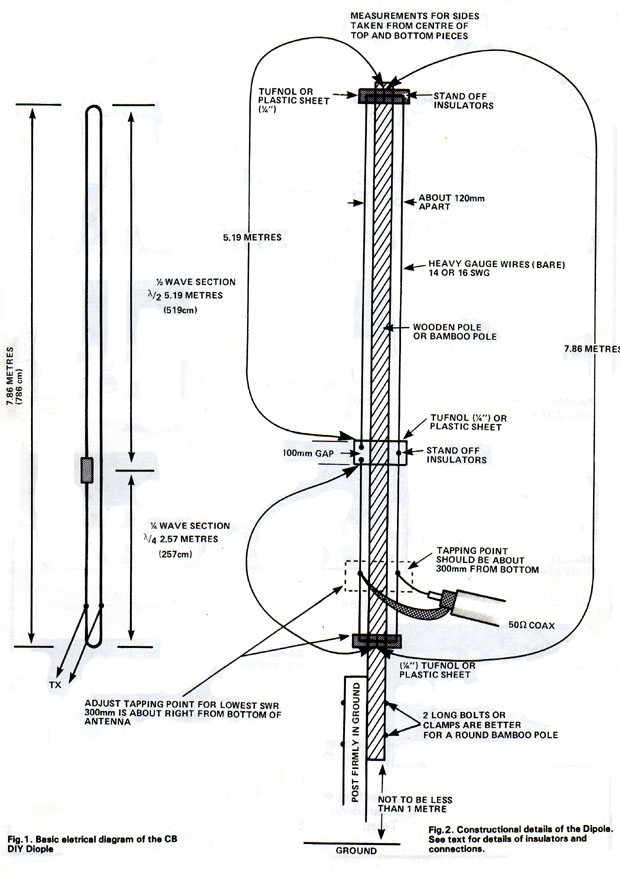 It really is a case of experimenting and see how you get on. It's likely the biggest challenge will be the mechanical construction rather than adjusting the VSWR.

One particular advantage of this antenna is that the quarter wave tuning section effectively puts the radiating element higher above ground level. This fact alone can have a significant effect on the performance of the antenna as it begins to get clear of buildings, electricity wires and other clutter near ground level.

A lot of novice CBer's get fixated on 'advertised gain' and different types of antennas whereas they should be concentrating on getting a decent antenna up as high as possible.

While the Slim Jim won't be as good as say a Yagi beam up on a tower, it should still perform pretty well.
Posted by John, EI7GL at Friday, January 13, 2017

Hi John, just for info. There was a commercial 11m slim jim made here in the Netherlands for a short time. See: http://www.hpsd.nl/contact/j-pole.
It could be a interesting view for mechanical reasons. I know this antenna works very well compared to a endfed 1/2 wave for example. The advantage is in the height as this design is 8m long!
73, Bas

Thanks for the link Bas. That looks like a really nice version.

I think one of the biggest problems with a vertical on 10m / 11m is the mechanical strength in the wind. 8 metres is a lot for a vertical antenna without supports.