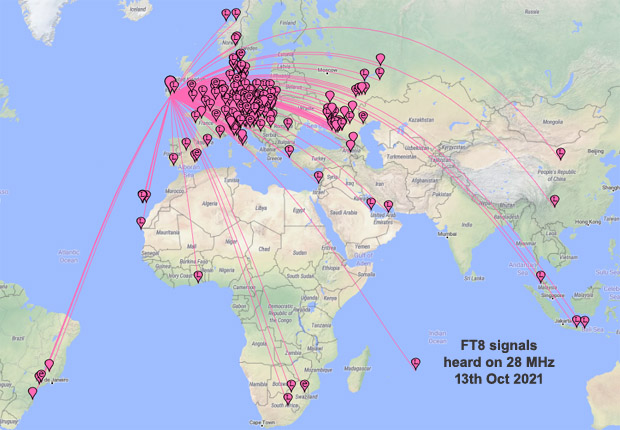 Wednesday 13th October 2021: The big openings to the USA on 28 MHz seemed to have eased back a bit in the last few days and no two days seem to be the same. The 13th of October was a bit like that with an F2 opening to the east but very little to the west.
A total of 200 FT8 signals from 39 countries were heard on the day but most of these were due to a  Sporadic-E opening to Europe. In truth, there weren't that many F2 signals in comparison to some of the openings of late.
The ones I found of interest were the signals from China which I think were the first for me this season. On 28 MHz, it's not always the stations that are furthest away that are the most interesting but it can be  those East-West signals with the most northerly path.
The solar flux on the day was at 84.
Signals from China...
BG9NJY 10m FT8 8148 km 10:56:59
BH8MDV 10m FT8 9094 km 10:26:14
Posted by John, EI7GL at Thursday, October 14, 2021

Email ThisBlogThis!Share to TwitterShare to FacebookShare to Pinterest
Labels: 28 MHz

Many from south america and few from west-indies late in the evening here. Received one from FL, USA. 73, Bas