The annual PACC contest was held last weekend the 11th and 12th of February 2017 and is the highlight on the contest calendar for many Dutch radio amateurs. I hadn't really planned on entering but I thought I might support the contest of a neighbouring radio society.

There are 12 provinces in the Netherlands and each one was a multiplier on each band... 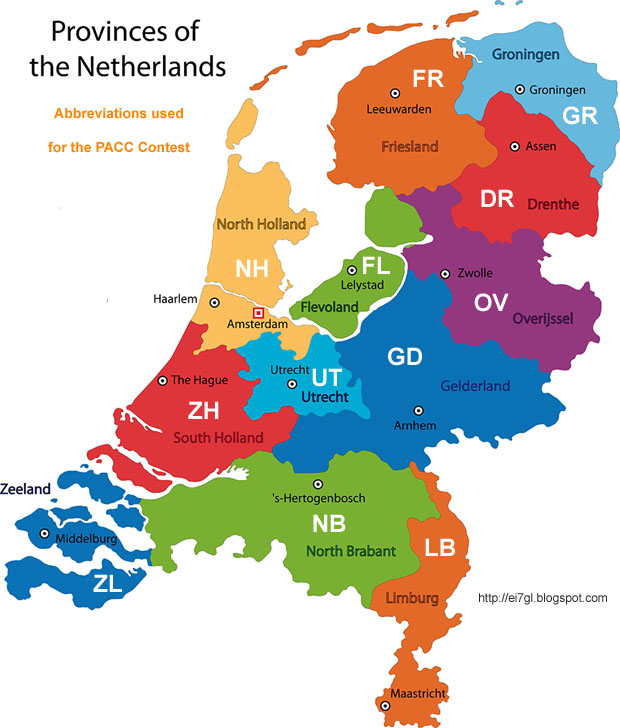 I operated on CW only on 40m and 80m and only replied to stations calling 'CQ TEST'. I had a quick listen on 20m during the daylight hours but I couldn't hear any Dutch stations, only stations in Eastern Europe looking for PA stations. Obviously with a Solar Flux in the low 70's, the MUF was pretty low and the distance for EI to PA was too short for F2 propagation.

As I don't have an antenna for 160m, that just left 40m and 80m for working into the Netherlands.

40m seemed good from about 3 hours before sunset to well into the night. It was the same the next day...good until about 3 hours after sunrise.

80m was a lot more defined as it had to be dark for the path to work. It was interesting how nearly all the PA stations disappeared on Sunday morning within a 30 minute window as sunrise occurred in the Netherlands. 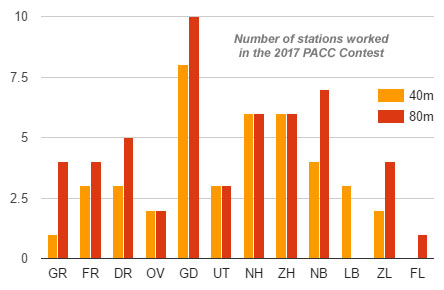 Of the 12 provinces, I worked 11 on 40m and 11 on 80m. I probably could have worked the missing ones if I had gone hunting for them but I was only giving out points to contest stations.

I ended up with 94 contacts including one dupe which crept in. Someone was sending PACC as part of their callsign and I mistook that to be a special contest station. In hindsight, it probably wasn't.

Some of the stations I didn't work were...
a) Ones who was sending cw so fast that I couldn't make it out.
b) Stations who were hopping around. They would call CQ....I'd check my log in case it was a dupe...but they were gone before I could call them.