The BBC recently released this old television clip from 1949 explaining how an amateur radio station in Cape Town, South Africa had received TV signals from the UK. 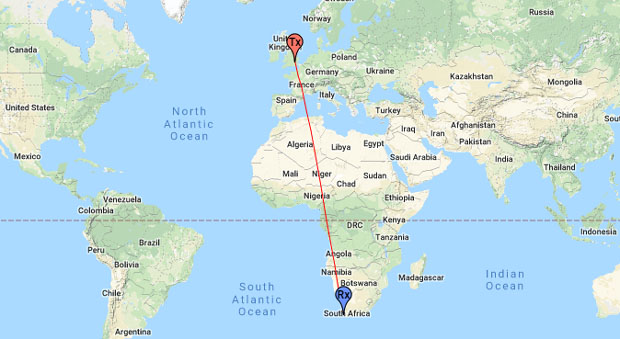 The TV transmitter mentioned in the video was a 405 line transmission from Alexandra Palace in North London. This was vertically polarised with a power of 500 kilowatts (ERP?).

The reception report in 1949 was near the peak of solar cycle 18. As can be seen from the chart below, that was a really good sunspot cycle and conditions were probably excellent on all the HF bands and well up into the low VHF region.

The most likely mode of propagation at 45 MHz was probably multi-hop from the F2 layer in the ionosphere. The maximum usable frequency was probably above 50 MHz so the signals on 45 MHz should have been very good.

It's likely however that with a video signal spread out over three and a half megahertz, the picture was probably very distorted and constantly changing. It should have been possible however to have very good reception of the sound on AM on 41.5 MHz with a dedicated radio receiver.

The radio contact shown in the clip between G8IG in England and ZS1PK in Cape Town, South Africa was probably on 28 MHz AM (note the beam at the start of the clip).

The South African station mentioned that signal were better when things were calm which might infer some sort of tropo ducting. That is unlikely to have been the case as it was very probable that all propagation was via the ionosphere and the weather conditions would have no impact.

All the same, it's an interesting example of early low band VHF TV reception.
Posted by John, EI7GL at Saturday, October 12, 2019

This should be reported on the Wikipedia F2 Propagation under Notable F2 DX receptions.