Over the last few years, the D4VHF station in the Cape Verde Islands has made some amazing contacts on the 144 MHz & 432 MHz bands across the Atlantic to the Caribbean and also well into Europe. Most of these VHF and UHF contacts are in the region of 3000 to 6000 kms.

They recently made some major changes to their antenna system for 2-metres, 23cms and 12 cms.

2-metres... Up to recently, the D4VHF team were using a single 12 element Yagi on 144 MHz. They have now installed three crossed 5-element Yagis. 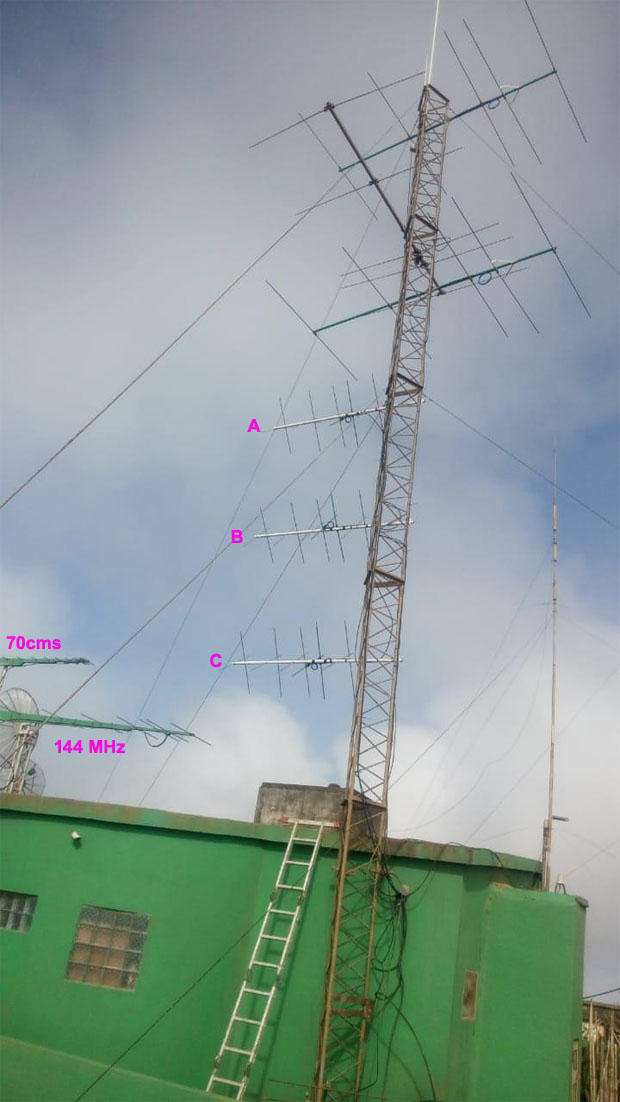 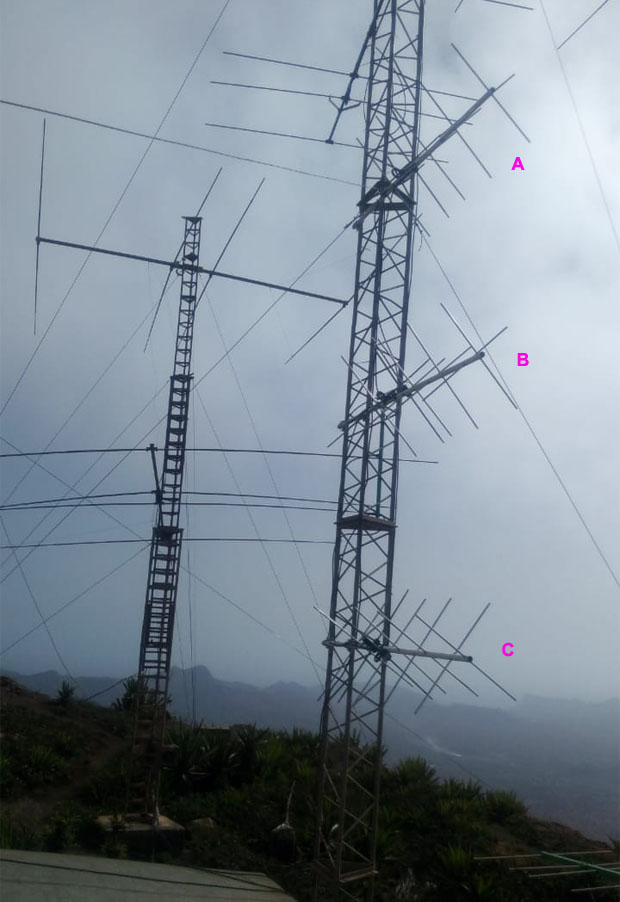 This second photo above shows the stacked Yagis from a different angle. Each individual crossed Yagi is made of two 5-element beams in a X configuration. These two beams are  fed 90 degrees out of phase relative to each other and this achieves Right Handed Circular Polisation (RHCP).

Gain... The old 12 element Yagi which was horizontally polarised probably had a free space gain of about 13dBd.

As for the new stack? Let's take the gain of 5 element beam to be 9dBd. There is a stack of three so lets add 5dB giving a gain of 14dBd. Lets assume that there is some loss stacking as they will probably not get the full three times power so we'll subtract 0.5dB giving 13.5dBd. There is also a 3dB loss due to the fact that it is using circular polarization and we're down to about 10.5dBd.

Linear Vs Circular Polazation... When both the receive and transmit antennas are horizontally polarized at either end of a propagation path and nothing changes then everything is fine. However when the path is several thousand kms in length, will it always stay the same? If there happens to be a Sporadic-E hop involved then the polarization of the signal is constantly changing.

With very weak FT8 signals buried in the noise and with 15 second transmissions, this polarization fading can mean incomplete contacts or at the very least, it slows things right down resulting in fewer contacts during say a Sporadic-E opening.

With a circularly polarized antenna, the loss is never more than -3dB. So even though the gain of the new antenna stack is slightly less, the lower loss due to polarization changes should result in more completed contacts.

Beamwidth... The other change between the new and old systems is the beamwidth. 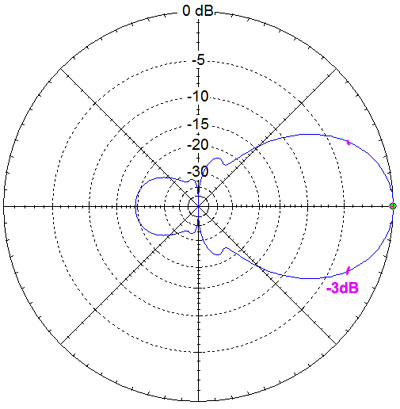 The beamwidth of a beam is measured by its -3dB points i.e. where the gain of the antenna has dropped by 3dB.

For the old 12 element antenna with a gain of about 13dBd, the beamwidth was about 32 degrees.

This map shows the beam headings from Cape Verde to Europe... 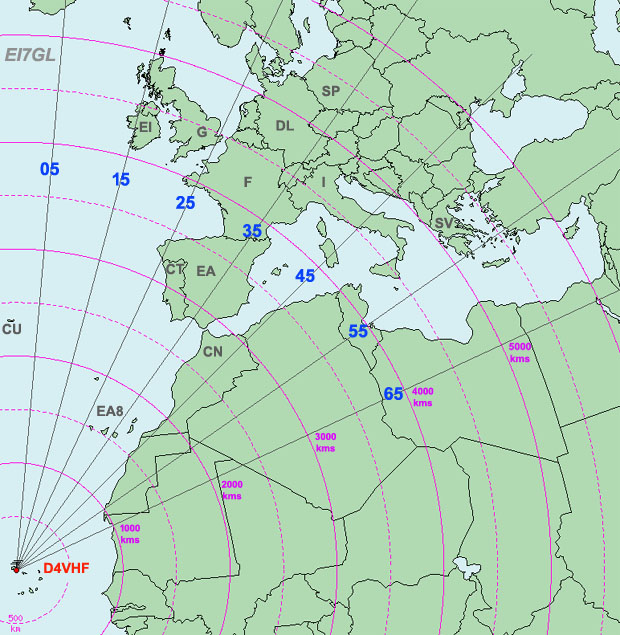 With the old 12 element pointing at 35 degrees, the 32 degree beamwidth covered about 19 to 51 degrees.... roughly from Wales to the south of Italy.

With the new array for the same 35 degree example, the 54 degree beamwidth will extend from 08 to 62 degrees. This means that there is more power heading towards say Ireland, Scotland and the Azores.

It also allows more power to head towards the Eastern Mediterranean. It seems unlikely that someone from say Greece or Israel could work D4VHF on 144 MHz as there is a lot more land and less sea for a marine duct. But that's not to say its impossible, especially at this more southerly latitude.

Microwave Bands.... They also made some improvements to their set up for the microwave bands of 23cms and 13 cms. 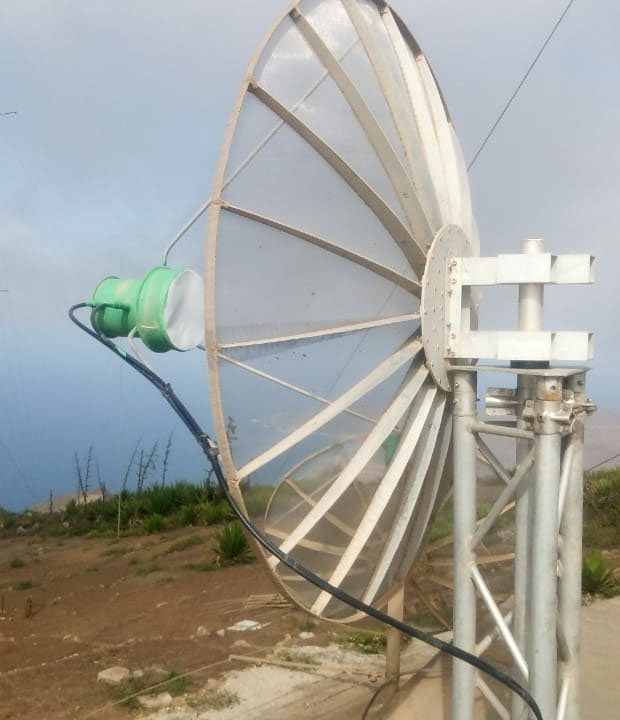 The photo above shows the 1-metre homemade dish for 1296 MHz and 2300 MHz. The gain on 23cms is approx 19dBd while the gain on 13 cms is about 24dBd. They will be adding an elevation motor so that it can be used for moonbounce. 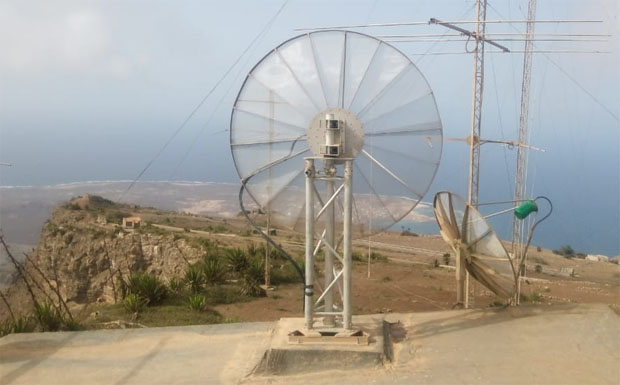 This is another view of the same dish but it also shows the 80cm dish on the right for accessing the QO100 satellite in geostationary orbit (2.4 GHz up, 10 GHz down).

In conclusion... As you can see, the D4VHF team are constantly improving their station on Cape Verde and are opening up new paths that we didn't even know existed.

If you would like to support their work then they have a PayPal link HERE
Posted by John, EI7GL at Sunday, July 05, 2020