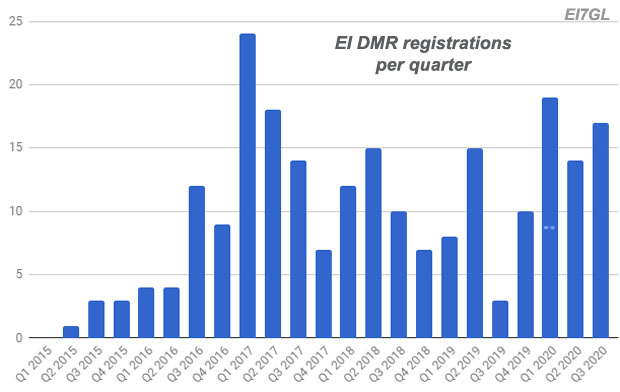 The above chart shows the number of DMR (Digital Mobile Radio) registrations by EI stations for every quarter up to the end of Q3 2020. The first DMR numbers were issued in 2015 and this peaked with a surge of interest in 2017. After that, the number of registrations per year slowed and dropped by about 30% to a lower level.

It now looks as if 2020 has seen a rebound in the registration numbers with the numbers at the end of Q3 2020 already ahead of the total for 2019.

The first quarter of 2020 had 19 new registrations but 10 of these were for club call signs which will probably never be used. The second and third quarters were for individuals and show a renewed growth in interest and numbers. Even if the club calls are removed, it looks likely that 2020 will end up as the second highest year yet in terms of new DMR registrations.

As of the end of Q3 2020, a total of 229 DMR numbers were issued for EI calls. If the club calls and duplicates are removed then 192 individual EI stations have DMR numbers.