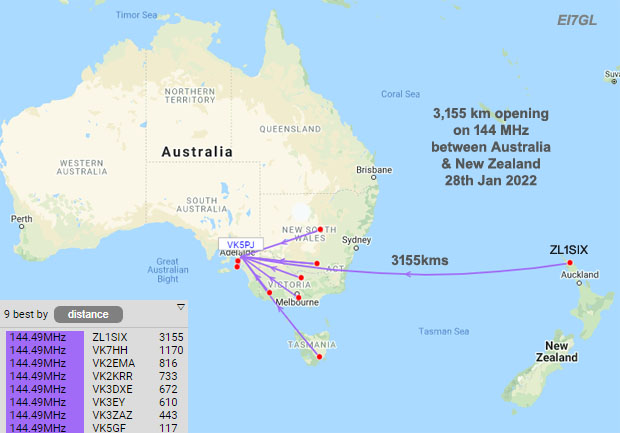 28th January 2021: There was another 3000km+ opening on 144 MHz between Australia and New Zealand when Peter, VK5PJ in Adelaide received the WSPR signal from Bob, ZL1SIX.

The two WSPR decodes are shown below and the signals were pretty weak at -19 and -20dB.

The map above shows the WSPR signals heard on 144 MHz by VK5PJ over a 24 hour period. Most of the Australian signals are tropo but the 3155km distance was really something else.

Remember, 3155kms is the distance between Ireland and Newfoundland across the North Atlantic.

Propagation??... It's important to note that VK5PJ was the only station in Australia to hear ZL1SIX on 144 MHz that that. i.e. none of the closer stations near the south-east coast heard him. This does suggest that Sporadic-E was the main propagation mechanism.

One single Sporadic-E hop might account for a maximum of say 2300kms but not 3155kms. What makes up the difference? 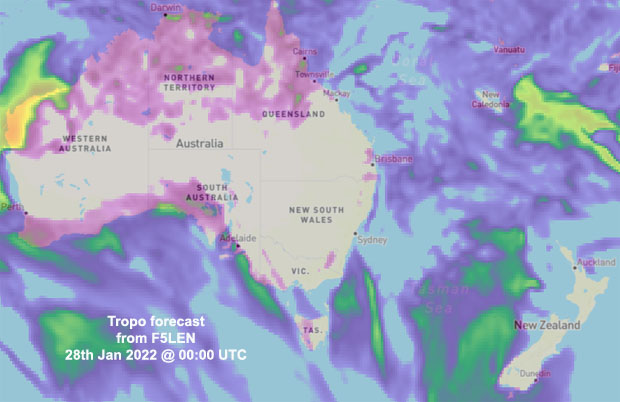 The map above shows the tropo prediction from Pascal, F5LEN and it suggests that there might have been some tropo ducting over the Tasman Sea.

It's possible that the western path of the 3155km path was due to Sporadic-E and that coupled into a maritime duct for the remainder of the circuit to New Zealand.

A second option was that it was due to chordal hop Sporadic-E with the signal going between two Sporadic-E 'clouds'. This does happen at 144 MHz but it is relatively rare.

It's impossible to know for sure what the propagation mechanism was but the probability of a combined Sp-E / tropo duct opening is higher.