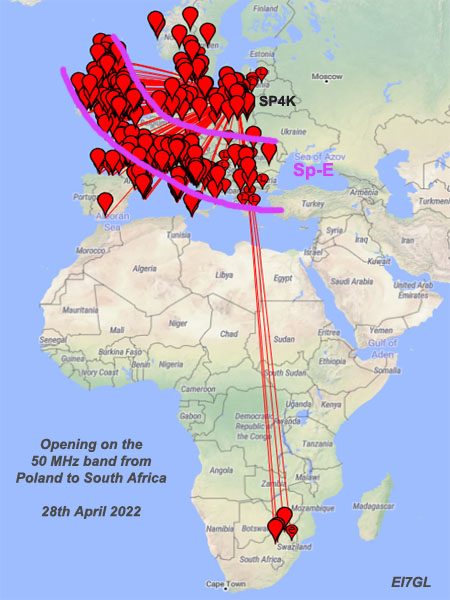 The Trans-Equatorial Propagation (TEP) season tends to peak around the equinox while the Sporadic-E season peaks during the Summer months.

Late April and early May can be a very good time for North-South paths as the two seasons overlap.

Explanation... For stations in Spain, Italy & Greece, they are far enough south to be able to to exploit 50 MHz TEP openings to the south of Africa. Stations further north are too far away for TEP but that changes when the Sporadic-E season starts and there is an opening to the south.

This allows northerly stations to now access the TEP zone further south. This can be seen in the map above. The usual Sporadic-E zone of signals in the 1000-2000km range are shown. For SP4K, there was an opening to the south by Greece and then onto the TEP zone over Africa.

This is the situation for all northerly stations in Europe or the USA and Canada. Late April and early May is the time to beam south and look for those openings to the southern hemisphere.

Recently got a transceiver that can work on the magic band, got a 5 element LFA yagi from Innovantennas. New territory for me but I was wondering: only FT8 on this band? That would be a dissapointment because digital modes isn't my cup of tea :-( 73' Chris, PA0TVI

Chris, 99% of the DX on 50MHz these days will be found on FT8 and even FT4. No digital modes means no DX. Or at least a lot less DX. There will still be some on CW/SSB. Good luck on the magic band. I'll point my antenna south these days. 73, Bas