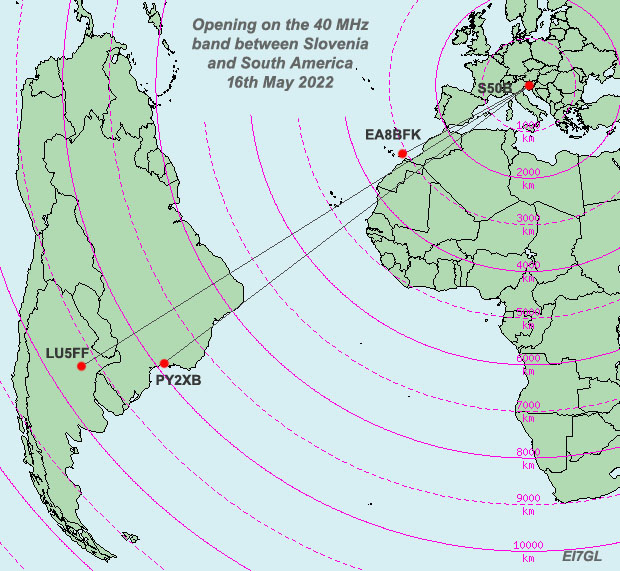 Borut's 40 MHz was also heard by EA8BFK in the Canary Islands (3095kms) on the 11th and the 17th of May.  I don't know if the path to EA8 was open on the 16th but it does suggest the F2 layer propagation might be reaching as high as the 40 MHz band on north-south paths on a regular basis.

As there have been reports of recent openings on the higher 50 MHz band from Europe to South America, it should be no great surprise that there was an opening on the lower 40 MHz band.

I'd suggest however that this shows how valuable the 40 MHz band is to radio amateurs and to those interested in propagation research. Signals on the 40 MHz band give an early warning of potential openings on 50 MHz as the Maximum Usable Frequency (MUF) will often be just below 50 MHz. If someone hears a 40 MHz signal then at least they know what direction an opening might be likely.

It's also good to see some of the radio amateurs in South America getting interest in the 40 MHz band. It will be interesting to see if they report on any openings to the experimental stations on the 40 MHz band in North America.