I received an email recently from Rob, PE9PE looking for the email address of Des, EI5CD to pass on some information about some unusual signals at the bottom of the 26 MHz band. I didn't have the email info but I thought the information would make an interesting post and I'm sure Des will see it as well.

The concept of Ocean Radars is quite simple... a radio pulse is sent out by a transmitter at the shoreline, some part of the signal is scattered by waves on the ocean and this is picked by a receiver back at the coast.

It's described as follows... "How it works: We measure ocean currents by emitting radio waves from shore-based transmitting antennas that travel along the ocean's surface. The radio waves are scattered by the rough surface of the ocean (ocean waves) and part of the scattered energy returns like an echo to a receiving antenna.  The received echoes contain information about the range, direction, and speed of the current in relation to the antenna location. Combining this information from two or more antennas allows us to construct surface maps of current speed and direction."

The ITU frequencies for these systems are as follows:

My main interest here are the systems operating at 26 MHz and above and how they might be used as a propagation indicator. There may be more frequencies but these are the ones I am aware of for now.

Systems... There seems to be two main companies in this space.

1) CODAR OCEAN SENSORS from the USA have their SeaSonde system and their website is https://codar.com/ 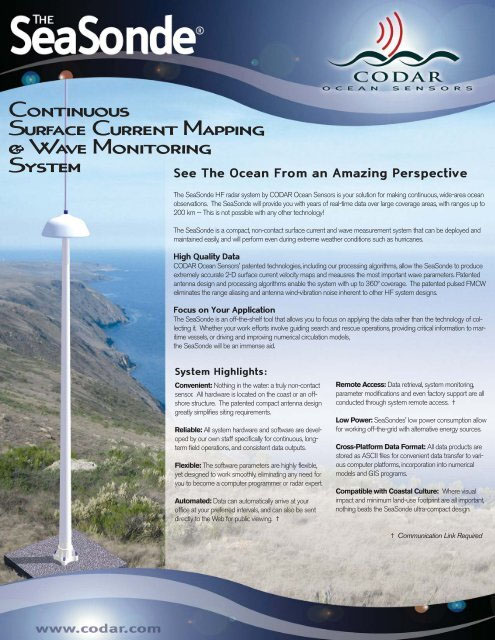 As their information document above shows, the antenna for this system is just a vertical whip.

When someone mentions a 'radar system', I think most of us imagine some sort of huge antenna array with many kilowatts of RF power. From the information I could find, it seems that 50-watts is typical power level.

Some use a small array of vertical whips side by side which probably help focus the signal on a certain area but it's nothing too elaborate.

There seems to be examples of these located at quayside walls next to where the public are walking so the power density is low.

An example of what the CODAR signal sounds like can be found here (just click on the audio sample on the right)... https://www.sigidwiki.com/wiki/CODAR

2) The other company is HELZEL from Germany and their website is https://helzel.com/

This is an example of their WERA VHF system...

High resolution VHF WERA - ITU bands 39.2, 41.4, 42.2 and 43.5MHz
Characteristics:
Typical range resolution of 300m
Best for highest resolution current measurements up to 25km
Wave measurements for Hs >0.2m for ranges of up to 10km
These systems use very small antennas and short arrays
Best suited for mobile applications
This is a map of some of their systems operating in Europe as of Q4 2022... 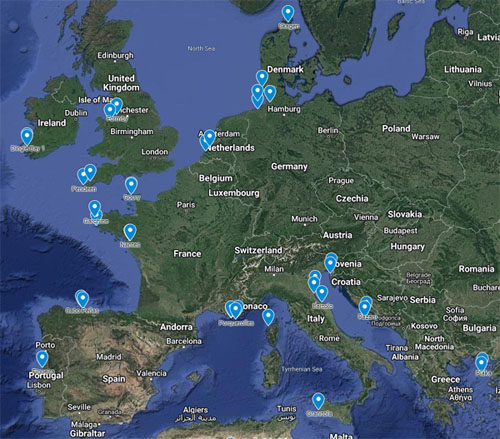 They don't mention what frequency... HF or VHF... is used by each one of these locations but I'm sure many of you will be living near one and wondering what it is.

After Rob told me about these signals, I found one around 26.300 MHz. I found it best to listen on AM and have the filters as wide as possible. In my case, that was 12 kHz.

It sounds like a rapid ticking or clicking noise. If you could imagine say a clock ticking once per second then this radar system sounded something like 3 ticks per second.

I don't have a sample of it to include in this blog post but it's easy to recognise.

Video... This video about the SeaSonde system gives an overview of its purpose...

Propagation indicator... Can we make use of them? While it will be very difficult to identify the location of any individual ocean radar system, they can still be used as a sign that a band is open.
There are many instances of when 21 MHz is open and 28 MHz is dead or 28 MHz is open and 50 MHz is dead. At least these ocean radars give some warning of improving conditions on a frequency in between.
Low Band VHF... There seems to be a general assumption that low band VHF (30-50 MHz) is dead and most of the users have migrated to the higher UHF bands. This is one instance where low band VHF and it's particular wavelength has a useful application and niche.
Q. Do you have an ocean radar system operating near you? Let me know your location and it's frequency and I'll add it to the post for reference.
Posted by John, EI7GL at Wednesday, November 23, 2022

26.300MHz I think this one is somewhere between the east coast of Spain and The Balearics, it's been about for a few years and appears during Es on 11/10M to that area. During F2/TEP I've also been seeing a CODAR on 26.00MHz but I've yet to locate this one.

The 26.3MHz one is very close to Gibraltar. It is receivable on ground wave in Gib and it blights one of the Freeband calling freqs on 26.285. There is another one around 26.2 but that doesn't seem to propagate in sync with the 26.3 one.