Upgrade of WSJT-X software and the 40 MHz band

Just a post of some notes for my own benefit although others might find it useful as well.

Even when I wasn't updating the blog for the last six months, I was still using the radio in that I left it monitoring the WSPR frequency on 28.1264 MHz every day. The software I was using on the PC was WSJT-X with quite an old rev V2.0.1 which I think is from 2019?

I never really bothered updating the version I had as it decoded WSPR and FT8 signals fine. I know my old version didn't decode the 'new' FT4 mode but I wasn't too bothered about that.

I tried listening for some of the Irish 40 MHz beacons this morning. I managed to get two two successful decodes from EI1CAH on 40.16 MHz using the PI4 mode. I think this was via aircraft scatter.

The other beacon EI1KNH on 40.013 MHz uses several modes including FT8 so I had to be careful as I didn't want to 'hear' something on 40 MHz and have my PC upload it to PSKReporter as a 28 MHz signal.

It essentially looked the same when I ran it. From the default settings, it doesn't show 8m (40 MHz) as a band option. 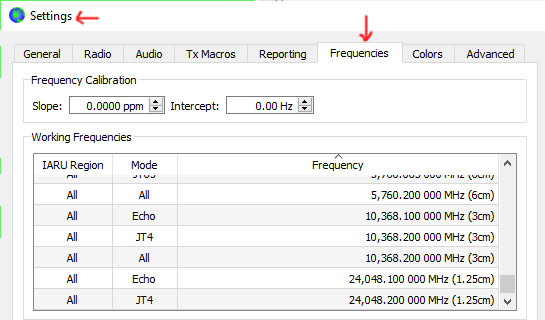 Under 'File', I had to go to 'Settings...' and then click on 'Frequencies' as can be seen above.

There are loads of options here... I picked the one that was All mode on 24 GHz as I was pretty sure I wouldn't need it 😉

Then it's just a case of double clicking on it and changing the frequency. I chose 40.680 MHz... and then clicked ok.

In the end, I didn't manage to any FT8 decodes from the beacon but I probably need to improve my antenna system.

At listen I can report any signals that I hear now.

Addendum... I finally managed to decode one FT8 transmission from EI1KNH which I think was from aircraft scatter again. 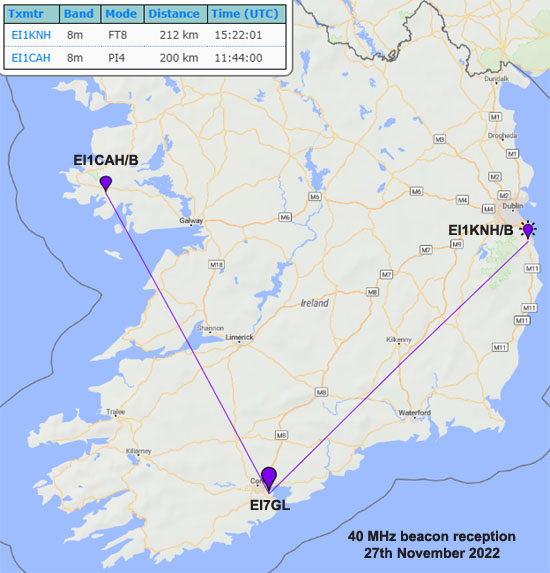