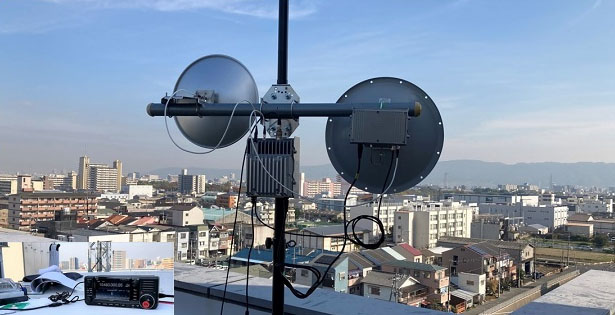 On the 17th of November 2022, ICOM staff in Japan conducted some experiments over a 25km obstructed path on the 5.6 GHz and 10 GHz microwave bands with the company's new IC-905 transceiver.

The photo above shows the view from the roof top of the six story building at ICOM's headquarters in Osaka. The two parabolic dishes for 5.6 GHz and 10 GHz are beaming towards the Ikoma mountains. The RF module of the IC-905 and the 2.4 GHz to 10 GHz transverter are also shown. The station at ICOM HQ was JK3AZL.

The second portable station JL3ZAB with a similar setup was operating from a hill near Kizugawa City which was about 25kms away on the other side of the Ikoma mountains. The map below below shows the path in Blue. The important point here is that both stations were blocked from each other by the mountains but both were line of sight to Mt Ikoma.

Both stations started early in the morning, setting up their radio equipment and antenna systems. By 9am, both stations were able to easily catch each other's signals by pointing their parabolic antennas at the summit of Mt Ikoma using a map and compass and were able to communicate by voice on both the 5.6 GHz and 10 GHz bands.

It is believed that the propagation mode was knife-edge diffraction from the mountain peaks.

The test was repeated later with JL3ZAB now operating from the ICOM Narayama Laboratory. From this lower location, the summit of Mt. Ikoma was now longer visible. They were barely able to communicate on 5.6 GHz with CW while communication at 10 GHz was not successful.

The path from ICOM HQ to their Narayama Lab is shown above in Red. The path profile is shown below albeit with an exaggerated vertical scale.

The ICOM team concluded... "It is known that in the SHF band or even higher frequencies, radio propagation gradually becomes more linear, similar to light. The Icom team thought it would be interesting to see whether communication will be impossible under non-line-of-sight conditions as in this case, or whether communication by mountain diffraction (Knife-edge effect), known as anomalous propagation, would be possible.

The experiment revealed that mountain diffraction phenomena occur even on mountains with relatively gentle peaks such as the Ikoma Mountains. Conversely, if the peaks are not visible, communication is difficult."

Analysis... Once the ICOM IC-905 goes on sale, people that purchase it may well expect only line of sight contacts as that will be the mantra of most websites and commentators. With high gain antennas and weak signal modes, there will be many unusual paths like the example above.

In an urban environment, there may well be many reflections off objects like high buildings, water towers, masts, etc.

If you consider that tropospheric ducting often occurs more often at microwave frequencies then there are bound to be surprises for those who are interested in experimenting on these amateur bands above 1 GHz.

a) More info about the IC-905 on my Microwave page

I'm active on 10 GHz with 2W and a 48cm diameter Prime Focus dish, so, a small setup. The past 12 months, I have been able to make several 800 km+ QSO via tropo (ODX this year 917 km), using SSB or CW. Daily, without any propagation enhancement, I'm able to work over at least 250 km paths.
And speaking about Rain-Scatter (summer time, when thunderstorms), there are many long distance QSO's opportunities (ODX this year 871 km) too.
So, indeed, microwave bands are by far not limited to line-of-sight or short range paths.
73 de ON4KHG (http://on4khg.be)

Will ICOM make any money from this? Doubtful.

Keep in mind that a lot of the development from ham radio products is a test bed for future commercial products... and you and I pay them to be beta testers.

We may be beta testers, but we get some nicely engineered gear with which we can experiment and also do useful things with various data modes in the microwaves. I'm sure that we will see hams revealing and confirming propagation in specific areas, getting on EME, running localized data networks without the Internet, doing modifications, creating accessories, writing software and more!

The farthest network which I can receive daily is located 55 km away. There is no LOS, but there are some wind turbines that reflect the signal up to -80 dBm. Once when inversion was present it reached -43 dBm per polarization.

My distance record is 745 km. Network from Northern Denmark received in Poland during DX-pedition: https://fmdx.pl/2020/08/5ghz-wifi-dx-record-denmark-logged-in-poland-745-km/

Around 99% of received networks via tropo are outdoor devices with external antennas (with quite high EIRP), but the remaining 1% are the indoor domestic routers. My indoor DX record is currently 281 km (see the-best-of-wi-fi-dx link above). I believe that microwave bands are highly underrated. Please note that my experiments are done on 20 MHz wide channels (BPSK FEC 1/2 @ 6 Mbps), not FT8/CW/SSB/FM at Hz or kHz.