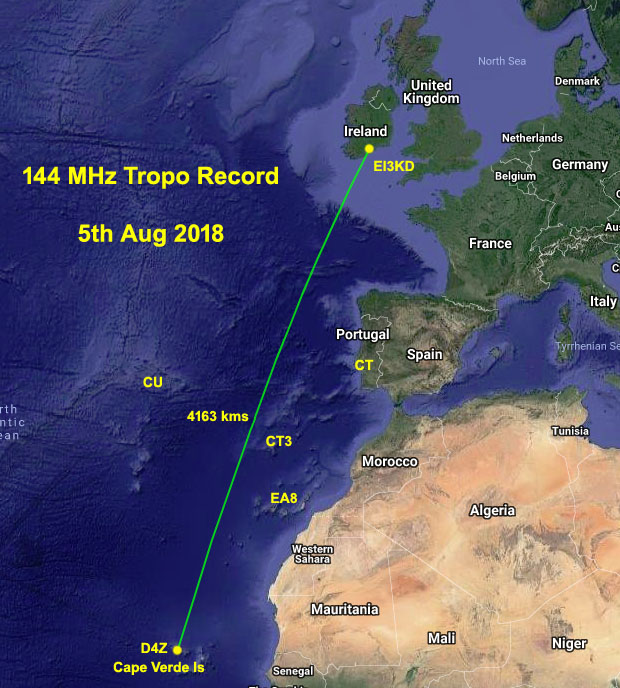 On Sunday the 5th of August 2018, Mark Turner EI3KD managed to work D4Z on the Cape Verde Islands off the coast of of Africa on 144 MHz, a distance of some 4163 kms. This remarkable contact made on CW was a new record for tropo in IARU Region 1. The previous record of 4130 kms was set back in July of 2015.

The contact was made on 144.300 MHz at about 18:26 UTC at a time when the band was also open to the Canary Islands from the south of Ireland and the UK.

Just to an idea of just how far the new record is, if the same distance of 4163 kms was measured west of EI3KD's location then it would reach as far as Nova Scotia in Canada!


The mode of propagation was probably marine ducting which is a process whereby VHF and UHF signals can get trapped between the water surface and a layer in the lower atmosphere. The result is that signals can travel over quite far distances and the path from the UK and Ireland down to the Canary Islands can produce some of the longest distances in Europe. On rare occasions, the path can extend as far as the Cape Verde Islands.

The tropo forecast below from F5LEN shows the path conditions around the time of the contact. 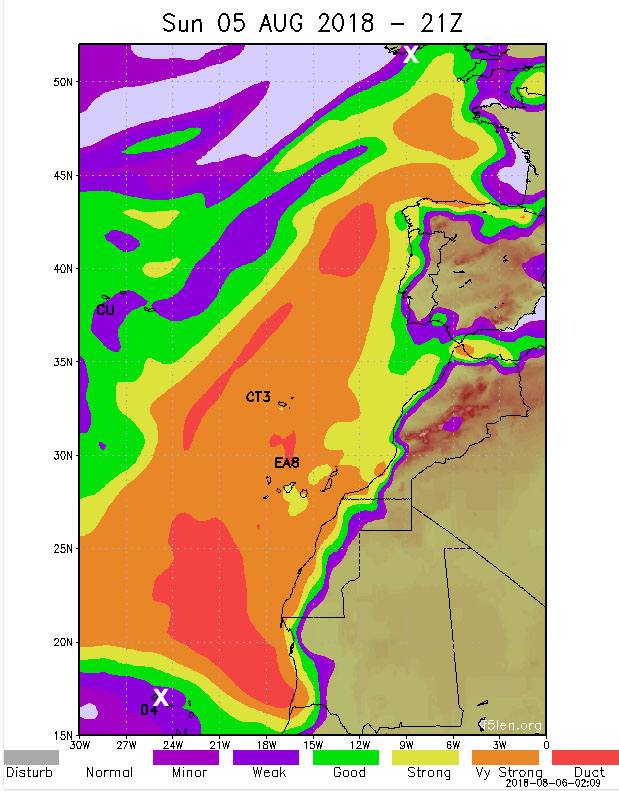 Congrats guys!
What power and antenna was used on either side?

Congratulations to EI3KD and D4Z on this record distance on 2m. I envy greatly the accomplishment!!...wish we could see ducting like this across the North Atlantic but I guess the water is just too cold.

Well done by Mark! Congratulations to him!

Thank you for this compilation, John.

I see that they you are reporting that GM4ZJI heard the D4 beacon, I honestly don't think he did because he reported the wrong frequency entirely (it is on 144.436). A previous DX spot by M0VRL also used the wrong the frequency of 144.463 (presumably a typo transposing the last two digits), and Chris tuned to that frequency or slightly below at 144.4629 and detected something that was " in and out".

I need to ask if he actually heard the CW ID as evidence to support his claim, because I initially looked around the frequency that Chris reported and there was a weak birdie but no keying at all. The correct frequency showed nothing at all here, and I suspect I would have heard it if Chris did, as we both were able to work the EA8 on tropo at that time. Incidentally, well done to Chris in that, it broke the existing long held GM tropo record by a few km. GM4FVM and I also caught the EA8 in this opening, and I have to thank ZJI for alerting FVM who then texted me on the grapevine.

But as far as the D4 beacon reception in GM goes, as they say, exceptional claims require exceptional evidence.

Just for reference, the GM4JZI reception was mentioned to in a comment on the D4C VHF & UP Facebook page.

I now have the full story clarified by Chris GM4ZJI regarding the reception report of the D4C beacon in GM.

Here is the email thread:

I noticed that your beacon spot on the 5th August of the D4C beacon on 144 has been reported by a blogger in EI.

I am not sure, but when I asked you about that on text you aid you messed up as you were busy at the time, as I can imagine.

I listened on the frequency you reported first and heard a birdie with no CW ident. Then I tuned to the correct frequency for the beacon, and could detect nothing at all here.

Perhaps you can clarify, because it is an important claim.

I notice that Gordon GI6ATZ reported the beacon in the early morning that day, also quite amazing.

On a further point, it appears that your contact with EA8TJ is a new GM tropo distance record on 144 MHz as far as I can find out! Congratulations !!!

Wishing you the best of DX in the up coming meteor shower,

I got the following two emails in reply from Chris today:

Hi David,i heard the beacon very clear for 3-4mins on 436..it then dropped down to noise level.I was responding to several messages on kst whilst filling in dx cluster.So the spot showed 463 instead of 436.To be honest i didnt think it was a big deal until i worked Ea8tj at -2 then all hell broke loose on kst! I didnt realise that my contact could be a record wow!, Hope we can catch up on the phone when youre free David,,73s


On Thu, 9 Aug 2018 at 20:11, chris claydon wrote:
For the record David which you can forward to all.When Ea8tj showed here it was very strong and up to s7! i tuned to d4c and heard the correct beacon for 3-4 mins I have nothing to gain by a false claim as it doesn't really mean anything unless i was able to qso someone from there as far as i'm concerned.For future reference if i hear something of interest i will make sure i record it and if i cant i wont report it.73's

My reply to Chris follows:

I am glad you were able to set the record straight, the reason I asked was that I was unclear with what you meant, that is all.

Of course it is fantastic news to know that D4C was received here! It means that in theory we should be able to work them one day.

I had not seen you claim it anywhere (other than that one spot on the incorrect frequency) so that also lead to my false assumption that you meant that in the text that you hadn't received it at all because you had been on wrong frequency because of all that was going on, see what I mean?

I hesitated in asking you about this because it might sound like sour grapes, (or worse), but it is very important to have the facts right, and I will contact the EI blogger with the excellent news of your confirmation of reception of the D4 beacon. We will all be very pleased to spread the news. What I didn't want to do was spread false news.

I know perfectly well that you play by the game and wouldn't claim anything that was not genuine.

Always better to record it, but I know myself I have often forgotten or not been able to record things especially when they are fleeting and I have fallen off my chair in excitement, and the tea is ready, hi. We all do that, even K1JT on his very first EME contact on JT44 (with me) forgot to record it at his end, and had to request a recording that I made for his article.

The EA8 you had is the new GM tropo record on 144 as far as I can find out, and the D4 beacon reception is one of the very furthest Region 1 tropo reception reports ever too!

Once again, many thanks for generously contacting Jim who contacted me!

Thanks for the clarification David. It's pretty amazing that the D4C beacon was heard just north of Edinburgh. Both GI6ATZ and GM4NJI seem to be some distance from the coast.

The longest sea path seems to be from the south-west of Scotland, down the Irish Sea and then the long trip to Cape Verde Is.


Further info in our newsletter. Feel free to subscribe:

Let me add that thoa was achieved with the involvement of several people and the perseverance of Mark EI3KD to accomplish this dream of him.