Friday the 29th of May 2020 was an extraordinary day with widespread Sporadic-E across Europe. While the various VHF bands up to 144 MHz were open, I spent some time listening for QRSS signals (very slow visual morse code) on 28 MHz.

To put the European stations heard in context, first see the map with distances below... 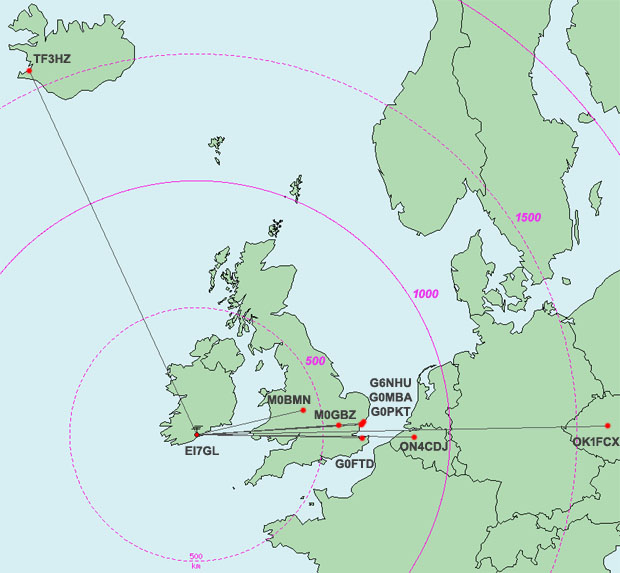 a) First Grab... The short skip on 28 MHz started early and I heard the usual stations near London, roughly 650kms. 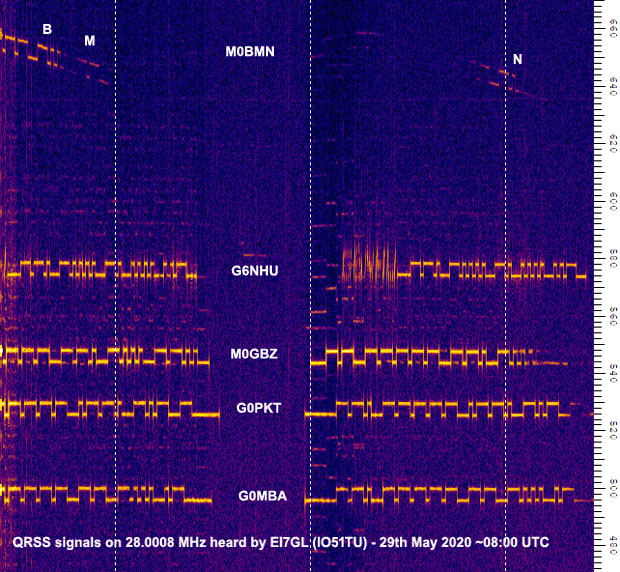 M0BMN is a lot further west and as he is just 430kms away, I had trouble getting a good trace of his QRSS signal.

b) Doppler... This is another screen grab later on. Note the double trace on some of the signals. 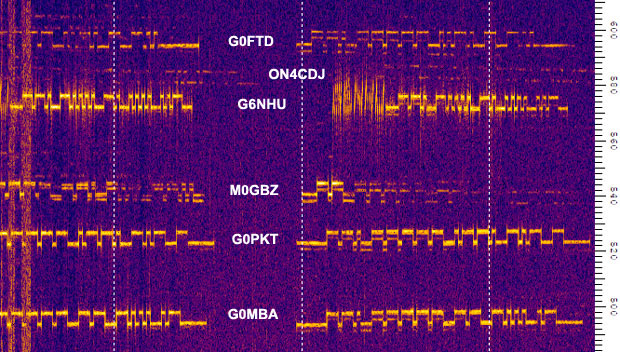 Pay special note to the signal from G0FTD. On the left, it's weak but clear. On the right, there are two distinct signals from him. The upper trace is steady and is almost as if that signal is coming from a stationary Sporadic-E cloud. The lower trace starts to diverge more over time as if it that signal was coming from something moving at speed and creating doppler shift.

I suspect it was coming from a Sporadic-E cloud that was in motion and half-ways through the second trace, it either reached a point or ionization level that it no longer supported propagation.

The other theory might be that it was aircraft scatter although I still prefer the moving Sp-E cloud theory.

c) Iceland... There was also some good Sporadic-E conditions to the north and I got a screen grab from TF3HZ in Iceland for the first. time. 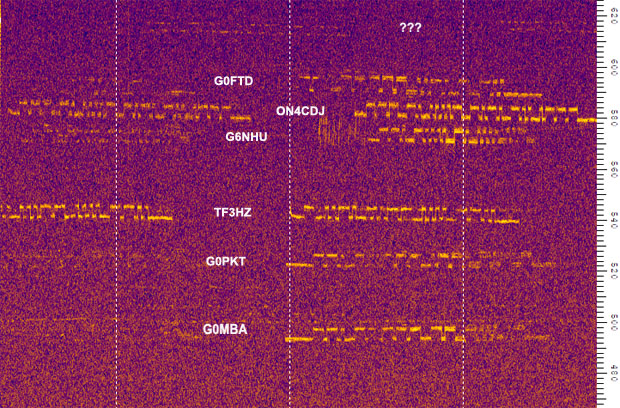 I also noted a signal up higher in the band but I'm unsure who it is? The amount of Frequency Shift Keying (FSK) seems to be lower than the rest.

(Update: The mystery signal is LB3AH in Oslo, Norway).

d) TF3HZ & M0GBZ clashing... In this screen grab, note the signal from TF3HZ. At first, he is in the clear and on his own. Then the short skip to the east improves and I note that TF3HZ in Iceland and M0GBZ near London are actually on the same frequency. 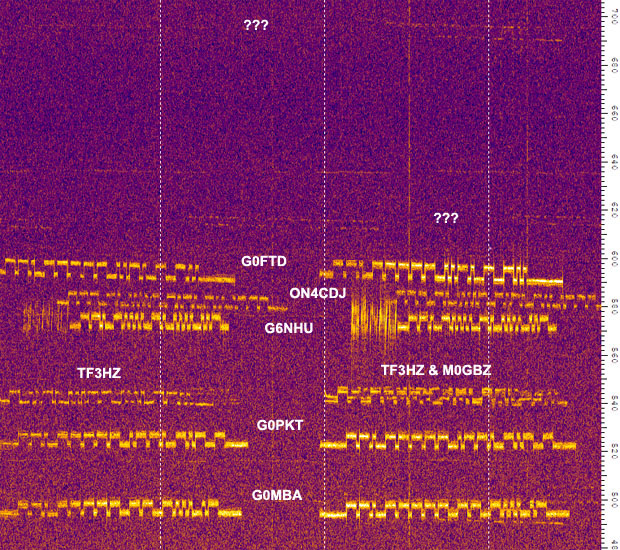 On a band where there are just 10 or so Hertz between stations, it's easy to end up on the same frequency as someone else especially if they are from a different area.

As this second grab shows, they were clashing for quite a while as the conditions were excellent. 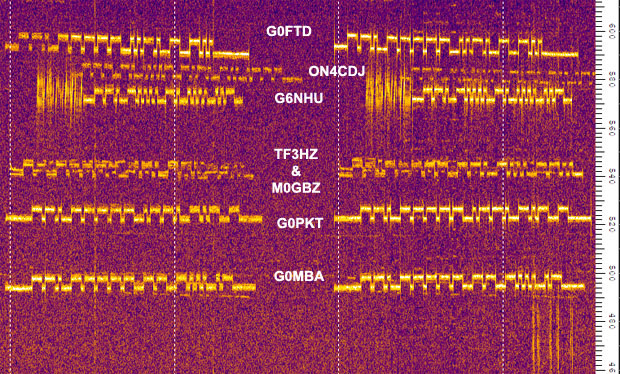 e) M0GBZ in the clear again... In this grab, you can see how on the left, TF3HZ in Iceland and M0GBZ to the north of London are still clashing. I then lose the path to Iceland and the signal from M0GBZ becomes clear again. 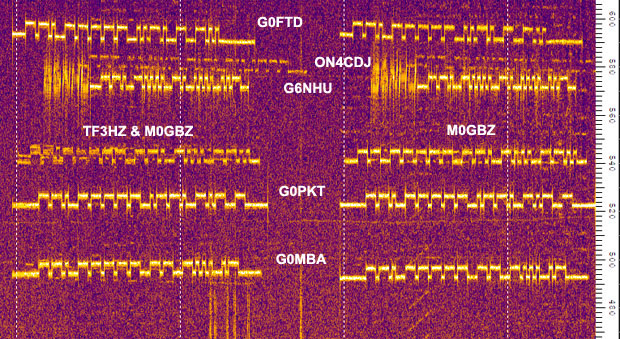 f) Trans-Atlantic... VE1VDM... All of the QRSS signals from Europe are via one-hop Sporadic-E. To cross the Atlantic, the signal needs several Sporadic-E hops.

As I'm on the north-west edge of Europe, I'm within two Sporadic-E hops of Vernon, VE1VDM in Nova Scotia in Canada. 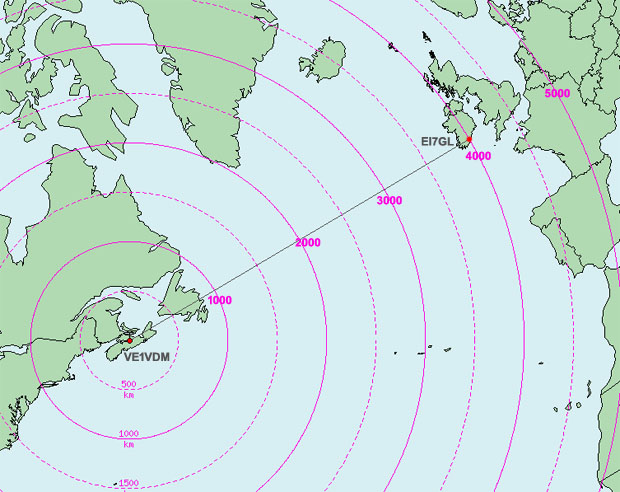 I first noticed VE1VDM's signal on WSPR on 28.1246 MHz and he transmits a QRSS signal as well just below it. He sends the letters VDM and the weak signal is shown below...

Vernon also transmits a QRSS signal on 28.0008 MHz where the European stations are... 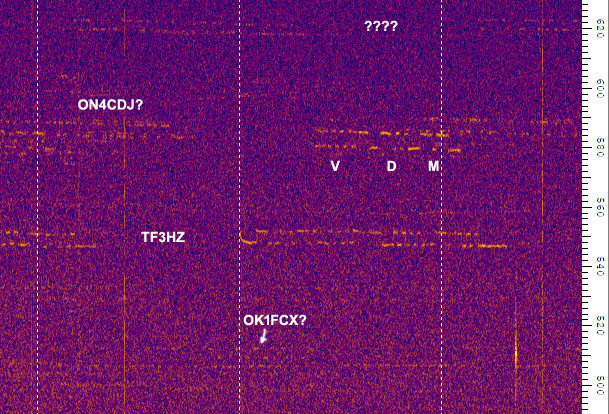 And that mysterious signal again?!?

During another grab, there was a brief opening to G6NHU near London and I could see that VE1VDM was almost on the same frequency. 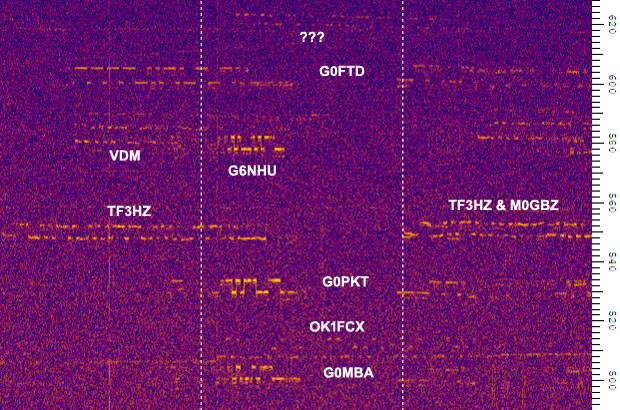 Towards the bottom of the screen, there is a very faint record of the signal from OK1FCX in the Czech Republic. He sends a signal that has three levels so it can be easy to identify even if the signal is too weak to decode.

In conclusion... Another good day for QRSS signals on 28 MHz and it's interesting to note the way signals change over time. As noted in a previous post, I believe QRSS is the only mode where you can actually see the propagation changing visually.

At this stage, I'm running out of new stations to catch! I think I have seen most of the European stations at this stage.

Very extensive report John, I really like it and appreciate all the work you put in it !
That's what it's all about....always nice to see where you've been heard, or what can be heard with our weak signals.

Keep up the good work John...all the best !