Just two days later on the 15th of June 2020, the third 40 MHz first occurred when Tim, EI4GNB in Ireland made contact with Borut, S50B in Slovenia. 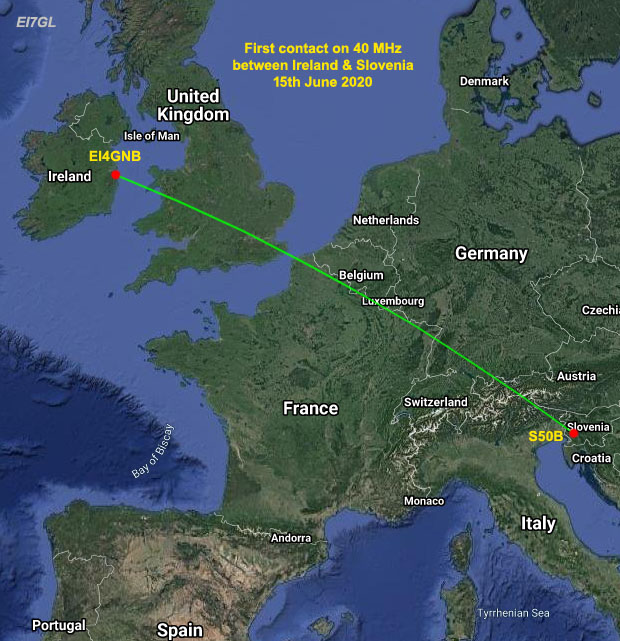 The initial contact was made on the FT8 digital mode followed by FT4 and JT65.

EI4GNB and S50B then went on to complete a voice contact on SSB with 5/5 reports each way.

The mode of propagation for the contact was via Sporadic-E and the distance was just under 1660 kms.

The contact was made on 40.680 MHz in the middle of the ISM (Industrial, Scientific, Medical) band. Both Tim and Borut noted a lot of interference from digital noises on the ISM band (40.660-40.700 MHz) so it looks like the 8-metre allocation in Slovenia is prone to interference.

I immediately went to the 8-metre band and heard the Irish beacon EI1KNH on 40.013 MHz. I sent SMS messages to EI4GNB and EI7HBB but got no response.

I also tried to make contact with Lloyd, EI7HBB in the west of Ireland for almost an hour but had no success.

Lloyd, EI7HBB also kindly sent on a reception report from his location in the west of Ireland showing reception of EI4GNB by tropo and S50B by Sporadic-E. 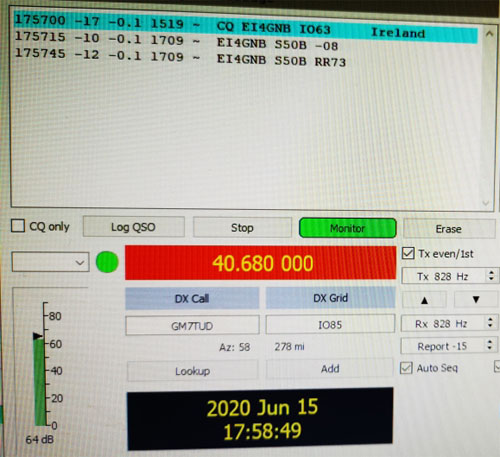 As can be seen from the screen grab, both stations at -17dB and -10dB were quiet weak.

In 2019, we saw reports of crossband contacts being made between Ireland and other European countries. In 2020, we saw the welcome appearance of two more countries who could transmit on the 8-metre band. Hopefully these results will encourage other radio amateurs around Europe to try and get permission from their respective regulatory authorities for the band.