DRM (Digital Radio Mondiale) has long been touted as a possible replacement for the analogue AM and FM modes on the radio broadcast bands. The transition to digital has proved problematic as broadcasters and listeners are happy to continue with the status quo, especially on the 88-108 MHz FM band.

While many countries have opted for DAB and DAB+ transmissions on the VHF Band 3 (175-225 MHz), some countries are looking at the option of using DRM transmissions in the spaces between the FM signals on the 88 to 108 MHz band.

From June to December 2019, a sixth month trial DRM transmission was carried out in the Russian city of St.Petersburg. The 800-watt DRM transmitter was on 95.7 MHz between the FM radio stations Studio 21 at 95.5 MHz and Comedy Radio at 95.9 MHz.

The main audio source for the trial was the Comedy Radio, which was broadcasted simultaneously as an analogue FM service (3KW) and a DRM service (0.8KW). This allowed a direct comparison to be made between the analogue FM and DRM coverage.

The results of the trial were publish in December 2020 in a paper titled..."RESULTS OF THE DRM SIMULCAST FIELD TRIAL IN FM BAND IN THE RUSSIAN FEDERATION... June to December 2019"

Some of the main conclusions were as follows... 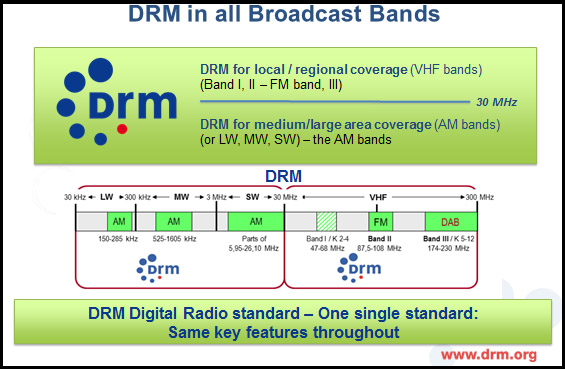 20:1 Digital Power Advantage... In separate tests done in Indonesia, it was claimed that six test points covered by the 1 kW transmitter (FM) could be served with only 50 watts of DRM power. “In testing a simulcast broadcast using 1 kW and 800 Watt with spacing distance 150 kHz between the middle frequency FM and DRM, the measurement showed no interference between FM and DRM. The DRM quality was at least equally good to FM, but the sound quality of DRM was even better than FM.”
In an article titled "Use DRM on India’s FM Band", the chair of the of the India chapter of the DRM Consortium Yogendra Pal stated..."Using DRM, in the allocated 200 kHz bandwidth, a broadcaster can transmit up to six high-quality audio services along with a host of value-added services and Emergency Warning Functionality (EWF). All digital services work without disturbing the existing analog FM services."
He also claimed that mobile phones that used for listening to analogue FM transmissions can also be used for listening to DRM transmissions as long as manufacturers allow the DRM app to access the baseband digital output.
"DRM standard can be supported natively on all mobile phones based on the already available tuners for analog FM reception. No additional hardware and, therefore, no additional design or component cost is required to enable DRM digital FM support on these phones.
The DRM App for mobile phones has already been developed and demonstrated by a number of organizations. Only the mobile phone manufacturers need to provide access of the baseband digital output. " 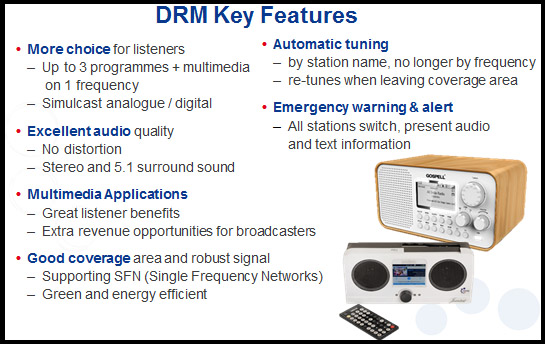 In summary... A lot of the information shown above is from the DRM industry who obviously want to push the new digital standard. However, the tests of using DRM on Band 2 (88-108 MHz) do suggest that there are more options than just setting up a new digital broadcast band elsewhere on the VHF spectrum. There are spaces in the FM band (88-108) and DRM can utilise those gaps.

Band 2 also tends to have mush better mobile coverage than the higher VHF bands around 200 MHz which are used for DAB transmissions and many listeners already have dedicated aerials for the 88-108 MHz band.

Transmitting DRM on Band 2 is also an attractive option for broadcasters in that they can use the same antennas and infrastructure. It provides them with an obvious path to gradually migrate to digital only services in the future.

The apparent 'gaps' 0.2MHz from existing FM stations (that are suggested for possible DRM) are often going to be frequencies which would be badly troubled by QRM during 'tropo' conditions (often the very reason these frequencies weren't used in the first place in the locality).
Take WLR Waterford in Ireland 97.5. The possible 'gap' 0.2 away on 97.7 may appear useable for a companion DRM, but during tropo its coverage would be hugely degraded a significant percentage of time by a main BBC outlet on the same frequency across the sea (in Devon).
The Russian study failed to look at the effects of co-channel interference from other areas of analogue FM (or even other DRM) transmissions onto a DRM transmission in the FM band, be they continuous or due to tropo, which could be a significant percentage (10-20 %) of the time

That's a valid point but remember that Russia is mostly landlocked. There won't be any of the sea ducting or water path that we get here in Ireland.

I know from my experience on Band 2 (88-108 MHz), I get loads of openings across the sea to the west of Wales ~200-300kms. The number of big signals from tropo openings overland to stations up the country are a lot less and the signals are weaker.

The really huge tropo signals that I get on Band 2 are nearly all from over the sea.