Back on the 21st of June 2021, there was a remarkable opening across the North Atlantic when a FM radio station in Spain was heard by Larry Horlick, VO1FOG in Canada for the first time. Post HERE 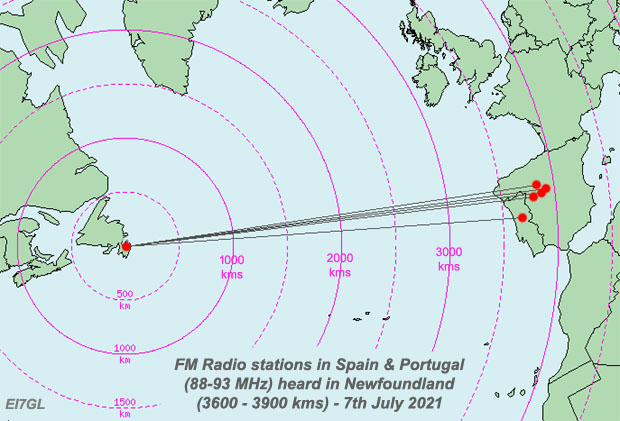 On the 7th of July 2021, there was another trans-Atlantic opening when Larry Horlick heard five FM radio stations in Spain & Portugal on frequencies ranging from 88 to 93 MHz.

Larry reports that the opening started at 12:54 UTC and lasted until about 14:27 UTC (~90 mins). Some of the Spanish stations were really strong and nothing was heard above 93.1 MHz.

During the opening, Larry tried three different antenna types on receive.... a half-wave dipole (retuned from lo Band TV to  FM BC), a new 10 el K6STI Yagi, and  a discone.

The Yagi was superior all the time even though it had to be pointed to a beam heading of 45 degrees to prevent overload and intermod from the local FM radio stations in St.Johns. (Spain is 084 deg)

Even being outside the 3 dB beam width, Larry reports that signals were MUCH stronger on the Yagi than on the dipole. The discone antenna was useless.

Credits: I must thank Paul Logan in Ireland and Jorge Garzon in Spain for confirming that these recordings. Both are very experienced FMDXers and it's great to have their expertise to call on to make sure there was no mistake.

Propagation Mode: It looks likely that it's a case of double hop Sporadic-E again with perhaps two 1900km hops. 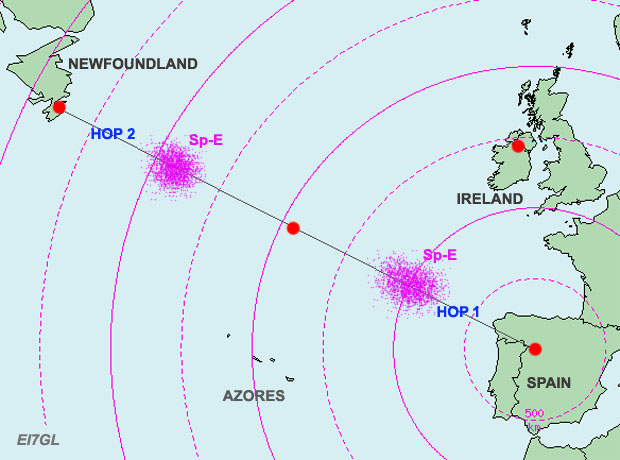 The weather map for the day shows an interesting kink in the Jet Stream in the middle of the North Atlantic and these features have been associated with Sproadic-E regions overhead.

Considering that this is the second time a Spanish FM radio station has been heard in Newfoundland in 3 weeks, it raises some questions...

I really wonder if this opening is exceptional or does this trans-Atlantic path on the 88-108 MHz band open a lot of the time? Do FM radio stations in Spain & Portugal cross the Atlantic on a regular basis?

Email ThisBlogThis!Share to TwitterShare to FacebookShare to Pinterest
Labels: 88 to 108 MHz, Band 2, VO1FOG

Hello, it is very difficult from Spain to listen to anything, with a saturated and overmodulated dial ... perhaps with a MUF of 300 and at 2000 meters high, far from transmitters, but not under normal conditions.
I only have half free the 88.5,(https://www.youtube.com/watch?v=KVPdpqyKkYc) you have to go out and be lucky, but I have not passed 1900 kms, that is, with portable equipment, not with rds and the like.(https://www.youtube.com/watch?v=2c1qL5UHMG4)
73 from EA5IUA

Rafa, it all depends on where you are. In Madrid, it is probably very difficult as it
is in most European cities. If however you are in the countryside, in a valley that is open to the west then it is possible.

The worst place to be is on top of a mountain or hill as there will be too many signals. You need some place that is open to the west with a low horizon but screened from all the other directions.

As far as I understand almost all areas of Spain, rural and urban have quite full FM dials. In Europe probably only Italy is a worse place to be an FM Dxer.

As for the VO1 - EA path. For years I believed this path MUST have been showing high MUF's based on the number and intensity of openings at 50 mhz that were showing on online prop loggers.

I wouldn't be surprised if it's a possibility every season.

We are though, according to many who watch 88-108 in the middle of one of the best - if not THE best FMDX seasons ever observed. So that may be helping. The highest Transatlantic Sp-E MUF ever seen has happened this season. It's all new.

if not THE best FMDX seasons ever observed

that may be true if you are in a certain location but in my part of Scotland its been garbage and i was using more or less the same gear as Paul and my fm dial is more or less pretty empty , i watched with interest when paul was getting AZR CNR etc and not a trace here and when he was logging canada it was dead , the only openings i have had so far are mostly 1 hop Es to france Italy Spain hence i have taken down the Korner 9 and sold my sdr and just have a 5/8th vertical and a TEF 6686 for casual dxing as the boredom kicked in , 73 David

With the FM broadcast band now extremely crowded in most countries is has been become vey difficult to receive weak distant stations. Also multielement beams are now very difficult to find. However older FM tuners that use ceramic filters in the usual 10.7 MHz IF stages can be improved by changing the relatively wide filters for narrower ones. These filters are usually three legged , about 12 x 10 mm in size. I think the usual ones are 200 t0 250 kHz bandwidth to cater for stereo and RDS signals. If units with 180 or 150 kHz specification are fitted instead , selectivity will be much improved with better ability to avoid strong adjacent channel signals. Ability to decode stereo and RDS will however be reduced .
Searching the internet for Murata ceramic filters will bring up several suppliers of suitable choices if filters. Overload from a very strong FM transmission a MHz or more away can be much reduced by means of a high-Q series tuned circuit across the aerial ( antenna) input connection.
Des Walsh EI5CD

Re Des, EI5CD: I suspect most of the serious FMDXers these days are going down the SDR route where segments of the band can be recorded for future analysis. It would be interesting to see any designs for high Q band pass filters if you come across any.

Re David: Interesting to hear that the DX is not so great in Scotland. It's a pity you took the beam down as most of the most interesting paths on Band 2 are from your location to the NW/N/NW. Single hop Sp-E to the south to Spain or Italy is nothing special.