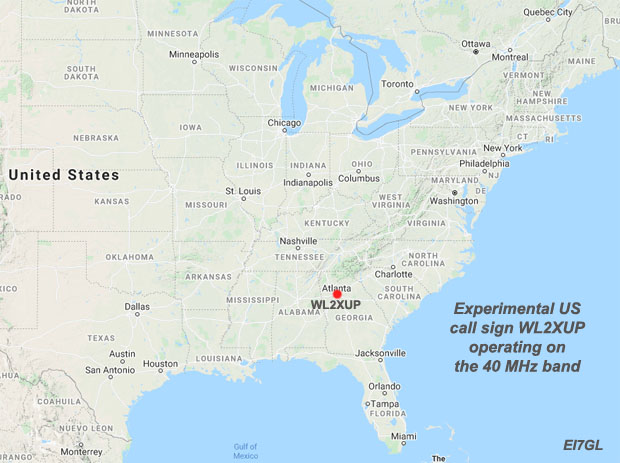 In June of 2021, the FCC in the USA issued the experimental call sign WL2XUP to conduct tests on the 40 MHz band. The owner of the call, Lin Holcomb (NI4Y) reports that the station is now on air.

It is hoped in time to upgrade to a log-periodic antenna pointing at Europe.

Location: The experimental WL2XUP station is located near the city of Atlanta in Georgia in the SE of the USA. It is in the EM73 locator square. 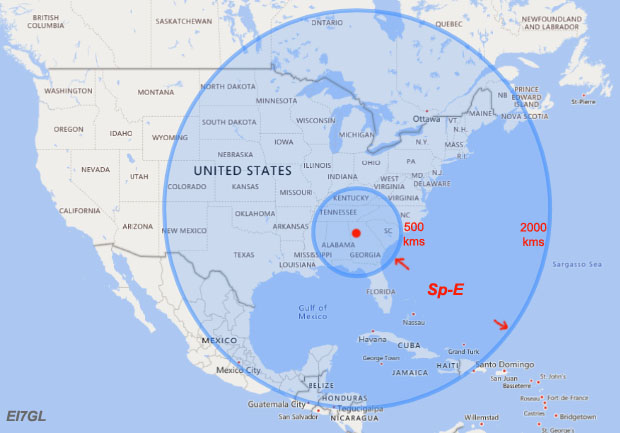 Propagation & Range - What to expect: The band is affected by several propagation modes. Let's have a look at them...

a) Tropo: It's likely that it will have a range of up to 200kms locally but it's unlikely that there will be many listening from that small area.

b) Sporadic-E: This will be main propagation mode from April to August every year and it WILL be heard all over the eastern half of the United States. The map above shows the likely range being in the range of 500kms to 2200kms. The most consistent signals should be in the 1200 to 1800km range.

In terms of double hop Sporadic-E, there may be a skip zone out going from Arizona to Montana but anyone in California to Washington should get signals in June and July. The one issue for the western states may be interference from SNOTEL stations on the same band. 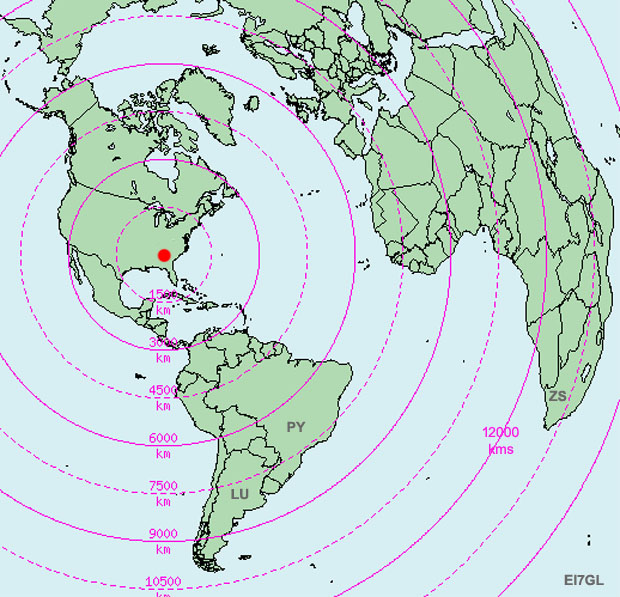 Looking further afield, there will also be times in June and July when there will be multi-hop Sporadic-E to Europe, a distance of about 6000-8000kms.

Trans-Equatorial Propagation (TEP): The experimental station is also well placed for tests to South America in May and November. While it is too far north for TEP, just one Sporadic-E hop is required to the south to open up the path to Argentina (LU), Uruguay (CX) and Brazil (PY).

F2 Propagation: The 40 MHz band will be certainly be impacted by the rising solar flux as we approach the peak of the next sunspot cycle. The 40 MHz band will open a lot earlier than say 50 MHz and it could prove to be a useful resource for European stations monitoring the trans-Atlantic path.

In Conclusion: This new experimental station is a very welcome development and it establishes a presence on the 40-MHz band in North America. It may also allow for more US stations to follow this lead and apply for similar permits.

The really big challenge now is trying to raise awareness amongst the amateur radio community in North America and making them aware of the 40 MHz band and the activity on it.

This is a terrific location for US hams to monitor, as 80 million people live within 500 miles of Atlanta. And all of the HF/6 radios can receive here.

It's very cool of course. Still, what's the point over and above doing the same at 50.xx mHz? We know there's skip on low-band VHF. Is there thought of widening the band? What is the end game?