Back in December of 2021, I had a post titled "More information about the proposed Amateur TV experiments at 29.250 MHz & 51.7 MHz" up on the blog and it received quite a lot of interest.

First off, some information. The map above shows the path... M0DTS is located in the NE of England and he was using an online Kiwi Software Defined Radio (SDR) which was located in the state of Pennsylvania.

Rob was transmitting his Digital Amateur TV signal on 29.250 MHz using 100-watts into a 3-element Yagi. The Kiwi SDR in the USA was using a simple loop antenna for reception of the signals. As the SDR was online, Rob was able to log in and see if his DATV transmissions were being received. 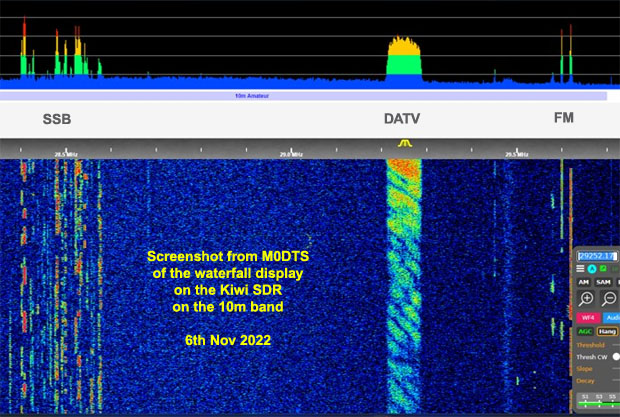 The initial tests were done on the 6th of November as can be seen from the screen capture above.

On the left are the SSB signals the Kiwi SDR was receiving down around 28.5 MHz. On the right, you can see some FM signals up around 29.6 MHz. Rob's DATV signal can be clearly seen at 29.250 MHz.

M0DTS writes... "Been watching my 29.250MHz DATV test signal on a kiwisdr in Pennsylvania... there is hope! This was 66Ks DVB-S2, Lots of frequency fading but on peaks maybe it will just work in DVB-S2... I can also do DVB-T, but today was just gauging signal strengths." 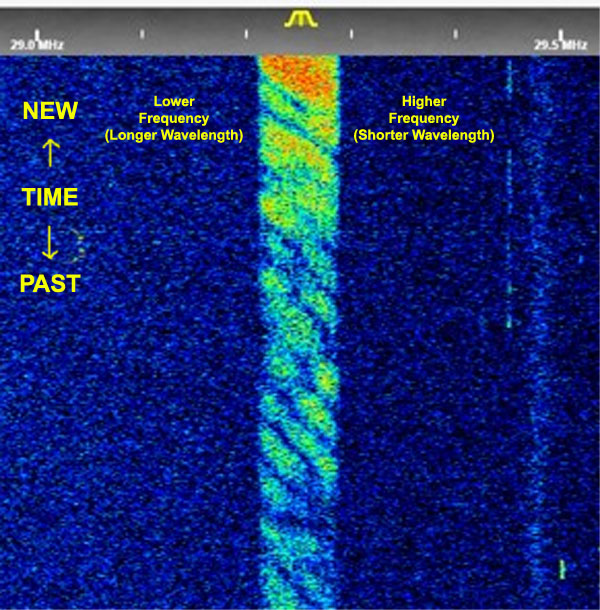 There's a lot of information in that waterfall display if we examine it closely. First off, left to right is frequency and up and down is time.

What's fascinating is that you can see in the DATV waveform where the signal is being cancelled out. It starts at the higher frequency and as the conditions change over time, the 'notch' moves lower in frequency as the longer wavelength signals cancel out.

As you might imagine, losing big chunks of the digital video signal plays havoc with reception.

Back in the 'old days'.. say the 1970's and 1980's, there were times during the peak of the sunspot cycle when broadcast TV signals around 45-55 MHz were seen around the world. At the time of course, it was analogue TV but the F2 signals were noted for being highly distorted as different parts of the signal were missing. 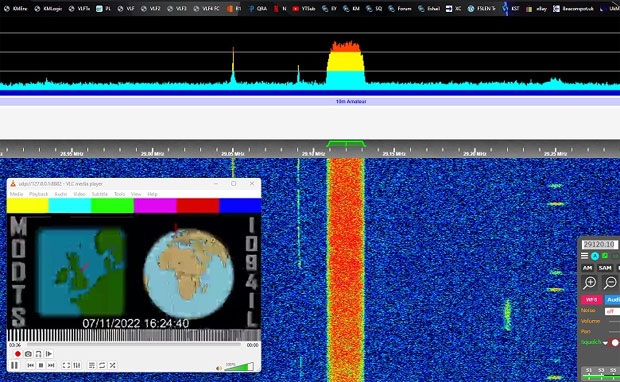 On the 7th of November, Rob managed to successfully send an amateur TV signal across the Atlantic when the signals were stronger.

In conclusion: On the face of it, sending a signal across the North Atlantic on the 10m band is no big deal. It has been done countless times on CW, SSB, FT8, FM, etc.

It's not the same as say Slow Scan TV (SSTV) where a single image is sent over SSB. What makes this significant is that it's actual video.

The amateur TV community have been experimenting for the last few years trying to compress television signals into smaller and smaller bandwidths. In the UK, they're been doing this at 71 MHz, at 146 MHz and the higher amateur radio bands.

With the improving conditions on the HF bands, experiments like this are now a possibility on bands like 29 MHz and perhaps in time at 51 MHz as the sunspot cycle improves.

Re C4FM... The chances of any ATV signals interfering with any C4FM signals is very low. It's really pointless worrying about it.