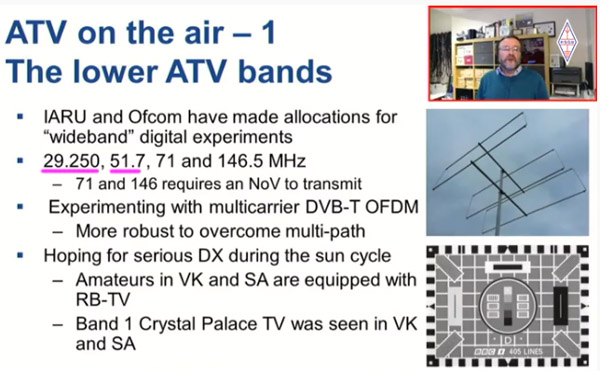 In a previous post in August of 2021, I outlined how some radio amateurs in Europe plan to experiment with digital ATV (Amateur TV) on the 10-metre band in the Summer of 2022. That post generated quite a bit of interest.

On Monday the 6th of December 2021, the BATC streamed a YouTube presentation about current Amateur TV techniques and activity as part of the RSGB Tonight at 8 series.

While the video is about 75 minutes in length, the piece I found really interesting was about the proposed ATV experiments at 29.250 MHz and 51.7 MHz. They refer to these as the 'lower ATV bands'.

Amateur TV up to now has normally been used on the UHF and microwave bands. This new development at 29 MHz and 51 MHz will potentially allow ATV signals to be sent on frequencies which will achieve much greater distances via the ionosphere - i.e Sporadic-E and F2 layer.

I find it amazing that there is the potential of sending amateur TV signals between say Europe and  North America on the 10-metre band.

The presentation with time guides are shown below...

I am told that the numbers involved are likely to be small with perhaps something like 20-30 stations taking part. Special boards are being developed at present and no doubt, these will be be got ready for the Sporadic-E season next May.

It would be very interesting if some radio amateurs in North America got interested in this project.

Um...excuse me but from what I understand the ATV 10m signals are 500khz wide!

So, a strong signal wipes out the AM window, FM gateways, FM input frequencies and may QRM the FM calling channel. That can't be right can it? This would be a perfect mode for a 500khz allocation on 8m!

I suspect the level of activity will be at a level where interference is unlikely. It's only a few guys exchanging TV pictures as opposed to some sort of ATV repeater that is on 24/7.

The main thing is that it is experimental and people are trying to push the boundaries of what might be possible as opposed to the same old usual stuff that has been done countless of times before.