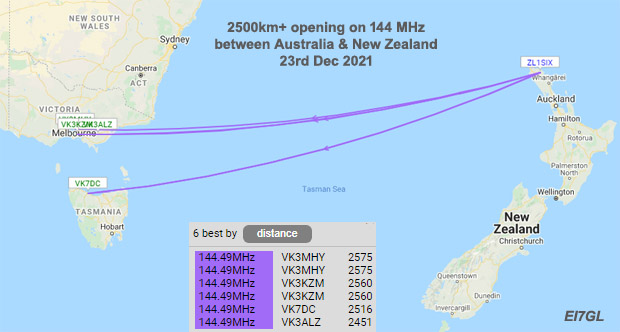 23rd December 2021: At the moment, stations in the southern hemisphere are in the middle of their Sporadic-E season and at times, there are openings as high as the 144 MHz band.

The above is an example of what looks like a mixed propagation mode opening between New Zealand and the south-east corner of Australia.

ZL1SIZ in the far north of New Zealand was sending out WSPR signals on 144 MHz and these were received by four Australian stations with distances in the range of 2451 to 2575kms.

How do we know it was likely to have been Sporadic-E? All of the reception spots are shown above and they are all from a small time window with just six minutes for the stations in Victoria. If it was 100% tropo ducting then we might expect to see more reports over a much longer time period.
How do we know it was likely to be due to mixed propagation mode? Simply because the distance is further than what is possible with one Sporadic-E hop... i.e. about  2300kms. 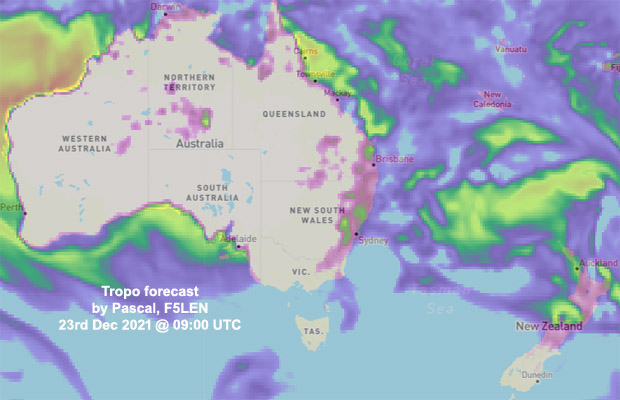 The tropo prediction map from F5LEN suggests that conditions were reasonable over the ocean at the New Zealand end.
ZL to VK6 on 144 MHz??? While the opening or distance described above isn't that exceptional, it does give a hint at what might be possible at some stage.
A few days ago, I had a post up about about a 2700km opening from Western Australia to New South Wales. Now the example above shows an opening from Victoria to New Zealand.
Is a 5000km opening on 144 MHz between New Zealand and the west of Australia possible??? 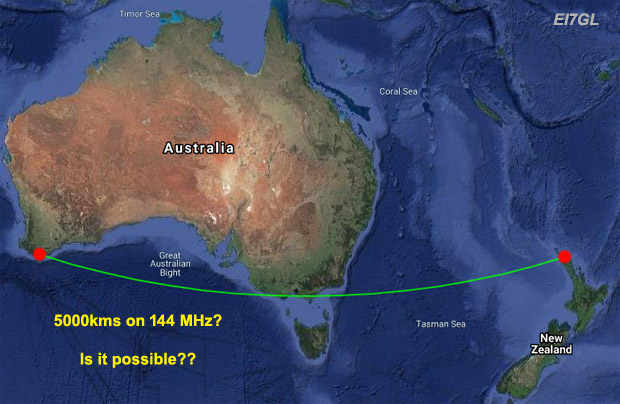 There are often tropo ducts in the Great Australian Bight to the south of Australia and in the Tasman Sea between Australia and New Zealand. Could some exceptional Sporadic-E opening coincide with a large tropo duct?
Best mode??? WSPR with its two-minute transmission cycles probably isn't the best mode for this as the Sporadic-E openings along the route may be short in duration. Having said that, the guys in Australia and New Zealand have a very successful WSPR network going on the 144 MHz and the information from the WSPR reports could show what parts of the path are open. It may be down to individuals then trying to make contacts on the FT8 or Q65 frequencies.
Links...
1) For more reports on long distance paths on 2m, see my 144 MHz page.
Posted by John, EI7GL at Friday, December 24, 2021