The long process of getting back on the air continues. I've put up antennas for 2m and 70cms in the attic of the house so at least now I have something that might be considered semi-permanent. If I go off the radio again, it's not such a big deal to get going again and the aerials won't get destroyed by the weather.

In the last week, I checked the Westflex 103 coax cable going to where the old CB vertical used to be. Using my old home brew power meter and my old Yaesu FT-290R, I established that the loss for the 20 metres or so of Westlex 103 was about 2dB at 145 MHz. This means that it should be well under 1dB at 28 MHz and that includes having a back to back SO239 connector in line. So the coaxial cable is working fine and shows no sign of water ingress. 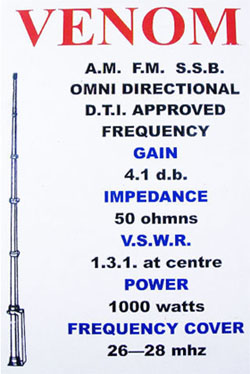 About a fortnight ago, I purchased a CB half-wave vertical from Long Communications in Donegal. The model was a Venom which I believe may be from a company called Sigma.

Considering it was only €35 with an additional €12 for delivery, it's hard to say it is in any way expensive. In contrast to some of the verticals for the HF bands, it's incredibly cheap.

Some of the specs should be taken with a pinch of salt.

Frequency....26 to 28 MHz.... My tests shown below suggest that it won't be resonant anywhere near 26 MHz. Without an antenna tuner, I think 27.0 to 29.7 MHz would be part of the spectrum that the antenna could be adjusted to.

Construction and Assembly.......All the parts come in a small plastic bag which includes two U-Bolts, three screws, three washers, 3 nuts, 4 jubilee clips and a small plastic seal for the top of the antenna. All pretty obvious and the antenna can be assembled in about 10 minutes.

There are Blue marks on the aluminium sections to show how far each section should be inserted into each other.

This YouTube below from someone in the UK shows what it looks like out of the box including the Blue marks for adjustments.

One of my biggest fears was that the antenna would be really flimsy once it was constructed. To be honest, it looks fine. I can't really say the construction matches the cheap price, it seems fine.

Tuning...I mounted the antenna on a 4 metre pole and checked the VSWR with the internal meter on the Kenwood TS690. When I had the lengths adjusted to the Blue marks, the centre point seemed to be around 28.0 MHz. I then shortened the antenna so that the VSWR plot now looks like this. 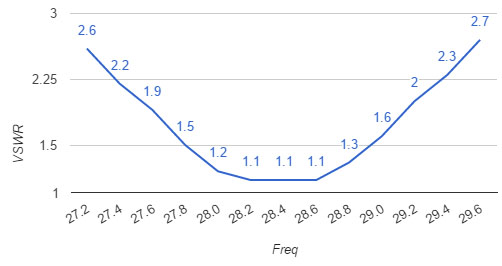 Some observations and notes....

1) As I shortened the antenna the VSWR curve below the centre frequency seemed to match that above. As a result, I have inferred the plot below 28.0 MHz as I cannot transmit there.

4) If the length of the antenna was assembled to the Blue marks then the centre frequency was 28.0 MHz. This means the VSWR was at or below 1:1.5 from about 27.35 to 28.65 Mhz. This might be an issue for someone who wants to use the bottom end of 27 MHz as there wasn't much scope for making the antenna much longer. It should tune up fine with an antenna tuner but I'd guess most CB stations would be unlikely to have one.

5) My antenna was mounted at 4 metres above ground level. The VSWR and centre frequency may well change if the antenna was at different heights.

Performance.....Too early to say but I am hearing local Churches broadcasting at the top half of 27 MHz from about 50-60 kms away so it seems reasonable. It is certainly no worse than the old CB half wave I used to have.

Overall.......Time will tell if it survives the Winter gales but the mechanical construction seems reasonable. If I had it way above the house then I suspect it wouldn't last long. But at 4m, I would expect it to last the first winter anyway. Other than that, the performance seems as expected.
Posted by John, EI7GL at Friday, November 18, 2016

Hello John, interesting article. Although I use a CB antenna myself in another way (multiband). But the most interesting thing was the links to this finnish site about Irish Parish radio collections. Tnx! 73, Bas

Yes Bas, those broadcasts are like beacons for 10m propagation. :o) I think a lot of them are in the region of 20-50 watts so they should be easy to hear when the band opens.